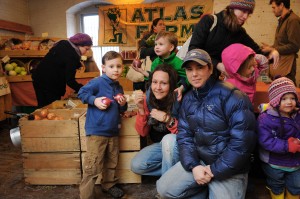 With a motto of “Local agriculture is everyone’s business,” Kristin Barry and Shelly Risinger of Appalachian Naturals have built a thriving local company that helps consumers enjoy the flavors and quality of locally grown food throughout the year. Their sauces, dressings, dips, salsas, and other condiments each contain ingredients produced by Massachusetts farmers, from Cape Cod to the Berkshires. Supporting local agriculture is as integral to Appalachian Naturals’ identity as its creative flavor pairings, which have gained a strong and loyal customer base throughout the northeast and the mid-Atlantic regions.

Kristin and Shelly settled in Goshen in 2003 to be close to family after several years as hands-on owners of The Crossroads Restaurant in Joshua Tree, a popular rock-climbing destination in the high desert of southern California. Their home-made salad dressings at The Crossroads were so popular that customers brought in mason jars to fill up whenever Kristin and Shelly took time off. Inspired by customers who had urged them to “bottle this stuff,” they launched Appalachian Naturals in the Western Massachusetts Food Processing Center at the Franklin County CDC. As the company grew, they consolidated production on their property in Goshen – renovating a large barn into an 800 square foot energy-efficient production facility.

The harvest rules this family-run business: from mid-July to October, more than fifteen tons of locally grown produce are delivered to be made into savory salsas, tomato puree, and a variety of other products. Each recipe is made from a majority of local ingredients. Their Salsa Veracruz, for example, is 99% local (except for lime juice and salt). Appalachian Naturals is the only local company that prepares tomato puree from 100% local organic tomatoes and packs it in glass jars. At the peak of the season, they are capable of processing 1,800 pounds of tomatoes daily using just two 100-gallon kettles.

Through its regional distributors, Appalachian Naturals currently offers more than 25 products that can be purchased at natural foods stores, coops, general stores, gourmet markets, and farm stands. By using local ingredients that are available year-round, including milk, honey, and maple syrup, Appalachian Naturals has expanded its production capacity and sales while maintaining their commitment to using local ingredients.

Increased sales is just one measure of success. Appalachian Naturals is committed to a business model that represents a level of production that is personally sustainable and supports creativity and a healthy work/life balance. Kristin and Shelly take pride in being caring employers and building and maintaining an efficient production facility with a very small carbon footprint.

For helping bridge the gap between local agriculture and prepared foods, leadership in ethical and sustainable business practices, and a commitment to a supportive workplace, CISA is proud to honor Appalachian Naturals as a Local Hero.