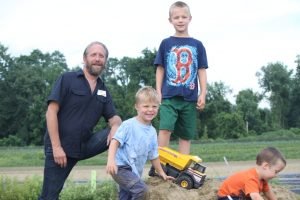 Enterprise Farm was one of the first Massachusetts farms to be certified organic in 1987, just after owner Dave Jackson graduated from UMass. Since then, the farm and its founder have played a leadership role in the rapid growth of organic farming in the region.

Dave, whose ancestors settled in Northampton before 1700, returned to the Valley to study agriculture at UMass. While a student, he began farming at his present location on River Road in Whately’s fertile floodplain. Dave frequently collaborated with other growers to create new methods of bringing product to market, aggregating Valley produce for New York City chefs and partnering in the creation of Happy Valley Organics in 1994 to wholesale the products of several Whately farms to large retailers in the Boston area.

Consumer demand for organic food grew steadily during the next fifteen years, at the same time that CISA’s “Local Hero” marketing effort was raising awareness of the importance of supporting local farms. In response to requests from customers at area farmers’ markets, Enterprise launched a CSA program in 2008. The CSA has since became the farm’s major focus, and now serves 800 households with pickup locations in Northampton, Springfield, and Boston as well as at the farm.

Enterprise has a well-deserved reputation for innovation and leadership. The farm piloted an effort to bring healthy food to urban communities by launching a “mobile market” in Springfield and Somerville; non-profits now run the program and Enterprise supplies produce at wholesale rates. Dave was also instrumental in the creation of CISA’s Emergency Loan Fund to support farmers struggling in the aftermath of Hurricane Irene in 2011.