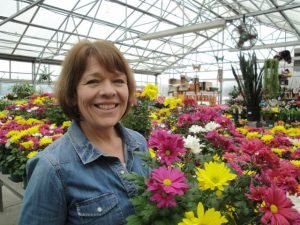 As suburban housing replaced the farm fields of her youth in Hampden County, Karen Randall steered Randall’s Farm and Greenhouse through multiple transitions, growing the family business into one of Ludlow’s largest employers. Staying true to its agricultural roots, Randall’s maintains longstanding relationships with local farmers, offers a large selection of locally grown food and other products, and serves as an agritourism destination that connects new generations with farmland.

The farm began in the 1950s when Karen’s father raised poultry and eggs on farmland a few miles north of the future Mass Turnpike. He delivered to restaurants and stores all over the Valley. Along his delivery route he purchased fresh asparagus, potatoes, and other local crops to sell at his small Ludlow farm stand with their own eggs and chicken. Always eager to try new things, he expanded the farm, growing 15,000 tomato plants each spring on rented land and planting vegetable crops on his own 40 acres. In the 1960s he added a successful pick-your-own strawberry operation that ran for several decades.

Karen, who resumed working in the business after college, assumed a leadership role after her father died in 1987. In 2000, Randall’s stopped raising vegetables and began purchasing from local farmers. An innovator like her father, Karen has adapted to changing times by expanding the store’s offerings to include a bakery, deli, and catering, as well as popular cooking workshops. Seasonal activities attract families and serve as reminders of Ludlow’s agricultural history, including a corn maze, fall festival, and scarecrow contest.

Randall’s Farm today is a far cry from the original farm stand. In the 50 years since the first retail structure was built on the property, the business has expanded to include a permanent retail greenhouse, a 12,000 square foot post & beam retail store, and a half-acre garden center. The first farm stand building has been preserved and operates seasonally as “Elsie’s Creamery,” serving homemade premium ice cream made from fresh local ingredients. Open 364 days a year for 12 to 14 hours each day, Randall’s employs more than 100 staff.

Randall’s meets a critical need for both consumers and producers of local food in Hampden County, and serves as one model of successful adaptation for local family farms during changing times. Their motto, “Best Fresh,” captures the company’s commitment to quality, service, and integrity, says Karen, who identifies first and foremost as a farmer. CISA is proud to honor Randall’s Farm and Greenhouse as a Local Hero.