Bonita and Dan Conlon of Warm Colors Apiary in South Deerfield have set a high bar for local honey production, educated countless new beekeepers, and emerged as leaders and advocates in the beekeeping community.

Dan’s interest in bees started early, when he worked on a vegetable farm near his hometown in Southeastern Ohio. The farmer kept bees on the farm, as was the norm for fruit and vegetable farmers at the time, and noticed that they held special interest for Dan. He invited Dan to help out with the hives on weekends, helping to developing Dan’s nascent passion. “He was a good beekeeper,” Dan says today. “I still find myself quoting much of what he taught me.”

Over the decades—and alongside careers as a professional touring musician and in food service and administration at Northfield Mount Hermon School—Dan continued to keep bees, anywhere from two to 100 hives. 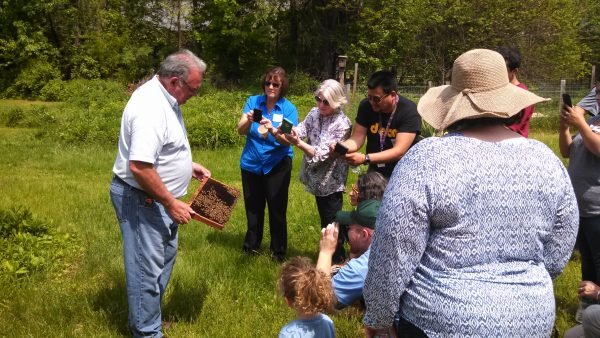 Dan leading a workshop at Warm Colors Apiary in Deerfield

In 2000, Dan and Bonita decided that it was time for Dan to pursue beekeeping full-time, and Warm Colors Apiary was born. Just six months later, Bonita was laid off from her job as a counselor, and the two of them worked quickly and hard to build Warm Colors into a business that could support them. “We got serious very quickly!” says Bonita.

Today, Warm Colors Apiary is established as one of the best-known and most highly-respected beekeeping and honey producing operations in the area. Their honey, honeycomb, beeswax products, and more are sold out of the small farm store on their property in South Deerfield, and directly to grocery stores, restaurants, and dining services including UMass Amherst and Mount Holyoke College.

Dan manages around 1,000 hives, several hundred of which are kept on the Warm Colors home site. The rest are sited around the region, sometimes to support the best honey production, and sometimes to provide pollination to other farmers. One hive of bees on an acre of cucumbers will increase production by up to 40%, so farmers will hire Dan to bring hives to their farms as different crops flower.

Another cornerstone of the business is supplying bees, hives, and equipment to beekeepers throughout the Northeast. Each year, Dan brings around 1,000 packages and nucs, which are starter bee kits, up from Georgia to fill local hives.

The final primary component of the Warm Colors Apiary business is education. Each year, 30 new beekeepers pass through Dan’s multi-session beekeeping class, and many more attend Dan’s one-off workshops and lectures. Dan says, “It’s part of our mission to educate people about beekeeping. It’s a thrill to get people who are kind of interested in beekeeping and then see how they’re awed once they start to learn about bees.”

Bees, along with other native pollinators, are famously under threat. This poses real risks to our food supply, and beekeepers have led the fight against this loss. Dan’s advocacy work, conducted through leadership roles in the Eastern Apicultural Society, NOFA/Mass, the Russian Honey Bee Breeders Association, and the Franklin County Beekeepers Association (to name just a few!), has focused on this issue from multiple fronts.

One of the main threats to bee populations are Varroa mites, which can decimate bee colonies, and which also introduce viruses. The most commonly kept honey bees, which are descended from Italian breeds introduced in the United States in the late 1800s, are highly susceptible to mites and disease. Warm Colors Apiary is part of the Russian Bee Program, which was developed by the USDA in the late 1980s to promote more resilient Russian bees to beekeepers, and to build genetic diversity and strengthen the stock.

Another goal of Dan and Bonita’s advocacy is focused on protecting habitat for bees and other native pollinators, including advocating for MA H. 2113 – An Act to Protect Massachusetts Pollinators. Says Dan, “It’s not just beekeeping for us: it’s being involved in nature, working with the educators and researchers, getting involved in the politics.”