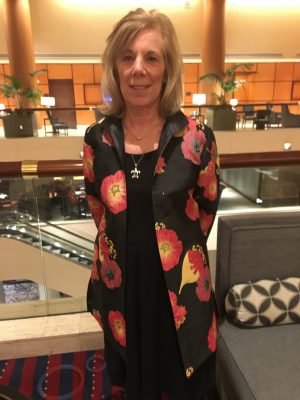 Joanne Lennon, the Food Service Director at Chicopee Public Schools, has built a farm to school program in the Chicopee school district that stands as a model of how public schools can introduce food sourced from local farms into their menus and integrate farm and garden education into their classrooms.

When Joanne took over as Chicopee’s Food Service Director in 1991, the district’s lunchrooms were serving mostly convenience foods: “from the freezer to the oven,” says Joanne. Improving the quality of the food by reintroducing scratch cooking was the first order of business, and luckily the schools were still equipped with fully functional (if outdated) kitchens and run by staff with cooking expertise.

This dedication to serving quality food, prepared with in-house skill, laid the groundwork for the farm to school efforts that Joanne started to explore a decade later. In 2003, when Joanne was president-elect of the Massachusetts School Nutrition Association, she was part of the small team that wrote the grant that ended up funding exploratory work around developing farm to school programs in the state. Says Joanne, “No one was really buying local here at the time—it was really an up-and-coming thing, and we wanted to find out if we could do it.”

The grant, a result of the Massachusetts Vitamin Litigation Project, funded Kelly Erwin’s early work developing relationships between farmers and school food service staff. Kelly went on to found and serve as Executive Director of Massachusetts Farm to School, which continues to build and support farm to school efforts all over the state.

Although Joanne’s farm to school work goes back 15 years, it remained a relatively small part of the school district’s purchasing until several years ago. “I always tried to buy a little more local every year, and then four years ago Chicopee Public Schools got a grant from the Kendall Foundation for ChicopeeFRESH, a new program that enabled us to make more connections, set up systems that could be copied by other school districts, and do this work on a larger scale. We went from 1-2% local to 15-18% local because we were able to hire someone to concentrate on this process,” says Joanne. “It’s clear to everyone—the administration, parents, staff, students—that this work is a huge asset to the whole community, so now we have a permanent Sustainability Coordinator!”

This commitment to incorporating locally grown food and garden education into a large meal program (Chicopee Public Schools serves 10,000 meals a year, and Joanne manages a budget of $5 million!) is the result of personal conviction. Joanne says, “This is my favorite part of the job, because I grew up with a garden as a girl, and I know how important that food was in our kitchen. I want kids to be familiar with fresh vegetables, and to live that healthy lifestyle.”

For her forward-thinking approach and years of dedication to bringing local food into Chicopee Public Schools, CISA is proud to present Joannne Lennon with a 2018 Local hero Award.