This article is one of four written by CISA for publication in the Daily Hampshire Gazette’s “Climate Change at Home” series, reporting on the current impacts of climate change to daily life in western Massachusetts. CISA contributed the perspective of climate change’s impacts to local farmers and our food supply.

“Being a farmer and a pharmacist, I understand the symbiotic relationship of both,” says Hameed Bello, owner of Agric Organics, a new urban farm in Wilbraham. There, he and his wife Ayo are intent on building a farm that can be a multi-faceted resource for their community, supplying farm fresh food, health, and education while withstanding the challenges of climate change. 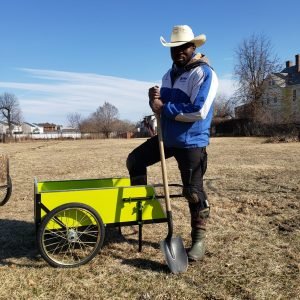 Agric Organics sits on about 10 acres of land just south of Rt 20 on the outskirts of Springfield. Now raising crops on three of those acres, “We pride ourselves in growing with organic and sustainable methods,” Bello says. “We do have a small orchard on the property, but most of our focus is on fresh produce.”

The couple broke ground just last year and have since withstood two wildly different growing seasons, 2021 one of the wettest in recent memory and 2022 one of the hottest and driest.

It’s been a learning experience that we are in some ways grateful for,” says Bello, thinking positively. “Now we know how to adapt going forward.”

Hameed and Ayo Bello both immigrated to the US from Nigeria separately during their childhoods. Both grew up with a hands-on familiarity around agriculture. Neither set out to be a farmer, and each works another job besides, Hameed as a pharmacist and Ayo as a consultant. Yet still, farming found them. 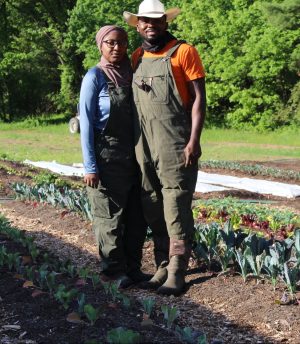 “Growing up in Africa, natural medicine sparked my curiosity,” Bello says. “And I wanted to be of service.” He eventually focused his studies on phytochemistry, the science of chemicals derived from plants, and attended Western New England University in Springfield, earning his pharmacological degree last year. There, he became more aware of Springfield residents’ lack of access to fresh healthy food.

“Wanting to be part of the solution, we took our farming backgrounds from growing up in Africa and decided to start Agric Organics,” he explains.

The farm sells its produce through a CSA program, and weekly at the Forest Park Farmers Market and Downtown Springfield Farmers Market. They also provide produce weekly to food pantry locations in Springfield and Chicopee for distribution to elders in the community, and recently started doing pop-up “food as medicine” markets at Baystate Medical clinics in downtown Springfield, a program they hope to grow.

“The health and nutritional benefits you get from eating fresh produce is something we talk about a lot,” says Bello. “We got connected with staff from Baystate Medical at a farmers market, started talking to them, and now once a week we bring our produce to sell directly to two of their locations.” 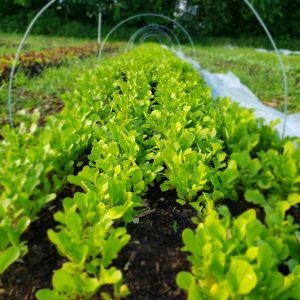 “All of this brings more access to vegetables, and it’s a way to engage customers in these ideas of fresh food and nutrition beyond just a transaction,” Bello says.

Before crops can get to market, however, they have to survive the growing season, which recently has been no small feat. This year, heat has been one of the biggest challenges Bello mentions.

“High heat changes the taste of some crops,” he says, “and a lot are going to seed much sooner.”

Some plants don’t mind heat, like tomatoes and peppers. Others, like many leafy greens, hate it. In either case, the extreme heat has caused many plants to ripen at different times than Bello expected.

“It also takes a toll on our health as farmers, being out there in the heat,” he says. When temperatures spike, they scramble to harvest in short windows when the sun is low.

This year’s drought is causing harsh effects as well, leaves wilting, root vegetables splitting, and moisture retreating far down into the soil.

The challenges of increasingly extreme weather brought on by climate change were something the Bellos considered from the beginning.

“As we design our farm, we always take into account Mother Nature and how unpredictable she can be,” Bello says. “Getting better control of our growing environment is the most important thing, and so we would love to cover everything with high tunnel greenhouses.” They’ve received funding for a few and are looking to install more. 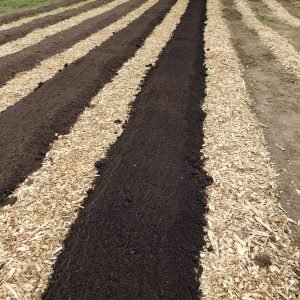 Laying down woodchip mulch between rows has also become a Swiss-army-knife adaptation strategy for them. The mulch’s capacity to absorb and hold water is a boon in both dry years, when it prevents precious moisture from escaping, and in wet ones, when it soaks up excess rain.

“We’ve also gone back to something we learned growing up in Nigeria, which is not weeding as much,” says Bello. “The weeds serve as a shade to the soil and retain moisture around main crops.”

In some ways, small-scale urban farming is a climate adaptation strategy in itself. Agriculture is a leading cause of deforestation and thus greenhouse gas emissions worldwide, and urban farmers make efficient use of already disturbed land, rather than clearing land to plant. In some areas, urban farms also provide oases of greenery, helping to cool neighborhoods during hot summers.

“We are directly embedded in the community where people who eat our food live,” says Bello, “and we can grow a lot in small spaces.”

Getting Agric Organics off the ground has come with plenty of challenges, chief among them the chicken-and-egg conundrum of access to land and financing that many beginning farmers face.

“When you start applying for grants, the first thing they ask for is your farm address,” says Bello. “If you don’t have one yet, that’s it.”

“Looking at farmland in Massachusetts, the price point is … interesting,” he adds diplomatically. “If you already struggle with access to capital, how do you find access to good farming land to start?” 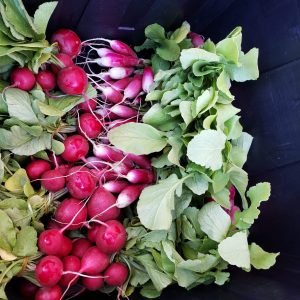 They have received grants for some farm infrastructure that have been very helpful. Several high tunnel greenhouses have been funded by American Farmland Trust, the Massachusetts Food Trust Program, and the Natural Resource Conservation Service (NRCS). They also purchased a walk-behind tractor and other equipment using a Food Security Infrastructure Grant funding from the state of Massachusetts. That program was created to help farmers build resilience in the state’s local food supply following the initial supply shortages of the pandemic.

“We’re always on the lookout for grant opportunities that would allow us to farm better and more efficiently, but we don’t have a very large team,” says Bello. Networking with organizations that support local farmers has helped alert them to such opportunities.

“CISA (Community Involved in Sustaining Agriculture) in particular has been great helping to find grants and support the farm in general,” he says. “If they don’t have an answer to my question, they can always forward me to someone who can.” 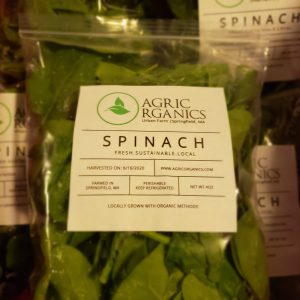 Bello is grateful for these grants. He also notes how the NRCS programs in particular, which reimburse farmers for work already completed, aren’t built for farms like Agric Organics.

“Farmers like myself don’t always have the resources to invest upfront in big projects, and depending on how busy NRCS is, my reimbursement can take more than a year to come through,” he says. “That can be a big hindrance.”

Despite these financial challenges, climate challenges, and the general chaos of farming, Hameed and Ayo Bello have Agric Organics poised to become what they envision as a pillar of the community.

“We want it to be not just a place to buy vegetables, but a place where friends and neighbors can spend their days learning,” Bello says. “We want to educate people not just about agriculture, but the importance of local food, and food as medicine.”

Thinking even bigger about their role at the nexus of food and medicine, “We want to integrate the idea of food as medicine into our local healthcare system,” he continues. “There’s no reason why your physician shouldn’t be able to write you a prescription for weekly vegetables that you come and pick up at Agric Organics, maybe at our own store. We hope to get to that point.”

Jacob Nelson is Communications Coordinator for CISA (Community Involved in Sustaining Agriculture). As a frontline supporter of local food and farms in western Massachusetts, CISA helps farmers get the help and funding they need to thrive, even amid challenges like climate change. Learn more at buylocalfood.org.