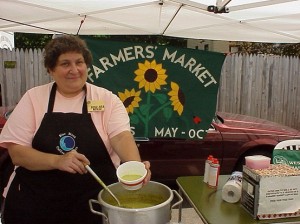 Belle Rita Novak has always loved farmers’ markets. Now a grandmother, she has shopped at farmers’ markets since she was “a very young bride.” Novak’s passion for fresh local food is no doubt key to the success of the Farmers’ Market in Forest Park, a busy urban Springfield neighborhood. As market manager, Novak’s job includes planning and promotion, writing the weekly newsletter, selling tokens to customers, as well as cooking and serving food samples. “It’s a labor of love,” says Novak, and she clearly loves her job.

With the support of friends and help from the Department of Agriculture, Novak organized the market in the fall of 1997 and it opened in June 1998 with five vendors. At the time, there were ninety-eight farmers’ markets in Massachusetts; that number has since doubled to more than 200. Over the years the Tuesday afternoon market has grown and changed: there are now twenty-two vendors, and this year the market is moving from a parking lot into Forest Park. A monthly winter market was added for the first time in 2010, offering fresh dairy, apples, meat, and baked goods.

Fresh produce, great taste, food safety, health benefits, buying local – there are numerous reasons that farmers’ markets have become a fixture in so many communities. Shopping at farmers markets is also a political act, asserts Novak, because you are supporting local agriculture rather than other less desirable ways of using land.

Novak observes that over the years the market has become increasingly important to farmers. Twelve years ago, the time commitment required by the market was a challenge for many family farms. These days, says Novak, selling at market is central to the business plan of the new generation of farmers, and has become integral to many older farms as well.

Access to produce and other food fresh from the farm is especially important in an urban environment, where grocery shopping choices are often limited. Considered the largest urban market in western Massachusetts, the Farmer’s Market at the X attracts a diverse customer base, including many shoppers who pay with their electronic benefit cards. “Farmers’ markets have become popular because the food is so fresh,” says Novak. “People love the vendors and every single week someone thanks me for having the market – it’s so important to them.”