Bob Bergeron’s sugarhouse and home are about an hour’s drive north of Amherst, near the Vermont border. He’s been on the property for over forty years, but he first got involved with sugaring when he was fifteen. “It’s been a long time,” he tells me. He grew up in South Hadley, where his family tapped a few sugar maples, but he really got started when he was seventeen or eighteen, at his grandfather’s sugarhouse in Whatley. “I used to put about three or four hundred buckets out,” Bob said. “It’s something that once you get into it, it’s pretty hard to get away from.” 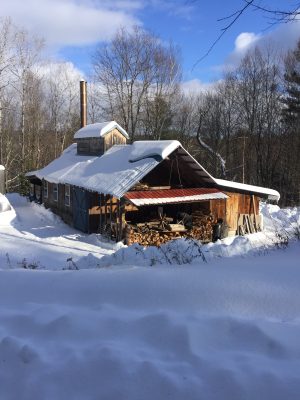 Bob did follow another path for a while—he went to culinary school. Before retiring, just after building his current sugarhouse on this property, he worked as a chef at The Williston Northampton School for twenty-nine years. He is 73 years old, turning 74 in the spring. “That’s gonna catch up with me sooner or later,” he jokes. But for now, he continues to make maple syrup—about 1,200 gallons a year. He maintains 3,300-3,400 taps, connected to his sugarhouse by a network of tubes. “The tubing that we use is treated for ultra-violet light so it doesn’t break down,” he explains. “You can get 20 or 25 years out of it without any trouble, depending on how many squirrels decide to chew on it.” Sugaring is a lot of work—Bob tells me this more than once. “About three-quarters of what you make on it goes back into it.” Bob encourages buyers not to be discouraged by the prices of syrup from local producers. A lot of time, energy, and labor from sugarers, like Bob, go into the little jugs you see on the shelf.

Bob takes a lot of pride in being a small, local producer—especially in Massachusetts. “One thing about Massachusetts syrups is that most of it is sold right here in the state, by individual producers—it’s a local product.” A lot of syrup from large packing houses, Bob tells me, “might be syrup from ten different producers, and it’s all put together—that changes the whole makeup of the syrup.” Different places produce different flavored syrup, depending on the type of trees and the area. Local producers have a lot of competition from large packing houses—companies that don’t produce syrup, just buy it and package it. As a local producer, Bob can keep a close eye on all the syrup he produces. Bob is humble about it—”I think my trees make pretty good-tasting syrup.”

The work of a sugarer is shaped by the climate. “You gotta be ready when it’s time and get all you can out of the trees when they say it is time.” The length of a season varies—it can be as short as four weeks, or as long as six or eight weeks. Over his 50-some years of sugaring, Bob has seen changes in the seasonality of sugaring. “We used to say if you were tapped by Washington’s birthday, you were alright, but the way things are now, you just don’t know anymore.” As temperatures warm, bacteria build up and block the microscopic pores in the trees that the sap flows through. This marks the end of the season. Toward the end of the season, as trees start to bud, the flavor of the sap changes. Bob says you can smell the difference when you boil late-season sap. That sap makes commercial-grade syrup, which is of a lower quality than the syrup Bob makes. Commercial syrup is used for flavorings, extracts, and meatpacking, and is often sold in bulk—different than the table syrup you might put on your pancakes.

Table syrup comes in four grades. Golden syrup is light in color, with a delicate taste. Amber syrup is darker, with a richer taste. Dark syrup has a robust taste, and very dark syrup comes from the end of the season, with a strong flavor. Bob aims for a “happy medium” with the consistency of the syrup he makes. His secret is to make syrup a little bit heavier than the legal minimum, and his customers like it. He says, “if you’re happy with it, then I’m happy that you’re happy with it.” He also makes granulated maple sugar, maple cream, and maple candy.

Bob uses whatever is left over from the season for his own cooking. “I use syrup every day, I put it in my coffee.” He lists a couple other uses: in cereal, yogurt, cottage cheese, even salad dressing. He uses maple sugar for baking. “You can tell the difference,” he says, “if you use that in an apple pie instead of regular granulated sugar, it’s a big difference.” Bob’s daughter recently made a pumpkin pie with maple sugar. It can be used just like regular sugar—if the recipe calls for packed brown sugar, just add two tablespoons more than the recipe calls for,

We end our interview in the sugarhouse, where sap is filtered, evaporated into syrup, and then bottled or made into sugar, cream, or candy. The sugarhouse is beautiful, with trim painted a shade of blue just darker than the December sky. It is built with hemlock and pine cut from the woods on Bob’s property, and it is clear that it was carefully and thoughtfully designed. No sap is boiling now, but I can almost picture the steam rising from the evaporation tank, and the sap turning gold. Silhouetted against the sun is a shed full of wood, lying in wait until the sap starts dripping. As I walk down the driveway to my car, Bob fires up his tractor and ventures into the sugarbush.

You can find Bob’s maple syrup, along with granulated maple sugar, maple cream, and maple candy at Atlas Farm in South Deerfield, Atkins Farms Country Market and Simple Gifts Farm in Amherst, Maple Farm Foods in Hadley, Big E’s Supermarket in Easthampton, and Sapowsky Farms in Granby. It is also available now through mid-March at the Winter Farmer’s Market at the Hampshire Mall in Hadley.