Bringing a little bit of island to the city

Bringing a little bit of island to the city

Since 1992, Nuestras Raices has supported people of Puerto Rican and Latin heritage in growing their own food at La Finca and in 14 community gardens throughout the city. Access to land has allowed many farms to grow and thrive, linking members of the Puerto Rican and Latin diaspora to their cultural heritage, the land below their feet, and each other, through food. Much of this is made possible by the hardworking farmers at La Finca.

During this Hispanic Heritage Month, `some of the farmers shared what farming at Nuestras Raices means for them and the greater community. 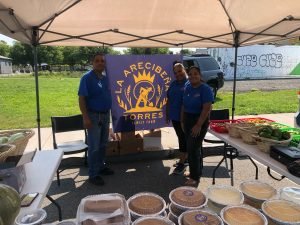 Benito Torres of La Finca Arecibena with his wife Damaris (center) and daughter (left), representing the farm at a local farmers market

Benito Torres, a farmer at La Finca since last summer, grows corn, eggplant, bell peppers, squashes and cilantro for his business La Finca Arecibeña. Torres grew up in Arecibo, Puerto Rico, harvesting from plantain trees and milking cows. Studying to be a professional chef and cooking healthy meals for others inspired Torres to begin farming, and much of what he grows goes into his cooking, including the peppers and cilantro that go into making sofrito (a cooking base popular in Puerto Rico) and pique (a Puerto Rican hot sauce).

At Genaro’s Farm, Jose A. Vazquez grows peppers, cucumbers, pigeon peas, wild oregano and tomatoes, and also makes sofrito and pique. Vazquez’s father was part of the first generation of Puerto Ricans to farm in the Connecticut River Valley in the 1950s, and he soon followed his father north to harvest apples in upstate New York as a day laborer before settling in western Massachusetts.

The man behind Guavate Farm, Luis Aponte, grew up in Cayey, Puerto Rico, learning to farm bananas, plantains and taro root. He has farmed on Nuestras Raices’ land for 15 years, joined for the last seven by Juan Renta of Renta Family Farm, whom he met at a baseball game in Holyoke. The two sell separately but share a large plot of squash, lettuce, cilantro, peppers, cabbage, beans, eggplant and garlic. They also make pique, and preserve and sell their seeds. 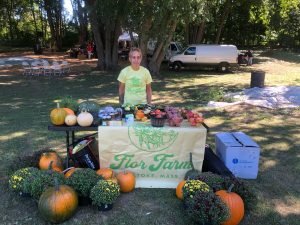 Maria Oliveiras of Flora Farm has farmed at La Finca for the past three years, raising vegetables and flowers. Alongside this, she works as an urban garden designer who helps people create spaces to grow their own food. Oliveiras also supports female victims of domestic abuse in finding financial independence by teaching them to grow and make things themselves.

Miguel Aponte of Aponte Farm also grew up in Cayey, Puerto Rico. One of the founders of Nuestras Raices, he has farmed in Holyoke for over 30 years, and is a respected community reference for growing many traditional crops in the Northeast climate. He also produces vegetable transplants for sale in early spring.

A love of Puerto Rican food and farming traditions informs how these farmers grow and share their food. For example, Vazquez farms the way he learned from his elders in Puerto Rico, with care for the future. “I want to see this land continue in agriculture, even if I’m not here,” he says. “I want us to continue to have a place to grow our food.” 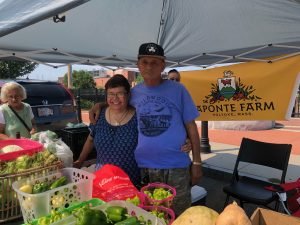 For Torres at Finca Arecibeña, this means farming by natural, organic means. “God gave me the land and the skills. It’s up to me to use them right,” he says. “We need to see soil as a part of our lives, not apart from our lives.”

He feels that, as in Puerto Rico, people in the Valley are disconnected from their food.

They all agree that farming takes hard work and creativity. The cost of running a successful farm is high during a good year, and things like heavy rains (like last year) or drought (this year) present big challenges.

“You have to be ready for what nature will throw at you,” Torres says. “Once you’ve figured one thing out, there is always a new challenge around the corner.”

But the harvest is worth the hardship, because it’s about more than just food. Farming is a way of life, and a way to provide directly for their community. 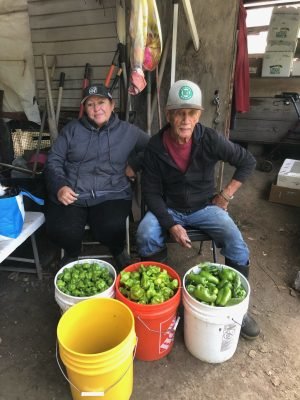 Luis Aponte (right) of Guavate Farm alongside aji dulce and cubanelle sweet peppers he grew. He sits with his wife.

“It’s hard work, no question,” says Luis Aponte. “But the farm is a space I can call my own.” Renta agrees, saying, “This is our place to cultivate food from our island.” The two make a point to preserve the traditional Puerto Rican crops they grow by saving seeds and making them available to others.

Torres shares their appreciation of food as a deep cultural link. “Growing food from my island for people in the diaspora to enjoy — that’s so important to me. We can find our food in stores, sure. But having it be fresh? That’s why I farm.”

Fresh, local food appropriate for Latin American cooking can be hard to find in Massachusetts, and many traditional ingredients are manufactured far away by only a handful of companies. “No one is growing plantains in Holyoke, or at least I don’t see them,” Vasquez says with a laugh.

Many of the farmers say there is a sentiment that local food in New England is both irrelevant to Puerto Rican and Latin cuisine and always expensive. But they are giving their community other options, proving that’s not quite the case. 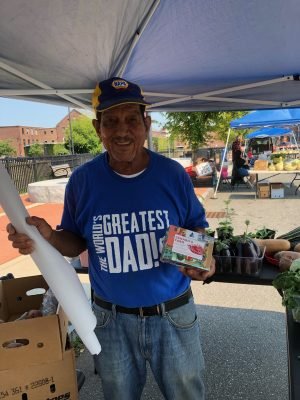 Jose Vasquez, owner of Genaro’s Farm, with some of his merchandise

“The things I can grow here taste just as good as anything grown on the island,” Vasquez says.

“We sell tons of our own pique and sofrito, and it’s better than any of the famous brands,” add Renta and Luis Aponte. “We wish more people knew about it.”

At its heart, Puerto Rican agriculture has always relied on personal connections, Torres points out. “Growing up on the island, people would share meals made with produce from their gardens,” he says. “When people know where their food comes from, it helps build a connection.”

These farmers sell at several different local markets. Finca Arecibeña, Aponte Farm, Genaro’s Farm and Guavate Farmers can be found at the Holyoke Farmers Market, Saturdays from 10:30 a.m. to 3 p.m. at 164 Race St. through Oct. 15. Many will also be at the Holyoke Winter Farmers Market, held from 10 a.m. to 2 p.m. every first and third Saturday from December through March at the Holyoke War Memorial. All of them also sell directly from their farm plots at La Finca, located at 24 Jones Ferry Road in Holyoke.

CISA (Community Involved in Sustaining Agriculture) is a nonprofit dedicated to strengthening farms and engaging the community throughout the Connecticut River Valley to build the local food economy. Learn more at buylocalfood.org.