“Climate change, once considered an issue for a distant future, has moved firmly into the present.” This is the opening statement of the federal government’s new Fourth National Climate Assessment, a sobering analysis of the threats that climate change poses to human society, health and life itself. Farmers have been and will continue to be among the first in our region to face the challenges of a changing climate.

The Assessment draws a clear line between a globally shifting climate and recent weather patterns in Massachusetts. Average annual temperatures in the state have increased nearly 3 degrees over the past century, and this trend will only continue — over the next two decades, the Northeast is predicted to experience the most significant warming in the contiguous United States.

Shifts in the maple syrup production season, which happens just as winter gives way to spring, reflect this warming pattern. Bill Coli of Blue Heron Farm says, “When we first moved to Charlemont in 1975, we met an older farmer on the next hillside — his family had been sugaring forever. He grew up in the early 20th century and remembered when sugaring season was in April. Over his lifetime, it became March. Now, we’re sugaring in February.” 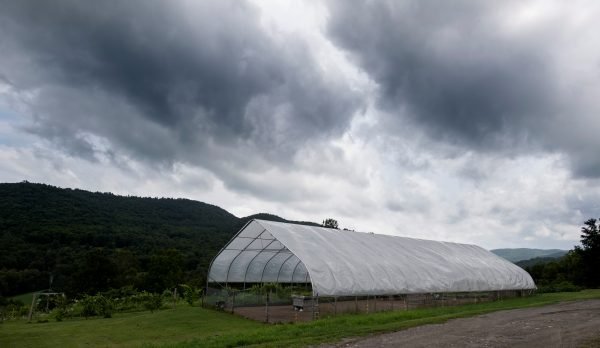 Warming might sound like good news for fruit and vegetable producers, and indeed, farmers may enjoy a longer growing season in the next couple of decades. But none of these changes stand alone, and the warming will be accompanied by unstable weather patterns, catastrophic weather events and damaging swings in temperature. Many plant diseases, weeds and agricultural pests that died off annually in our cold climate will survive warmer winters.

In Massachusetts, we’ve already seen an increase in the amount and pattern of precipitation: The past 10 years have been 13 percent wetter than the long-term average, and the number of extreme precipitation events (days with more than two inches) is up 30 percent.

To understand what a wetter climate will mean for local farmers, we need only look to this past summer, when abnormal rainfalls and heat took their toll. For many vegetable producers, the ceaseless rain rotted crops, increased disease and pest pressure and made it impossible to work in the fields. Hay production was down because hay must be harvested dry so that it doesn’t mold or combust in storage. Longer-term impacts of heavy rainfall include soil erosion and compaction and problems with agricultural runoff.

Because of this year’s unprecedented rainfall, CISA opened its Emergency Farm Fund in October. So far this year, the fund has distributed $55,000 in no-interest, quick-turnaround loans to six farms.

Unpredictable, severe temperature shifts during seasonal transitions is another climate change impact that will continue to accelerate. Warm temperatures in the spring can hasten the development of fruit buds, leading to damage and crop loss if followed by a cold spell. This decimated the peach crop throughout the Northeast in 2016. Similarly, unseasonable cold temperatures early in the fall can damage trees and reduce harvests the following season.

Farmers in our region are accustomed to managing highly variable weather, and many farms have been carefully structured to absorb the immense risk inherent to weather-dependent businesses. What we face now is much more than the usual vagaries of weather, and decades of experience, hard work, and resilience may not be enough to carry our local farms and food system through these extreme changes.

As a society, we have a couple of choices here. One response, which local farmers have already begun, is adaptation. Learning and paying for new systems can be costly, however, and we can help by fully funding programs that support farmers in making these changes.

The second is mitigation, and our actions in the next few years will be decisive on this front. We should all be urging our political representatives, municipal governments and corporations to aggressively prioritize strategies to limit and slow climate change.

The Fourth National Climate Assessment is a valuable tool for understanding how climate change will manifest in the communities that we call home, and how it will shape our local food system. Our window for controlling how much the world warms — how much change we need to adapt to — is right now. It’s not too late, but it is now or never.