The Daily Hampshire Gazette, May 29, 2017, by Claire Morenon 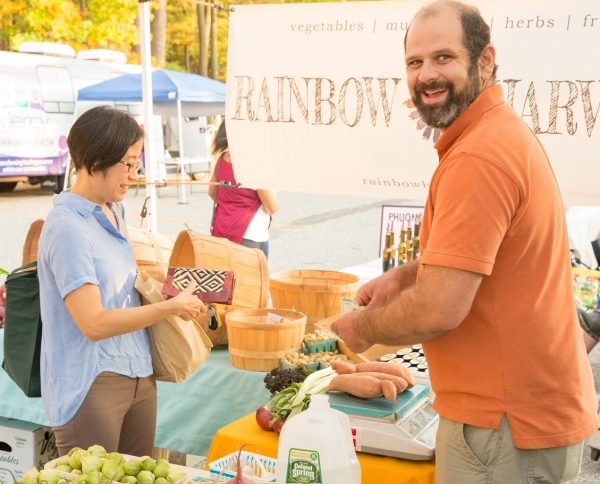 It’s really and truly spring! Asparagus is pushing up, orchards have bloomed, pastures are lush, and farmers’ markets are opening for the season all around the Valley.

The longest-running farmers’ markets in the Valley have been in operation for more than 40 years, and in that time, farmers’ markets have become one of the most visible elements of our vibrant local food system. And for good reason — successful farmers’ markets bring real benefits to the communities that host them and to their farmer vendors.

The last 15 years have shown an interesting trajectory for markets in our region. CISA’s own tracking dates back to 2002, when there were a total of 10 farmers’ markets in Franklin, Hampden and Hampshire counties. The count more than doubled to 21 markets in 2007, and then the growth really exploded, peaking at 49 markets in 2012. That expansion proved to be unsustainable, and after a quick drop-off the following year, the number of markets has hovered close to the 36 we’re counting in 2017.

Farmers’ markets provide vital income streams for local farms. As of the last federal agricultural census in 2012, Massachusetts farmers sold products valued at $47.9 million directly to consumers, all from their farm stands, through farm shares, or at farmers’ markets.

These direct relationships between farmers and consumers are a cornerstone of our agricultural economy, and farmers’ markets bring those relationships into the cities and towns of the commonwealth.

Farmers’ markets also create public spaces, and the feeling of neighborliness and community connection they engender is central to their appeal. If you’re a regular market shopper, you already know this — a lot of the fun of the market is in seeing friends and neighbors, chatting with vendors, picnicking, and enjoying the day. In recent years, many local markets have put more energy into organizing special events and live music, too.

Markets aren’t just social activities, though — they’re also important sources of food and resources for their communities. Springfield’s City Soul Farmers’ Market, for example, was created by local residents to make fresh produce available in the city’s Mason Square neighborhood, which has been without a full-line grocery store for years. It also functions as a “seasonal community hub,” as market manager Liz Wills-O’Gilvie puts it, where people can access basic health services like blood-pressure screenings, as well as other information and resources.

Over the last 10 years, the number of farmers’ markets that have the equipment needed to process SNAP (formerly food stamp) transactions has grown enormously. This increase is the result of hard work from anti-hunger and farm advocates, and dedicated support from the federal and state agencies that administer SNAP. In 2007, only nine markets in the whole state accepted SNAP, and direct farm-to-consumer SNAP sales totaled just over $4,543 that year. By 2016, SNAP sales had climbed to $470,505 at 153 markets and other direct-from-the-farm sales outlets.

This growth is poised to continue with the rollout of the Massachusetts Department of Transitional Assistance’s statewide Healthy Incentives Program, which will offer an instant rebate on purchases of fruits and vegetables made at farmers markets, mobile markets, farm stands, or through CSA farm shares. Hunger and diet-based disease are present in every community in the Valley, and markets can play a vital role in addressing both.

The most successful farmers’ markets are able to balance all these roles in harmony, functioning as a vital vector of commerce for local farm businesses, as a community destination and public meeting space, and as a resource to all members of the communities they serve. And because most farmers’ markets are run by volunteers or paid managers with very slim budgets, that can be a tall order! It takes time, energy, and support to build and sustain a market, and it all depends on shoppers coming to support the vendors and the market itself.

So, if you’re a regular market shopper, keep it up! If you only make it a couple of times a year, consider adding a few additional visits this summer. And if you’ve never stopped by your nearest market, give it a shot!

Claire Morenon is the communications manager at Community Involved in Sustaining Agriculture of South Deerfield.