Columnist Claire Morenon: Food as a joy, not a source of guilt 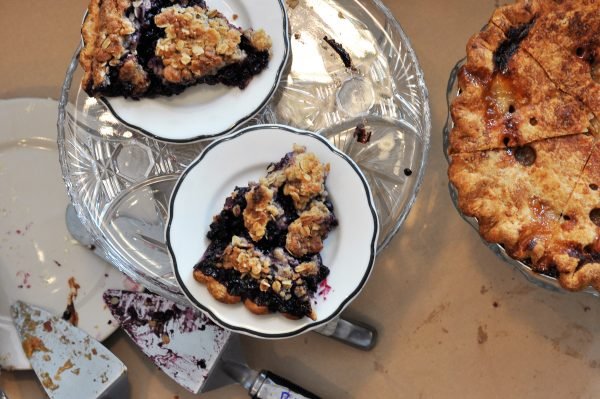 Last week, friends and families all over the nation sat down together over full tables to celebrate and give thanks.

Over the next two months, many of us will continue to celebrate over special meals marking the winter solstice, Hanukkah, Christmas, Kwanza and the new year.

The winter holidays are potent examples of the emotional and cultural weight that our meals can carry. The modern Thanksgiving meal centers on foods that are representative of the Massachusetts harvest, and in that way links us to the harvest festivals that have been celebrated throughout history by people all over the world.

Throughout the coming weeks, many of us will be sharing foods that tie us to our histories, that are uniquely linked to this season, and that connect us to each other.

Alongside all this warmth and fullness is the steady drumbeat of another feeling that often accompanies food and eating: guilt. Even before the Thanksgiving meal is on the table, people everywhere are lamenting its caloric load. Every office party and family gathering over the next month will echo with “I really shouldn’t,” and “I’ve been bad,” as people indulge in seasonal treats.

We do live in an era of unprecedented diet-related illness in the United States. Cases of Type 2 diabetes, heart disease, stroke, and certain cancers are on the rise. There are countless factors at play here, but one of the major contributors is a structural shift in food production and availability that has made heavily processed foods less expensive and more widely available than fresh produce and basic foodstuffs.

This shift has disproportionately affected the foods available to low-income people, and is reflected in disproportionately poor health in low-income communities. And hunger continues to plague our community. According to the Food Bank of Western Massachusetts, one-quarter of the people in the four counties of western Massachusetts struggle with food insecurity and are faced with extremely limited food options.

We’ve recently seen the conventional wisdom about diet and health shift in front of our eyes as formerly demonized foods have been redeemed (like certain fats) and formerly “good” foods have fallen from grace (like pasta and grains). It has become increasingly clear that much of the mainstream dietary advice of the last 50 years has been heavily influenced by lobbying from commodity food producers, such as the sugar industry’s recently revealed funding of studies that demonized fats.

We can’t ignore the seriousness of diet-related disease, or the impact that dietary choices have on health. But this national health crisis is the result of many more intractable forces than Grandma’s pie, and it is not going to be solved with servings of shame alongside our holiday meals.

I think about guilt and food a lot in my role at Community Involved in Sustaining Agriculture, where we are working to build a stronger local food system by connecting farmers and our larger community. Local, community-based food systems, in addition to our health, have been threatened by global and national shifts in food production and by monied interests skewing the conversation around food. We, and countless other organizations and activists, are working to build and sustain alternatives to a food system dominated by a few large corporations that doesn’t value the health of the land, farmers, or eaters.

This shift requires more of us to start seeking out local food, either by shopping directly with local farms or by asking for local food at our regular grocery store or our favorite restaurants. Here in the Valley, we’ve seen how much of a difference this can make to local farms and food businesses in our region’s thriving local farmers’ markets and farm stands and the increasing amount of local food in grocery stores and on restaurant tables.

This is what we envision: a local food system that is built on joy and the pleasures that local food brings — the first sweet strawberry in the spring, juicy tomatoes in late summer, warming stews and roasts during the coldest months, maple sap flowing with the first spring thaw.

We must work toward healthy, local food becoming available to everyone in our community, and fair prices that can sustain farmers and farm workers. And central to it all are family and community gatherings over shared meals that connect us to farmers and the land.

By acting on our values, choosing local food when we can, and giving ourselves space for indulgence, imperfection, and gratitude, we can make this possible.