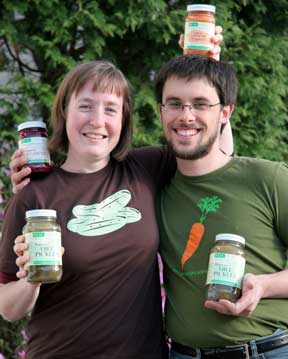 How does a 24-year old from northern New Jersey get into the business of making pickles? For Dan Rosenberg, it started with his interests in social change, ecology, and the food system, and his experience as a recent college graduate apprenticing on an organic farm. A workshop at a farming conference inspired Rosenberg to try lactic acid fermentation, which is considered the original pickling method. The process relies on beneficial cultures, like those in yogurt, to break down natural sugars in vegetables and produce lactic acid and other nourishing substances.

Rosenberg’s business, Real Pickles, was launched in 2001. “It was another way to put up local food so that the harvest could be enjoyed during the winter, and to make available a traditional food that has kept people healthy for thousands of years,” says Rosenberg.

The company’s products, including dill pickles, sauerkraut, and kimchi, have quickly gained a loyal customer base throughout the region. Last year, Real Pickles purchased and renovated a century-old industrial building in Greenfield to accommodate its growing success. Many energy-efficient features were incorporated into the new facility, and more are planned this year. The facility was also designed to accommodate the unusual needs of a business that sources ingredients only during the local growing season, then stores its fermented product for sale throughout the year.

Rosenberg credits his business success to staying true to his principles: investing in the local food system, promoting minimally-processed healthy foods, and being as ecologically conscious as possible. Some of his principles led to business constraints that made early financers wary: for example, his commitment to regional sales and his seasonal needs for labor. Rosenberg is proud, however, that Real Pickles has proven to be economically viable, while finding and filling a niche in the local food structure.

Real Pickles uses only organic vegetables, which it purchases from seven farms within fifty miles of Greenfield. Its products are available at farm stands and CSAs as well as food stores throughout the Northeast. In addition, the company ships to mail order customers – but only if they live in New England, New York, New Jersey, or Pennsylvania!