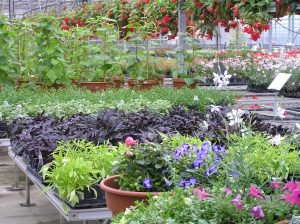 Marc Laflamme gestures toward the scenic spread of rolling pick-your-own berry, peach and apple fields at Dickinson Farm in Granby, where neighbors have been enjoying the fruits of his family’s labor for decades. “The same people keep coming,” says Marc. “Parents brought their kids forty years ago, and then those kids grew up and brought their kids. People who have come and seen the quality of the stuff – it means everything.”

Marc Laflamme manages Dickinson Farm alongside his two brothers Michael and Bruce. Their father started the farm in the 1930’s, and Marc and his brothers took part in the farm work from the time they were young boys. “We all as a family pitched in,” says Marc. “That’s just the way we were brought up.” Together, the Laflamme family now grows over two hundred acres of fruits and vegetables and runs one of the largest farm stands in the Valley. The three brothers all work full-time at the farm, and their father still works daily in the farm’s extensive greenhouses.

“We’re a tight knit family,” says Marc. And a hard-working one, it is clear. “We’re strictly farmers – we have no side money. Everything has to be related to how hard you work the farm.” The brothers have had to diversify the farm in order to sustain all three of them and their families. They grow a wide range of vegetables and fruit for the stand, and their greenhouses display an array of hanging baskets, vegetable and bedding plants, roses and other potted plants. They also produce a variety of baked goods, fall decorations and Christmas trees and wreaths.

The Laflammes sell some of their crop wholesale, but for the bulk of their income rely on the farm stand. The loyalty of their farm stand customer base is steady, says Marc, and less apt to change than wholesale markets. Marc believes strongly in the benefits of selling the farm’s own products direct to customers, which he feels contributes significantly to Dickinson Farm’s economic sustainability. “The right thing is to sell your own stuff,” he says. “That’s the only way you can do it.”

Though the farm stand has remained at the cornerstone of their business for eighty-odd years, the Laflammes have had to make changes over the years to reflect the changing markets. While community members used to buy the majority of their food at local farm stands, many now shop mainly at larger chain stores, and their diet depends less on local farm products. “Demand for things is different now than forty years ago,” says Marc. “Everybody used to buy a fifty pound bag of potatoes – now they buy ten pound bags. You’ve got to remember there weren’t supermarkets back then, and there were more family-oriented people coming to the stand.”

There have been other changes over the years that have presented challenges. Marc has seen fuel, fertilizer and health insurance costs snowball over the decades, while the price of food has not risen at the same pace. He also believes that increasingly stringent government regulations have put some local farms out of business. “Everybody in this business,” he says, “I don’t care what size – it’s a struggle.”

The Laflamme family is used to confronting such challenges head on. “I’ve never met a family that worked harder,” says Kathleen O’Conner, who has worked at the Dickinson Farm stand for fifteen years. “There isn’t anything they ask anyone to do that they’re not doing a hundred times over themselves.” Marc describes his parents as having worked double jobs when he was a child. “We never really counted our hours – it was just morning till night. It was impregnated into us from our parents – we saw how hard they worked and it was just normal to us.”

Long as the hours are, farming is a way of life that Marc clearly values.  “I was born in it and brought up in it,” he says, “and I can honestly say I like it – I love it.”  It is this love, clearly, that has built the farm into what it is today – enabling the Laflammes to gradually expand the farm and provide sustainable livelihoods for the whole family. “I think it’s just something that’s inside of you. You appreciate nature and the growth of things and the opportunity to own your own land and work it. It makes a person who likes it never want to leave it.”