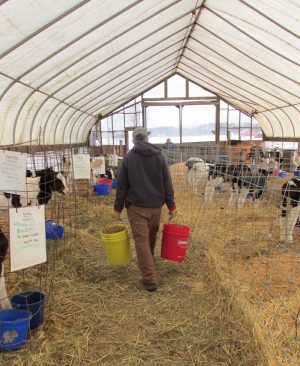 Devine Farm in Hadley is, in many ways, a typical Massachusetts dairy farm. Brothers Stephen and Robert Devine, with their cousin Bill Dion and longtime employee Brian Harris, are 4th-generation dairymen who milk 160 cows and sell the milk to Garelick Farms in Franklin, MA, a regional processing plant that combines their milk with that of other farms. So while you might see their cows and big barns as you travel down Knightly Road in Hadley, you won’t see Devine Farm’s milk labelled as such in a grocery store cooler. But with 160 cows each producing, on average, 70 pounds of milk per day, Devine Farm is making a significant contribution to food production in the Pioneer Valley.

Like many dairy farms in the state, Devine Farm is diversified: on about 300 acres, the Devines grow hay and corn for feed, winter squash, and run a small greenhouse business. Their newest offering is composted manure, which is available to gardeners by the bucket or truckload. While it’s been a dairy farm since its inception, the Devines also used to raise tobacco, a crop that was dominant in the central Pioneer Valley until relatively recently, as shifting economics have made it less viable. They also grew cucumbers that were sold wholesale to the Oxford pickle factory in Deerfield, which closed its doors in 2006. The Devines started growing winter squash in place of those crops, and focusing more on the care of their cows. Says Stephen Devine, “When times change, we have to change. We’re able to do a better job as a dairy since we stopped doing tobacco.” When the farm was focusing more on field crops, they had up to thirty employees at a time. Today, it’s a true family operation, with aunts, uncles, cousins, wives, and partners all pitching in and offering support. Stephen and Robert’s Aunt Mary manages the greenhouse operation, which is the only direct sales component of their business and which has expanded from one greenhouse to five since the family started it in the 1980s.

And like most Massachusetts farms, Devine Farm has unique and important connections to the broader community. Through a partnership with the Department of Veterinary and Animal Sciences at UMass Amherst that was set up by Bob Duby, a retired UMass professor who still works regularly on the farm, Devine Farm functions as a hands-on learning laboratory for undergraduate students. During each semester since 2013, Professor Mark Huyler’s students have been coming to the farm twice a day, seven days a week, to feed the calves, keep their housing clean, and participate in their medical care. Students are scheduled in two-week shifts, which gives them time to follow through on the care of a particular animal.

Huyler says that most of the students in his department are interested in veterinary school, and this sort of hands-on experience gives them an edge as graduates and, perhaps more importantly, gives them a real sense of what it takes to care for animals full-time. The benefit to the farm is clear, as the help from the students frees the farmers up to focus on their other work. To see a truly sweet video of UMass students caring for calves and talking about their experiences on Devine farm, visit the UMass online news office.