This article is one of four written by CISA for publication in the Daily Hampshire Gazette’s “Climate Change at Home” series, reporting on the current impacts of climate change to daily life in western Massachusetts. CISA contributed the perspective of climate change’s impacts to local farmers and our food supply.

“What would happen if farmers adapted to climate change without relying so much on plastic and petroleum?” asks Abby Ferla. “One of our answers is, we’d probably grow different plants.”

Ferla is the force behind Foxtrot Farm in Shelburne Falls, which grows what she terms “organic herbs and climate-resilient, high-nutrient foods,” now on almost 8 acres of Hilltown land. She founded Foxtrot in 2017 after farming elsewhere in western Massachusetts and across the country. Herbalism, culinary arts, teaching, and climate activism are also folded into her background. 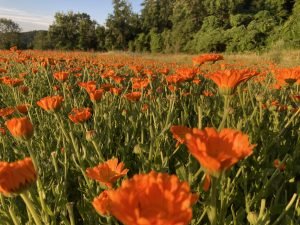 “We sell locally through our CSA and to the Hilltown Mobile Farmers’ Market and have a good following of herbalists and apothecaries nationwide who buy our dried herbs in bulk,” she says. Two seasonal farmhands and her partner also contribute to the work.

Foxtrot Farm was designed for a changing climate from the beginning. “When I started the farm, I knew already what the climate projections were for this region,” Ferla explains. “Managing water was already heavy on my mind.”

As our atmosphere has warmed, the Northeast has gotten more yearly precipitation on average, but the bigger story is when and how it falls. More severe storms are dumping rain and snow faster over shorter periods of time and with much less consistency, as documented by the UDSA’s Climate Hubs. That phenomenon is projected to intensify.

Farmers are facing longer and more intense droughts and flooding, and a greater risk of soil erosion and crop damage. The result? Stressed out plants, animals, and farmers alike. Recent weather patterns in our region bear out these models: last year, we saw prolonged rains through much of the growing season, while this year was marked by drought. 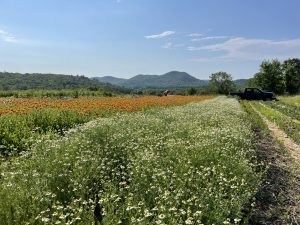 At Foxtrot Farm, Ferla is using several adaptation techniques. Their planting beds follow the contours of their sloping fields, slowing and collecting water while preventing erosion. They also don’t till or disturb the soil structure, which increases aeration and its capacity to absorb water.

“It’s great to have some space where we can control how much water reaches the crops,” Ferla says. “It’s also helped extend our season and let us grow some crops that otherwise wouldn’t survive here, like lavender, passionflower, turmeric, and ginger.”

Initially Foxtrot Farm grew mostly certified organic herbs, meeting a market need for quality US products over imports. That’s still a pillar of their business, but about four years ago Ferla decided to grow more produce as well. She was met with a dilemma.

“I started thinking about how many adaptation strategies organic farmers use that rely on petroleum,” she says. “Our dripline irrigation, the tarps we use to block weeds for no-till, the skin of high tunnel greenhouses – it’s all petroleum-based plastic. I think plastic is a great tool, but I started thinking, ‘is that our only tool?’”

In the end, they settled on growing what they consider climate resilient plants that thrive in variable conditions without so much plastic protection. These run the gamut from herbs to annual fruits and veggies to perennial crops like their young elderberry bushes.

Some of these plants would be familiar to home cooks across the US, including many culinary herbs like parsley, oregano, and thyme. Others are less common but becoming more recognizable as more farmers, chefs, and eaters grow and enjoy them.

“I’m really into tomatillos and husk cherries after these past two years,” says Ferla. “Last year our summer rainfall was twice the average, this year it’s been so dry, and they’ve done well each year.” 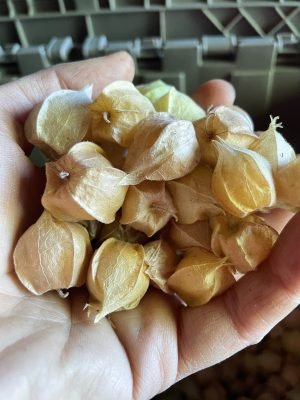 A handful of husk cherries

Both plants, characterized by a papery husk around their fruit, belong to the nightshade family alongside tomatoes. Tomatillos are larger, more tart, and often roasted or used in salsas. Husk (or “ground”) cherries are smaller, sweeter, and often enjoyed raw.

Many dark leafy greens also fit the bill, like nettle, burdock, and dandelion greens. These tend to be new foods for most eaters, but pack a nutritional punch much stronger than their traditionally farmed cousins. They can also be quite bitter, a signal to consume them in moderation or as part of a dish.

“Don’t try to make a salad with just dandelion greens,” Ferla advises. “I recommend a pesto with garlic and parmesan cheese. Or do what the Italians do and cook it with a lot of fat. That makes sense because dandelions’ nutrients need fat to be absorbed, while their bitter compounds help you digest fat.”

“There’s a pretty cool overlap between which plants are really resilient to grow and what’s really nourishing,” she adds.

Talking about these plants’ culinary uses comes easily to Ferla. That’s a helpful skill, because the real bottleneck to farming more of these crops isn’t farming them, it’s how comfortable people are eating them. Foxtrot Farm’s CSA introduces members very intentionally to these foods, providing cultural context for their use and teaching skills for cooking with them.

“I provide a lot of historical background to how these plants were eaten and how that might work in a modern cuisine,” Ferla explains. “It’s been cool to watch people really take to new foods.” 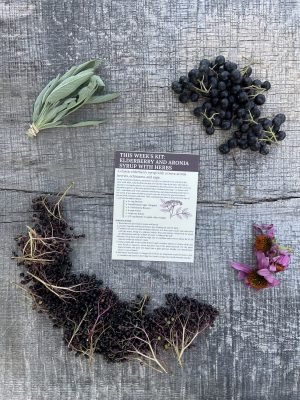 Each distribution also includes a kit with all the ingredients and instructions to make one dish or apothecary item, which members can attempt on their own and compare notes.

In a couple of years, Foxtrot will be introducing customers to elderberries, thanks to a newly planted 3.5-acre elderberry orchard, which they hope will produce food for decades in a field too damp for herbs and veggies.

“The challenge of growing perennials is that they require more time and labor to establish, and they take longer to start producing,” Ferla says. Yet these elderberries represent a valuable investment in the future of their farm, and public benefits like increased land and soil health and local food supply.

To help finance that investment, they applied for a grant from the Massachusetts Department of Agriculture’s Climate Smart Agriculture Program with the support of CISA (Community Involved in Sustaining Agriculture) and other consultants. “It was so helpful to sit with people who could run the numbers with us and create an enterprise plan that was compelling to the state,” she says.

Ferla isn’t sure how they’ll market the elderberries once they start producing. Perhaps they’ll freeze the berries, or juice them to make a syrup or mead. They could also harvest the elderflowers instead, which are often used medicinally or to flavor cordials and liqueurs, like Saint Germain.

Processing and marketing represent another bottleneck for farmers selling a new product. Here, Ferla sees sharing of equipment and branding as one path forward. 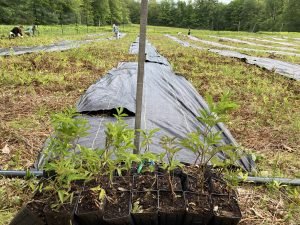 Elderberry saplings waiting to be planted

“Then if one farm has a down year, the others can pick up the slack,” she explains. “Elderberry has the potential to be a cash crop. I know three other local growers and more who say they’d grow some if we figure out a market.”

“Big picture,” she continues, “for farmers to adapt together as a community we need more collaboration than we have currently. It takes time to build relationships and trust before that emerges, and farmers are busy, but organizations like CISA are in a good position to foster dialogue.”

Ultimately, Ferla’s vision is both radical and shockingly simple.

“It’s not about ‘eat these 5 plants to solve the climate crisis,’” she offers. “It’s about reorienting towards eating what makes sense here, in this place, in this time. I think if we ate a little more amaranth and dandelion and a little less lettuce, we’d be healthier, and it would be a lot easier on farmers and our land and water supply.”

It might seem daunting. But as Ferla reminds us, “this experiment – growing and eating plants that are new to us – can also be playful. It’s fun. It’s certainly delicious.”

Jacob Nelson is Communications Coordinator for CISA. As a frontline supporter of local food and farms in western Massachusetts, CISA helps farmers get the help and funding they need to thrive. Learn more at buylocalfood.org.