By Kristen Wilmer, Program Assistant
Published in CISA’s May 2013 Enewsletter 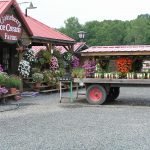 Arriving at Gooseberry Farms can come as a surprise.  The farm is a distance from the main roads, and the farm stand and fields stand out in the midst of the urban/suburban neighborhood that surrounds them in West Springfield.  The farm stand has been here for twenty years – now one of only a couple remaining in the city – but these fields have been worked for much longer.  The Lapinski family has been farming here for four generations now, during which time the local landscape has undergone dramatic change.

Leonard and Nancy Lapinski run the farm now, and the whole family is involved.  The Lapinskis’ daughter Christine works in the farm store, where her one and a half year old daughter also can be seen “helping” with the stand.  The Lapinskis’ sons also do a great deal of work on the farm, and are in the process of opening their own farm stand in a more well-trafficked location down the road.

Because the farm stand is on a back road without much through traffic, most customers don’t just drive by the stand en route to other places: they have to know about the farm to come here.  Once you’re at the farm, though, you can’t miss it. The area in front of the farm store and greenhouses overflows with an eye-catching array of vegetables, flowering plants and vegetable starts.  Several rocking chairs sit on the porch, inviting customers to stay for a while and socialize.  “When people come down here they come down here for a reason – because they want to come here,” says Leonard.  “They enjoy just sitting down here and talking to each other.  There’s politics going on here on the porch all the time.”

“This didn’t come overnight – this took twenty years,” says Leonard, gesturing toward the abundant farm store displays.  In this out of the way location, it’s taken hard work and time to build up the farm’s current loyal following of customers.  The farm stand started when one of Leonard’s sons, who was young at the time, decided to put a table out at the end of the driveway with vegetables.  “To put a long story short,” says Leonard, “the kid made $17 on the first day,” and the seed of an idea was planted.  The first dollar of that seventeen is now framed and hanging on the wall of the farm store.

Gooseberry Farms’ customer base has grown steadily over the years.  The friendly atmosphere attracts people – the Lapinskis obviously enjoy talking with their customers.  “We like the people here,” says Leonard.  “If you want to be in this business, you’ve got to have a good attitude toward customers.”  Leonard is outgoing and enjoys joking with and teasing customers, and engaging them in conversation: “I can tell you stories from here to kingdom come!  If customers like what you have to offer, they will come to you,” says Leonard.  “I don’t care where you are.  If you’re in Timbuktu, they will find you, and that’s what it’s about.”

The Lapinskis believe that the key to attracting customers is providing a high quality product.  They choose seed carefully for their vegetable starts so customers will have the varieties they think will do best.  “The bottom line of the whole thing is give people something decent, says Leonard.  “You’ve got to give people quality stuff and you’ve got to talk to them.”  Their customers agree: Leonard asked one customer what she thought of their farm and she declared herself with enthusiasm: “A satisfied customer forever!”  The farm has customers who come to the stand to buy sweet corn so they can bring it across the country with them to show off to relatives.  One family even contacted the Lapinskis after moving to Florida, asking them to ship a case of tomatoes because they missed them so much.

Before the farm stand was built, Gooseberry Farms was a wholesale operation.  When Leonard’s grandfather owned the farm, celery was one of the main wholesale crops.  As a young child Leonard’s job was to stuff the celery in long narrow bags, because he was the only one in the family with hands small enough for the job.  For years after Leonard and Nancy took over the farm, they specialized in radishes for wholesale.  It was hard work, but they were good at it.  “My wife could go out there at five in the morning and bunch radishes like there was no tomorrow,” says Leonard. Radishes paid the bills, including funding their childrens’ college education.  “Radishes and Nancy are what did it,” says Leonard.  “I have to give her a lot of credit.”

“Earlier you concentrated on one thing and did it well,” says Leonard, “but times changed and you diversified.”  Times truly have changed.  Back in “the day,” Leonard remembers there being fourteen or fifteen farms on what is now a highly commercial stretch of Riverdale Road (Route 5).  “I remember that as all farmland, says Leonard. “The only thing that was down there was the old Riverdale drive-in theater.”

The Avocado Street market in West Springfield, which started as a growers’ marketing cooperative in the 1930’s, is another indication of the changing times.  When the market was in its heyday, a farm could sell 300 bushels of spinach by 6am – now a farm might sell a couple bushels in a day.  There used to be about 30 farmers at the market, along with fifteen wholesalers and meat cutters.  “As a kid I would go in to the market at 2 in the morning,” remembers Leonard, “and when we’d get there buyers would chase the truck.”  At that time stores were only open six days per week; now the city has big supermarkets which are open seven days a week.  Leonard sees this as part of what spurred along the larger shift away from community-run farms and businesses.  “The minute supermarkets opened seven days a week it was a different ball game,” says Leonard.  “Everybody got weeded out.”

As the one remaining farm in the neighborhood, with houses on all sides, one might expect the farm to have occasional conflicts with neighbors.  In reality, though, the farm elicits routine complements instead of complaints, and many neighbors see it as a valuable asset to the community.  As one neighbor put it, “It’s such a good thing to support the community business.  We come down here to walk all the time.  Leonard’s up with the sun and down with the sun – he’s really working with the land.  It’s beautiful.  It’s the country in the city.”

Though some of Gooseberry Farms’ land has given way to development, the Lapinskis still farm 35 acres and there are no signs that they will be stopping any time soon.  The future of the farm, in fact, looks bright.  “Everything’s just falling into place,” says Leonard, of his sons’ transition into farm ownership, their hard-won loyal customer base, and the growing success of the farm enterprises.   “The bones are sore, the knees are sore, but we enjoy what we’re doing,” says Leonard.  “We’ve worked too damn hard for it.  I couldn’t give it up for nothing.”