Conserving ecologically important wildlands, economically and culturally important working lands, and the scenic beauty and culture of rural towns in western Massachusetts has been the focus of Hilltown Land Trust (HLT) since its founding in 1986. During its first 24 years as an all-volunteer organization, HLT protected almost 3,000 acres of working farmland and forest as well as other areas of ecological importance in Hampshire and Hampden Counties.

When HLT affiliated with The Trustees of Reservations in 2010, it maintained its independent identity but gained the backing of the much larger and older statewide organization. HLT and The Trustees, both of which rely on support from local members, donors, and volunteers, pooled their resources to hire staff and increase their conservation work in the hilltowns.

Agricultural preservation in the hilltowns differs from the efforts to preserve prime farmland in the Valley. HLT’s priority is to preserve working lands that may by used to grow crops or raise livestock, but are just as likely to be wooded areas that are managed for forestry purposes or for maple syrup production. Because of the lack of prime soil in the hilltowns, it is more difficult for land there to qualify for the state’s Agricultural Preservation Restriction program; most protected land in these communities has been conserved using a Conservation Restriction (CR). 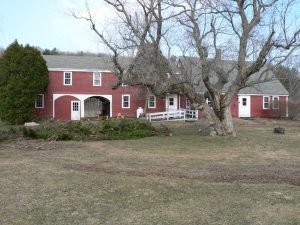 Warner Farm in Cummington, conserved in 2010 with the assistance of Hilltown Land Trust (HLT photo)

The protection of Cummington’s Warner farm in 2010 was HLT’s most ambitious effort to date, providing wildlife protection and cold water stream conservation to 119 of the farm’s 131 acres. Directly opposite the Cummington Fairgrounds, the farm sits at the east end of Porter Hill Road. Captain Joseph Warner built the farmhouse in 1779 and the Warner family farmed there until 1965, when they donated the land to the United Church of Christ to use as a retreat.

When the current owners, Richard Fournier and his daughter, Sarah Fournier-Scanlon, purchased the property in 2009, they wanted to continue using the land for both agriculture and reflection. Rich, formerly pastor to both of Cummington’s Congregational churches, saw the potential for an educational and spiritual retreat center; Sarah, inspired by the famous Findhorn community in Scotland, wanted to create a sustainable farm. 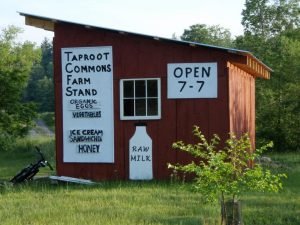 With HLT’s help, Rich and Sarah are both realizing their dreams. Local Hero member Taproot Commons Farm has built a state-inspected small-scale dairy, and now sells its own raw milk and free-range eggs, as well as local honey. The farm offers its facilities to groups seeking a rural space for gatherings such as strategy sessions, spiritual retreats, or weddings, with the caveat that the grounds are shared by “perpetually noisy ducks!” In addition, the public is welcome to enjoy bird-watching in the wetlands, or hike to a beautiful waterfall at the southern end of the property.

From HLT’s perspective, the Warner project is a good example of integrating wildlife protection with agricultural and historic preservation. The farm includes extensive wetlands that support rare or endangered wildlife and plants, and have been designated “Priority Habitat” by the Massachusetts Natural Heritage and Endangered Species Program. 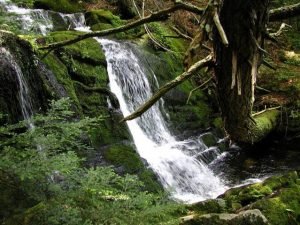