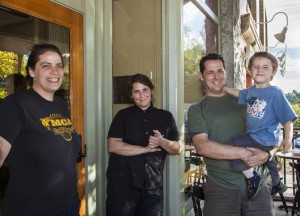 The blackboard that greets customers upon arrival at Hope & Olive in Greenfield could almost be used as a guide to Franklin County farms and food businesses that use local ingredients. During the winter months, the list includes about 25 local farms and other suppliers; in summer it is much longer. This public statement of the local sources of Hope & Olive’s ingredients is no coincidence, for local food is at the very heart of this restaurant owned and operated by siblings Maggie and Jim Zaccara and their friend and partner Evelyn Wulfkuhle. They also jointly operate Magpie Woodfired Pizzeria around the corner.

Maggie and Jim attribute their success as restaurateurs to their enthusiastic dedication to local sourcing as well as the “infinite knowledge” imparted by their parents, who owned and ran several eating establishments. Forty years ago, when Maggie was five and Jim two, their parents opened Chuck’s Steakhouse in Danbury, Connecticut. As soon as they were old enough, each of the ten Zaccara children were employed in the family business. Maggie and Jim first teamed up with Evelyn, whose background was in bread baking, at A Bottle of Bread, a small restaurant they opened in Shelburne that gained a reputation for excellence throughout the Valley and was widely mourned when it was lost to fire in 2005.

By moving to Greenfield to open Hope & Olive in 2007, the partners were able to expand their commitment to feeding their friends and neighbors with fresh local food. They play a leading role in the Free Harvest Supper, a huge meal for 1,000 served on the Greenfield Common each August, by opening Hope & Olive’s kitchen and heading up the preparation of food that local farms and restaurants donate for the event. Throughout the year, Hope & Olive hosts monthly Free Soup & Game Nights where guests enjoy a free buffet of soup and bread and are invited to support a designated non-profit.

Jim notes that nutritious local food and the local economy have been CISA’s mantra for twenty years now, and “people in our area have gotten the message.” At Hope & Olive, the local choice seems obvious. The ingredients that have traveled the shortest distance are the freshest. Our area has an abundant variety of small farms. The farmers who grow the food are friends and customers. Hope & Olive can partner with farms to grow crops for specific dishes. The restaurant’s website states, “We have worked to create a place that wholesomely nourishes our employees and the surrounding community.” Congratulations, Hope & Olive, on your resounding success! CISA is proud to honor you as a Local Hero.