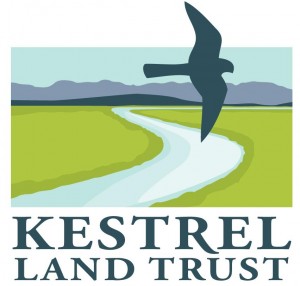 Kestrel Land Trust was founded in Amherst in 1970 as a volunteer organization known then as “The Kestrel Trust”. Kestrel worked closely with the town’s Conservation Commission during the ensuing decade, during which the majority of conservation land in Amherst was protected.

In the 1980s Kestrel expanded its conservation efforts into the nine towns surrounding Amherst. Kestrel frequently collaborated with Valley Land Fund, the Hadley-based land trust that worked in communities throughout Hampshire, Franklin, and Hampden Counties.

In 2011, several years after beginning a concerted effort to expand its capacity and become a professionally-staffed land trust, Kestrel merged with Valley Land Fund to become Kestrel Land Trust. The merger was designed to address challenges of land protection in the Valley in the 21st century and to accelerate the pace of land conservation in a context of rapid change and development in the region. Kestrel now aims to protect 1,000 acres each year, while building a comprehensive stewardship program that actively engages the community.

Expanding its efforts throughout a 19-town area, Kestrel’s mission is “to conserve the land that sustains the quality of life and ecological integrity of the Connecticut River Valley.” This includes a range of conservation priorities:

• The Connecticut River and its tributaries

• Woodlands, wildlands, and farmland in the Quabbin and Hilltown areas 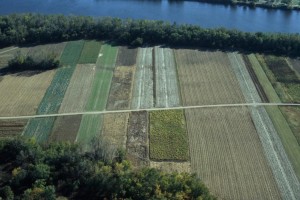 Given that Kestrel serves a region with great prime soils, farmland preservation is a top priority for the organization. Kestrel has engaged in a long-term effort, for example, to preserve Hadley’s Great Meadow, an area of 350 acres that has been farmed since the founding of Northampton more than 350 years ago. Parcel by parcel, Kestrel has worked over many years to preserve this valuable land along Cemetery Road between the Norwottuck Rail Trail and the Connecticut River. Currently, the land trust is helping to place an Agricultural Preservation Restriction on 14.5 acres of prime soil there. This will leave just 49 acres in the area of the Great Meadow most at risk from development still to be preserved for agriculture in perpetuity.

Another recent project illustrates not only the importance Kestrel places on farmland preservation, but also the integral relationship between protecting agricultural land and preserving wildlife habitat and water resources. Kestrel worked with the Town of Leverett and the Rattlesnake Gutter Trust in 2012 to conserve Teawaddle Hill Farm, a picturesque 147-acre parcel of open pastureland, woodland, sugarbush, wetlands, trails, and woods roads with a classic New England farmhouse and barn. 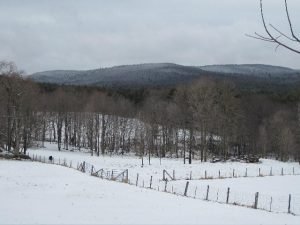 The Teawaddle property also has one of the best views of Brushy Mountain. The 3,486-acre Paul C. Jones Working Forest on Brushy Mountain was conserved with a CR in 2011 by the Massachusetts Department of Fish and Game in partnership with Kestrel Land Trust and Franklin Land Trust.

Teawaddle is the last remaining part of a larger 18th century farm complex in Leverett. The farm has been restored by Gwen Williams Mitchell, Bill Mitchell, and the Williams family since Gwen’s family purchased the farm in 1961. It now produces hay and maple syrup and raises cattle. The Conservation Restriction (CR) on Teawaddle Hill Farm preserves its historical significance as a working farm, and permits sustainable agriculture and forestry into the future.

In addition to conserving the farm and ensuring public access for passive recreation, protecting Teawaddle Hill Farm also strengthens an extensive wildlife corridor that extends from Leverett to North Amherst. And, the streams and wetlands on the property flow into Doolittle Brook in East Leverett, conserving critical water resources in this part of the Connecticut River Watershed.

Through its combined history with Valley Land Fund, Kestrel Land Trust has helped protect 19,000 acres of land, including many properties that are part of the iconic landscape for which the Valley is known. To learn more about Kestrel’s current projects, and for an interactive map of the properties Kestrel has helped preserve, visit kestreltrust.org.