Lessons learned on the farm provide fodder for Field Notes 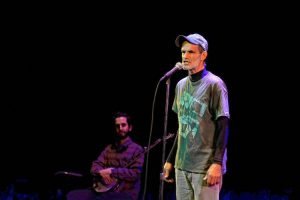 Danny Botkin, of Laughing Dog Farm in Gill, spoke at “Field Notes,” a storytelling show Sunday in Northampton focusing on farmers and others in the local food industry. STAFF PHOTO/MAX MARCUS

NORTHAMPTON — Farmers, like everyone else, learn through experience. And there may be something in their stories that others too can learn from.

This may have been the appeal of “Field Notes,” a storytelling show at the Academy of Music on Sunday, featuring a roster of people in various parts of the local food industry, most of them farmers of different kinds.

The show was organized by Community Involved in Sustaining Agriculture (usually called CISA), as a way of humanizing farmers and food workers beyond their appearances at farmers markets, said Claire Morenon, CISA’s communications manager.

CISA organized a similar show a year ago, but has not ventured any further into performance-type events, Morenon said. Last year’s show must have been well received: the theater on Sunday was packed.

In the course of the two-hour show, each speaker spoke on stage, alone, for about 10 or 15 minutes each. In preparing for the show, Morenon said, CISA worked with the speakers on how to present their stories.

The speakers came from around the Connecticut River Valley, from as far south as Agawam and as far north as Guilford, Vt. Most were from Franklin and Hampshire counties.

Most relevant to Franklin County, Danny Botkin of Laughing Dog Farm told a story about how a sad day on the farm led to a learning experience shared by the farmers and the goats.

A mother goat had been in labor for two days and was making no progress. Botkin realized the problem: her skeleton was mishapen from arthritis. There was no way the babies could get out.

“The suburban kid who always dreamed of farming steeled himself against what had to be done,” Botkin said.

The babies were triplets. Because they had no mother, Botkin raised them in his house.

“The entire herd turned tame, and stayed that way,” Botkin said. “It was as if they collectively decided, ‘We want some of that.’”

“They taught us the importance of early imprinting and bonding with all of our critters. Goats, cats, dogs and, most important, us humans,” Botkin said. “Who’d’a thunk we’d end up gleaning such life lessons from a herd of thick-skulled, woolly farm animals?”

Pete Solis of Mockingbird Farm in Easthampton recalled learning patience from an owl who had eaten one of his turkeys.

Solis found the owl on his farm, near the decapitated turkey, ensnared on a fence. He called wildlife management agencies and was referred to a rehabilitator who dealt with owls.

The rehabilitator said, “‘Dude, just let it go,’” Solis recalled. “‘Just watch out for the talons.’”

The owl hissed and snapped its beak the whole time Solis was untangling it from the fence. Now, whenever he’s in similarly difficult situations, Solis said, “That groovy voice comes back to me, and I think, ‘Dude, just let it go.’”