By Arielle Andler, CISA Intern
Published in the September 2014 E-Newsletter—sign up here! 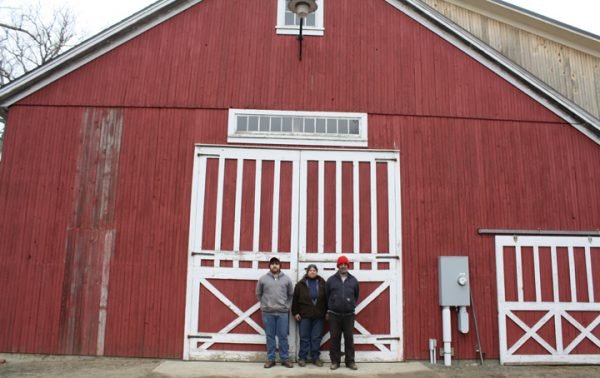 Even a quick conversation with Edwin Matuszko, Linda Kingsley, and their son Josef of Twin Oaks Farm reveals that the family loves to grow food. Both Edwin and Linda were attracted to farming at a young age, and it is clear that Josef, a fourth generation farmer, shares their enthusiasm. “This is what I was raised doing. I love it,” Josef explains. Over the course of our meeting, Edwin, Linda, and Josef each described the satisfaction they receive from growing good quality food in rich Pioneer Valley soil.

Farming in Hadley runs back three generations in the Matuszko family. Edwin grew up on Twin Oaks, in the same house where he, Linda, and Josef now live. He remembers his grandfather and father on the land. Linda Kingsley also got an early start to farming, starting off with summer farm jobs as a teenager. The couple actually met in a field of pickling cucumbers! In 1979, after getting married, Edwin and Linda leased Edwin’s family’s land and began growing roughly 6 acres of cucumbers. After farming the land for fifteen years, the couple decided to purchase the land from Edwin’s family. Currently, they grow summer squash and zucchini, butternuts and other winter squashes, as well as cabbage, peppers, beets, leeks, eggplants, and ornamental fall crops such as Indian corn and pumpkins.

While they do some direct sales, the farm is predominately a wholesale operation and has been that way from the very beginning. Back when they started farming, Linda and Edwin explained, “there weren’t really famers’ markets or CSAs; if you were going to farm it was wholesale. Most of the farms in the area were growing cucumbers for pickles.” Edwin and Linda were among the founding farmers of Pioneer Valley Growers Association (PVGA), a marketing co-operative. The original purpose of PVGA was to set fair prices for farmers, assist with supply, and look for new markets. Presently, PVGA serves as an aggregator and distributor with cooling facilities, loading docks, and billing offices. Edwin and Linda have a strong sense of pride the work and mission of PVGA. They both have served in just about every seat on the board and are still active members of the organization.

PVGA sells to supermarkets throughout New England and to the Food Bank of Western Massachusetts. In addition to their sales through PVGA, Twin Oaks sells produce directly to farmstands across Massachusetts and through dealers at Boston’s wholesale market, the New England Produce Center in Chelsea. In order to meet the requirements of these wholesale buyers, Twin Oaks has achieved two food safety certifications, GAP (Good Agricultural Practices) and Commonwealth Quality.

Creating a strong local agricultural community is of the utmost importance for Edwin, Linda, and Josef; this is not only apparent from their involvement in PVGA, but also the close bond they have with their neighbors. The family spoke very fondly of the supportive farming community surrounding the farm in Hadley. “There are about eight to ten farms in a two mile radius and we all work together,” Edwin explained. “I could have my neighbor call me up at four in the morning asking to use my generator because his is out and I wouldn’t think twice.” The neighbors rely on each other for information, equipment, and errands, and the farmers at Twin Oaks feel blessed to be part of such a tight-knit, supportive group. Edwin, Linda and Josef recognize that they farm rich soils in a community rich in care and cooperative support, and hope to continue to grow good food in that environment for a long time to come.