Though a nursery may look like a calm enough place, in reality, young plants are being prepared to withstand a harsh life outdoors. At least that’s what Andrew Cowles of Andrew’s Greenhouse explained to me when I went for a visit. 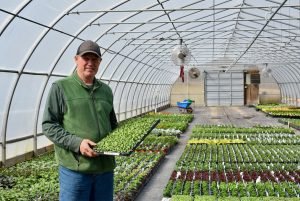 Our first stop on the tour of this Amherst farm was the nursery greenhouse, where seeds were being sewn and young seedlings were sprouting happily. On one side, there were trays of basil and tomatoes like small forests and on another, begonias and impatiens that grew from cuttings. Certain plants were getting “the treatment” in what Andrew called the “sweatbox,” a specially designed table that maintains an atmosphere of 75º and mists the plants regularly.

Andrew pointed to a table on the right, saying, “When they get old enough, like those begonias over there, they’ll be going out.” He commented that here, the young plants live the good life before they get “hardened off,” or prepared gradually for a life in the elements. This is a delicate process, as some plants are more sensitive than others. Andrew motioned to the tomatoes, explaining, “We’re going to take them out tomorrow because they don’t like this wind today.”

Moving into the retail greenhouse that houses mature plants ready for the garden, Andrew revealed to me his secret weapon. Like many farmers, Andrew fights against aphids and thrips and other pests, though, unlike all farmers, he has enlisted the help of miniature workers. He picked up a sachet of these beneficial insects – mites, tiny wasps, nematodes – that they use to gain the upper hand.

To show me how this works, Andrew brought me over to one of many pots of barley interspersed throughout the greenhouse and pointed out the black specks that covered the plant. He explained that these were barley aphids – a monocot aphid – that wouldn’t go after his dicot broadleaf plants. “We have these around here,” he said, “so if our wasps are in here and there aren’t any other aphids to eat, they have these.” To the untrained eye, purposefully breeding aphids in the greenhouse would seem dangerous, and Andrew admitted that clients are often surprised to see these pest-infested barley pots.

Still, Andrew has entered into a centuries-old dance playing out between predator and prey, and he does not always have the lead. Though he has noted a difference with the beneficial insects, he added that certain pests, like foxglove aphid, have begun to fight back against this new technique. “Everything doesn’t always work – the insects are always evolving, and they’re smarter than us,” he concluded, adding, “And if it was so easy, everyone would do it.” 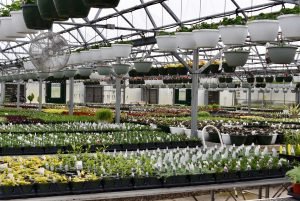 Like any farmer, the weather is also a constant concern for Andrew. So, to better understand these meteorological phenomena, he has been keeping a diary for the last 40 years, a practice that he learned from a neighboring farmer. This allows Andrew to track patterns and compare conditions, like last year when he noted many consecutive days that were “windy and cold, windy and cold.” This year, Andrew calls “a good year,” remarking that “we’ve had a lot more sun than the last few years, and it helps out a lot.”

This diary also allows Andrew to assess the speed and direction of climate change. Whereas the first autumn frosts used to come toward the end of September, he observed that we don’t see frost now until the second week of October. The same is true of the spring, which used to get a last frost well into May. Now, he said, “My diary can tell you in the last 12 years we haven’t had frost after the 11th of May.” For Andrew, this isn’t just a process of warming, but one of increasing unpredictability: “You have these fluctuations of weather and everything’s different everywhere all the time.” 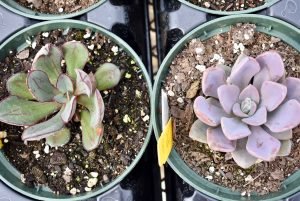 Despite these challenges, Andrew has built a successful nursery from the ground up. He followed his grandfather and his father before him in the farming life, though he chose early to establish himself as a grower-retailer of garden and vegetable plants. Andrew expressed that this was a product of his time and spoke of evolutions in the farming landscape. He said that “back in the old days, all the vegetable growers were called ‘market growers’ and they did some things in the greenhouses, but then they went out into the field and did everything else. And as the years went along, the 60s into the 70s, the greenhouse industry expanded a lot. Then annual gardening took off, and the 90s came and it was just – wow! You could build a big greenhouse every year, and you never produced enough plants.” 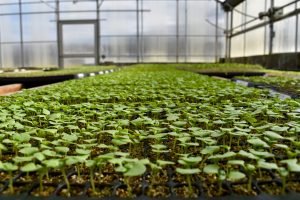 Now, another generation has passed and Andrew is looking to pass his farm business onto a young farmer, though he remarked that “it takes a special person to be able to do this.” After decades of fine-tuning his operation, Andrew said that he is looking for someone with the knowledge, skills, and techniques necessary to replace him, adding, “You have to know when to do things on good days. You need to know when to put the plastic on a greenhouse. You just get that knowledge of when you need to do things. It takes a lot of years and a few mistakes.”

Until then, Andrew is going to keep tending to his young plants, maintaining his diary, and overseeing the dance of co-evolution between plant and predator. Luckily, the rhythm of the farming life doesn’t bother him. He explained, “We don’t have any kids, so these are our children. We put all our lives into it and it’s a year-round thing. You know, people ask me, ‘Well, what do you do in the off season?’ Well, we’re getting ready for the next season.”