The smell of freshly brewed tea fills the room—kombucha is on the production schedule today for Artisan Beverage Cooperative in Greenfield, and as General Manager Garth Shaneyfelt tells me, kombucha begins with tea. Through the magic of fermentation, the sweetened tea will soon be transformed into the popular tart and effervescent beverage known as kombucha. Kombucha is just one type of beverage produced by the fermentation experts at Artisan Beverage Cooperative. They also produce mead, an alcoholic beverage made from fermented honey, and an alcoholic ginger drink they call Ginger Libation, made from fermented ginger and fruit juices.

This worker-owned cooperative was formed in 2013 from the merging of two local companies: Katalyst Kombucha, producer of kombucha since 2005, and Green River Ambrosia, producer of mead since 2007 and Ginger Libation since 2010. Katalyst Kombucha had already formed a close relationship with Green River Ambrosia, utilizing extra space in the facility to produce its beverages. Shared values of supporting sustainable agriculture and the local economy, along with the promise of operational efficiencies, made the merger a natural decision. Restructuring into a co-op was another way to evolve further and help ensure the sustainability of the business through worker ownership and governance. Garth explains, “We want to support the local economy. That’s why we became a worker co-op—because we’re interested in staying here.” Artisan Beverage Cooperative has 6 worker-owners and 8 employees. After 2 years there, an employee can become an owner.

Garth came from the Green River Ambrosia side of the business, and got his start in home brewing. Mead is his specialty. He explains that recent interest in craft brews has caused explosive growth in domestic mead production. When he started Green River Ambrosia in 2007, there were fewer than 30 meaderies in the country. Now there are about 350. Of all the products made at the brewery, Garth’s favorite is still the mead, specifically the Whiskey Cyzer. This is an apple mead made from fresh pressed apple cider (from Pine Hill Orchards in Colrain and Clarkdale Fruit Farms in Deerfield) and late season honey (from Warm Colors Apiary in Deerfield and other local producers), that is aged in whiskey barrels for 6 months. He tells me this one is great for the holidays. 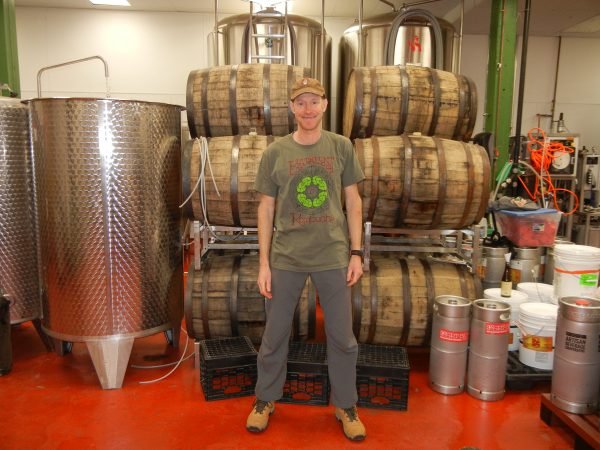 When possible, the ingredients are sourced from the Pioneer Valley. Local Libation uses ginger from Old Friends Farm in Amherst. The schizandra berries in Schizandraberry Kombucha come from Chang Farms in Whately. But where availability or climate makes this impractical, they will source regionally (e.g., Concord grapes from upstate New York). And for ingredients that are unavailable domestically, Artisan Beverage Cooperative purchases from democratically-organized small farmer cooperatives. The tea and sugar is purchased in this way, through Equal Exchange, with incredible impact. “We are supporting an entire village in Paraguay by buying their sugar,” Garth tells me. Responsible sourcing may be more complex and costly, but it is a commitment that Artisan Beverage Cooperative has made to ensure it has a positive impact on farmers and their communities.

Both Katalyst Kombucha and Green River Ambrosia were companies that began at the Western Massachusetts Food Processing Center, a community fee-based food processing facility in Greenfield managed by the Franklin County Development Corporation (known locally as “the CDC”). After merging and restructuring into Artisan Beverage Cooperative, the group remains at the CDC, but now as tenants. The co-op has its own wing with an office, a newly built tasting room, and a factory that produces 5 days a week.

The product offerings and distribution channels have been steadily growing. The product mix is 55% kombucha, 40% libation, and 5% mead. About half of the Katalyst Kombucha is distributed in kegs (with 32 kegerators in the region for chilled storage and dispensing), and the rest is distributed in bottles and growlers. You can find Katalyst Kombucha at Green Fields Market, River Valley Co-op, and Cornucopia in varieties such as Bliss Berry, Concord Grape, and Jasmine. The Libation line is also available in bottles and on tap and is distributed through Berkshire Brewing Company. You can find Ginger Libation year-round, and a cranberry version, Local Libation, in the winter. There is also a blueberry version for summer and fall. The Green River Ambrosia meads are available in bottles only and include such varieties as Valley Cyzer, Winter Warmer, and Chamomile, plus a lemon mead made especially for the local Mutton & Mead Medieval Festival.

Artisan Beverage Cooperative now also has a relationship with Performance Food Group, the third largest food service distributor in the country, which has greatly expanded product reach. Garth is clear that the co-op’s biggest challenge is managing these diverse sales channels and the large distribution area. For example, Ginger Libation is now in 35 states. The staff finds local distribution to be the most fulfilling due to the personal interaction it entails. “Our best relationships are our direct relationships—being able to go into the stores and do demos.”

When I ask about the co-op’s plans for the future, Garth tells me, “In the next 5 years, we will probably outgrow the CDC. A lot of us live close. I prefer to walk or bike to work. We want to be based in the place we live.” This commitment to staying in the community, like the commitment to responsible sourcing, represents a very different philosophy from business as usual. And, it has not gone unnoticed. Garth says his greatest reward in this business is that “the customers really appreciate what we do, and we get support from the community.”

To show your support and learn more about Artisan Beverage Cooperative, you can stop by on December 4th for the ArtBev Holiday Market. You can tour the brewery, meet the staff, purchase gifts from guest vendors, and of course, sample the co-op’s high quality specialty brews in the brand new tasting room.