Upon walking into Auntie Cathie’s Kitchen on Elm Street in West Springfield, you will find the place furnished with a vintage stove and fridge, donated tables, chairs, and couches from friends and family. The café has “a little piece of everybody,” says owner Cathie Albrecht. When I arrived, Cathie and her staff were busy preparing foods and wrapping baked goods, but Cathie, wearing a t-shirt sporting the phrase “locally grown”, was able to take a break to tell me a little more about the operation. As we sat on couches by the front window, Cathie began by telling me about her history.

Cathie Albrecht started over ten years ago with a farm stand full of homegrown produce and a roadside bakery in Wales, MA, but eventually outgrew the location and continued on to buy 3Café in Springfield. At the new place, she always used her own produce from the farm, and when the business outgrew the amount of produce her farm could supply, they started buying from Red Fire Farm, The Kitchen Garden, and several other local farms. After four years, the location again seemed a little small, so she moved to a shared space in Longmeadow. However, the shared kitchen space was not ideal either, so Cathie set out to find her own place. Now, she has been at the current location on Elm Street in West Springfield for just about a year, and is loving it. She says her patrons have been great in following her throughout the process.

Auntie Cathie’s Kitchen uses as many local ingredients as possible. The café has a good relationship with The Kitchen Garden in Sunderland, and Cathie especially likes their salad mix, beets, and onions. “Anything that they have, we buy.” Her own experience growing vegetables on her farm in Wales has convinced her that the quality and taste are much better when food comes fresh from the farm. Of course, she only wants to serve customers the freshest food – and that means as local as possible. “You know how hard those farmers work too. So you’re supporting them, and bringing really, super good food to your customers.” Additionally, Cathie gets produce from New Lands Farm, which is down the street in West Springfield. They provide eggplants, tomatoes, and peppers. Because West Springfield is close to the Connecticut border, Auntie Cathie’s Kitchen also uses produce from farms in Connecticut like Oxen Hill Farm in Suffield and Scantic Valley Farm in Somers. 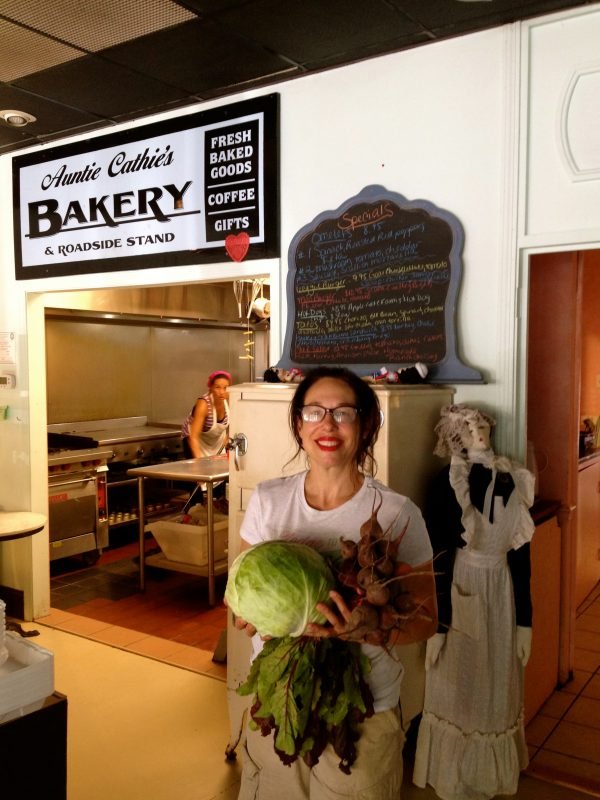 Cathie told me that she truly loves running a restaurant and really couldn’t see herself doing anything else. “I love what I do. I love the food … I love the color … I just love it. I feel like it’s a really great way to be creative. And I love the people too. My customers are great,” she said, and then added, for emphasis, “I have really good customers – they just love this place.”

About halfway through our conversation, a woman from Oxen Hill Farm stopped by to deliver some vegetables. She brought beautiful beets, zucchini, and large heads of cabbage. Cathie planned to make chocolate zucchini muffins and coleslaw, and to use the beets in a specialty, curried chickpea sandwich. Cathie told me that fresh cabbage is the best way to make coleslaw, because it doesn’t lose its crunch. “That’s wrong – to use a bag of cabbage,” she remarked.

One of the things that makes Auntie Cathie’s particularly special is that there are no other similar cafés around her. Actually, all of her locations have shared this quality. Auntie Cathie’s tagline is: “A dedicated gluten-free bakery and quaint vintage café serving breakfast and lunch using local, fresh ingredients.” The café’s dedication to serving fresh, locally grown food is unique in the area. Cathie says she enjoys the opportunity to bring local food to people who may not have experienced it before, or who don’t have regular access to it.

Auntie Cathie’s is also one of the only “true gluten-free cafés, at about 95% gluten-free.” Everything on the menu is, or can be prepared, gluten-free. Cathie started making gluten-free items ten years ago when a customer asked her if she had any, and she didn’t even know what gluten-free meant. She picked up some books and started practicing. After working at it since then, she seems to have perfected the strategy. Now, she has started to create her own recipes, and offers gluten-free muffins, cupcakes, loaves of bread, hamburger buns, and cookies, among many other things.

When asked if there was anything else she wanted to highlight, Cathie told me about her amazing staff. Cathie attributes her success in large part to the help of her assistant chef and other employees, who she says are equally creative, hard-working, and aware of customer needs. Together, they enjoy creating new recipes, providing gluten-free goods, and feeding fresh, local food to customers.

If you stop by Auntie Cathie’s Kitchen sometime this summer, you might try the Loco Local Salad which they offer weekly – with constantly changing ingredients depending on what local products they have on hand. One of their seasonal specials is Barbeque Chicken-Peach Salad, with local blueberries, corn, and feta. When asked, it was hard for Cathie to pick just a few of her favorite items. She told me about their gluten-free, vegan oatmeal raisin cookies, and gave me one to try – it was moist and delicious, rare for a gluten-free item. Cathie also loves the grass-fed burger from Scantic Valley Farm on a homemade gluten-free bun, served with local lettuce and tomatoes.

Next time you are in West Springfield, head over to 217 Elm Street to create your own list of favorites off the menu. Sit down on the couch, make yourself comfortable, and who knows – you might just find a new favorite neighborhood café.