Many motivated young farmers have come to the Pioneer Valley in recent years. Some have been attracted by the area’s rich soil and others by the strong sense of community support. These were important factors for Chris Reid and Anna Maunz of Bare Roots Farm, who were happy to discover CISA’s work. Chris says, “The fact that CISA exists and is doing this promotion of local agriculture is part of the package that makes this area great and also a viable place for so many young farmers to exist.” Still, Chris adds, it was the many public libraries and good radio stations that sealed the deal for the young couple. 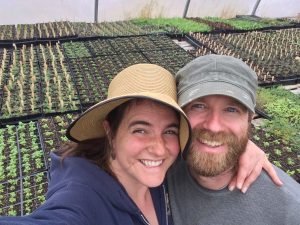 These two Pennsylvanians with a background in fruit and vegetable farming headed off on a road trip in 2011 in search of a place to call home and begin their farming business. The pair turned to New England Land Link, which Anna describes as being “like match.com, but for farmers and land.” With the help of this program, Chris and Anna landed on a local blueberry farm but eventually settled down in Chesterfield, where they opened Bare Roots Farm, a small greenhouse and nursery.

In its six years, Chris and Anna’s nursery has grown and evolved, although its guiding mission has stayed the same. Chris describes, “When we started growing plants, the idea was to do an entirely edible garden.” They had been inspired by the victory gardens that were popular during the World Wars. During this period of stress on the nation and its food supply, citizens were urged to plant edible gardens in their yards or public spaces to contribute to the war effort. Chris and Anna took this idea of patriotism and applied it to looming environmental catastrophe and community resilience. “We couldn’t see a way to organically grow as much food as people needed, but if you took the idea of a victory garden and applied it to environmental struggles instead of war, we could grow a lot of food for ourselves. If everyone had a really robust garden, you’d reduce how much everyone else needed to grow to support the world.”

This mission to feed a growing planet and reduce the environmental impact of our food systems is what inspired Anna and Chris to create Bare Roots, whose official motto is “useful.organic.plants.” The pair started out with vegetable plants and medicinal herbs, but have since expanded into flowers, trying to pick those that support pollinator populations or are edible. Their goal is to add fruiting trees, specifically heirloom apples, onto the menu in the coming years. 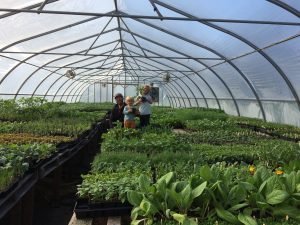 The greenhouse at Bare Roots Farm

Human relationships have also been an important part of this mission of food autonomy. Chris and Anna, who sell their plants at the Amherst and Northampton farmers’ markets in addition to their farm stand in Chesterfield, explain that “most of the day at the farmers’ market is spent talking about plants rather than selling plants, which is great.” Chris adds, “I love talking about [plants] because I really want everyone to grow their own food. I have this great knowledge that I rarely get to use or share with people, and farmers’ markets are a great way to do that, where I can answer questions and give advice.”

Part of this education for the future gardener has been about selecting the right varieties. While common varieties, like the sungold tomato, continue to be best sellers, Anna emphasizes the importance of heirloom varieties. “Our original selection was based on this idea that there are so many people who still believe that a tomato looks like a grocery store tomato or that there’s only one kind of thyme. So it’s really being able to expose people to this idea that there are different varieties out there.”

The success of these future gardeners is also an important part of Chris and Anna’s mission. Chris explains that they try to choose plants that are “easy and reliable, so people don’t get to the end of the season and think ‘Oh, I’m a terrible gardener. I’m never going to do this again.’” Instead, Chris wants to set gardeners up for success so they will return to their plot of land the next season. For Chris, this local production has the added boon of reducing food waste. “The more local your food is, the more sustainable. And people are way more willing to eat stuff out of their garden that they grew themselves with cosmetic problems than if I, as a grower, try to sell someone a tomato with a blemish.” 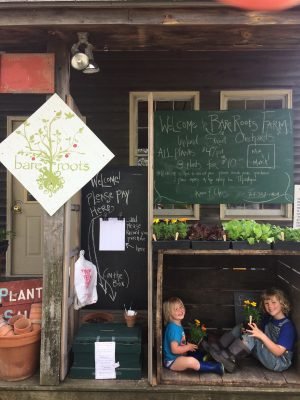 Like many other young farmers, Chris and Anna have not always found this mission easy to maintain. The pair note that any struggles they have faced along the way have not been linked to growing plants, but instead have their roots in the difficulties of growing a business from scratch. Anna explains that there were early learning curves with logistics and connecting to wholesale buyers, questions of land access, and, of course, finances. She adds that, “Even in this Valley, where everyone is really in support of young farmers, it’s hard to finance it and make it happen.”

Now in their sixth year, this young farm is going through some growing pains as Chris and Anna toy with the idea of expanding their operation and finding the balance that is right for them. Chris reveals, “Financially in this first few years it was, ‘Should we keep doing this? Is this just a terrible choice for our lives?’ And now it’s, ‘Ok, no, it makes sense to keep doing it.’ It has challenges, but it’s a viable business. And we love it, which helps.”

This unwavering passion and a strong sense of mission have carried Bare Roots through its early years. Now, having supported so many backyard gardeners and porch planters, the community will be here to carry the farm through many more.