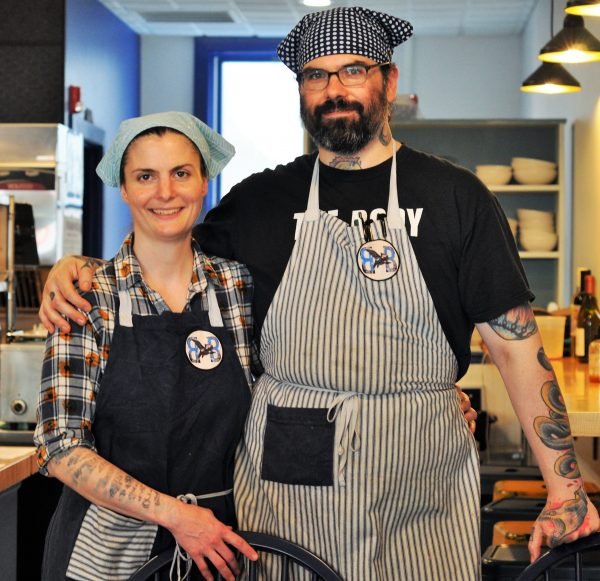 Before Aimee Francaes and Jesse Hassinger opened the doors to their restaurant, Belly of the Beast, the couple hit the road – touring pastures and barns throughout the Northeast. “We wanted to visit all of the farms where we source our meats from to see that the meat we were getting was sustainably raised and the animals were pastured,” Jesse told me on a recent hot July morning. Aimee jumped in, “And we also wanted to build those relationships with the farmers!” Sitting side by side at a table in their restaurant on Main Street in Northampton, the pair explained that “Belly of the Beast is comfort food, mindfully made.” ‘Mindfully made’ means that Aimee and Jesse know exactly where their ingredients come from and how they were produced. “It allows us to really stand behind everything that we serve to people,” they proudly declared.

One of the greatest accomplishments of Aimee and Jesse’s travels was discovering the delicious chickens raised at Eden Pond Farm in Bernardston. It had been a dry spring and the couple had witnessed first hand how dried out pastures were impacting neighboring farms. The pair was expecting to find more arid fields at Eden Pond but they were ecstatic when they arrived to discover an oasis perfect for raising poultry. “Everything was abundantly lush and the pasture was doing just great. We did a taste test comparing the chicken [to neighboring farms] and it was obvious that Eden Pond’s chickens were getting all those big fat grubs and getting the nutrition from that specific area with a pond right there. It was a wonderful experience to see those differences firsthand and then taste the differences in the chicken.” Unsurprisingly, Aimee and Jesse decided to bring chicken from Eden Pond Farm to the Belly of the Beast menu.

Nearly every ingredient at Belly of the Beast comes along with a similar story of tracking down the greatest farm for the food – and virtually all of the farms are local! When I asked which other farms from the Pioneer Valley regularly make it onto the menu, the pair began ticking off names. There’s Sage Farm in Montague, Kitchen Garden Farm in Sunderland, Crimson and Clover Farm in Florence, and that’s just to name a few. In fact, all of their meat comes from within 150 miles of the restaurant – and most of their produce does too. To keep prices reasonable, they buy in whole animals and do the butchering themselves in-house. “It’s the most cost effective way for us to be able to provide this quality of meat to the community at a price that is as affordable as possible,” Aimee pointed out. “We’re maybe a dollar or two more expensive for a sandwich than other places. Sure, sometimes you can feel that. But on the other hand, it’s this moment of ‘wow, only a dollar more and I can know exactly where my meat is coming from – compared to somewhere else where you just have no idea.’” 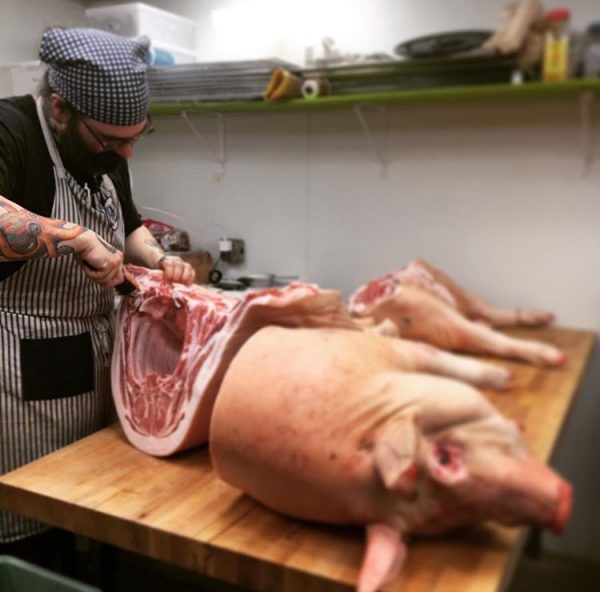 Jesse – who has taken on the role of Chef de Cuisine – developed a deep love of cooking and eating during his childhood. His parents were passionate home cooks who loved to experiment with cuisines from all over the world, pulling in flavors from India to Japan to North Africa and much more. Amidst these culinary travels, Jesse always found himself circling back to his family’s roots in Central Pennsylvania – which he affectionately describes as the ‘Northern-most part of the deep south.’ During summer visits to stay with his grandmother down in PA, Jesse recalls the formative experience of waking up early to run through farmers markets packed with delicious southern fare alongside Pennsylvania Dutch classics. As Jesse puts it, “The spirit of how I approach my cooking is fed from my upbringing of having Southern trailways meeting up with the classic Asian flavors.”

You can join Jesse as he explores his culinary origins alongside chefs Neftali Duran and Alex Kemper (of Little Trúc) for a Belly of the Beast special event on August 29th. During ‘Homeland Hearth,’ each chef will craft a dish that speaks to their idea of what ‘homeland’ means to them. The event promises to be a unique experience that will combine different cuisines from around the world into one complementary dinner. 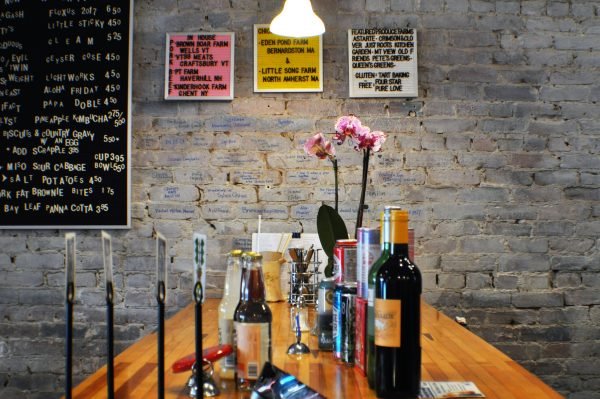 If you miss Homeland Hearth, have no fear – the ever evolving menu at Belly of the Beast offers up specialties from around the world on a daily basis. Swing by for a traditional Southern-Pennsylvania Dutch breakfast featuring the specialty scrapple – slow cooked pork chopped finely with mixed herbs and corn meal, thinly sliced and griddled into a crispy goodness. Delicious alongside biscuits and gravy. If you’re not in the mood for the taste of the South, sample the Xiu Mai Meatballs – prepared with ground pork, cilantro, water chestnuts, and shaoxing vinegar. Or try the Jamaican Beef Hand Pie, or maybe the Fried Shan Tofu with some Black Flag Kimchi (there are plenty of other tasty vegetarian options available too!)

Jesse and Aimee have a passion for experimenting with new flavors and influences – there’s never telling what fresh dish might pop up on your next visit to Belly of the Best. After all, when you’re riding the wave of cooking with the seasons and putting every cut of meat that comes off the butchers table to use, there’s constant opportunity to innovate. There’s one thing, however, that you can count on staying steady: Aimee and Jesse’s commitment to their mission of serving up ‘Comfort Food Mindfully Made.’ Aimee puts it best herself: “Our mission statement and what we’re based around is something that’s not going to change. We’re always going to be sourcing animals from farms that we know and work with, are local, and are using good practices. We want to be able to create something which we can share with our guests and have a shared experience. There’s this further level there that you don’t get in any other type of business.”

Tags: Belly of the Beast