Last autumn, Lenita Bober and her team at Blossoming Acres harvested their fields of sweet corn in rubber boots. “It was like harvesting in a pond,” Lenita explained to me during a recent visit to the farm. Blossoming Acres is known for having fresh, delicious sweet corn at their farm stand—as Lenita proudly says, “We pick it every day!” During 2018, one of the wettest years in recent memory, that commitment to fresh meant strapping on knee-high boots to trek out through flooded fields. 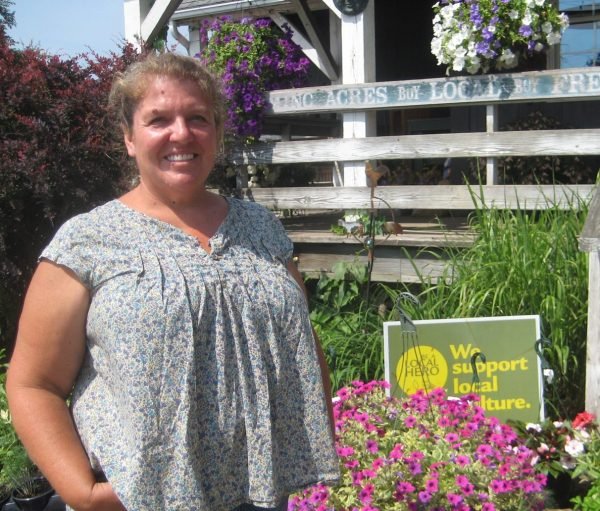 2018 was a difficult year for farmers across the Valley. For Lenita and her husband Jeff, that meant tackling challenges one after another. Lenita explained, “Spring was so-so but we figured summer would be better. Summer wasn’t better but we figured that we’d catch up in the fall. That just never happened.” The wet weather didn’t just impact their famous sweet corn. The farm lost over 13 acres of winter squash and pumpkins in soaked fields. “It all just rotted in the fields. And everything else was short all summer.” To make things worse, the constant storms throughout the fall kept customers cooped up on the weekends. “A farm like this counts on that fall business, people going out and doing the ‘fall in New England’ thing … It’s heart breaking and it’s scary because you’ve already laid out all the money.”

Fortunately, Lenita and Jeff are no strangers to the roller coaster of farming life. The pair has been farming their land in Southwick for more than 20 years. Back in the early years of Blossoming Acres, tobacco farming was a primary crop in the Valley and many people thought Lenita and Jeff were foolish to devote their 100 acre farm to growing vegetables and flowers while tobacco prices were so high. For Lenita, money was never her driving motivation in founding the farm. “You certainly need the money to keep running but to me it’s not all about the money.” The pair took pride in growing vegetables and found pleasure in “growing something that’s good for people.”

One of the main outlets for their produce has long been the Lanesborough Farmers Market, which Lenita has been working since the late 80’s. Over the years, the Blossoming Acres stand has become  a fixture of the market. The farm sends off two trucks filled to the brim with vegetables and baked goods each week during the warm season to supply a market display that stretches over 16 tents. Lenita attends every market herself and despite the intense hustle of the busy market, she has loved getting to know her regular customers over the years. “We’ve got customers now who were little kids coming with their parents years ago. Now they’re parents themselves, bringing their own kids.”

Fortunately, you don’t need to wait until market season to get your hands on some fresh Blossoming Acres produce. Their Southwick farm stand is open 11 months a year and freshly harvested vegetables from their greenhouses will already be lining the shelves by the end of February. Try out winter-grown lettuce, spinach, mache, claytonia, mixed greens, and more. By the time May hits, they will have a fresh crop of greenhouse-grown tomatoes! To supplement their home-grown produce, Lenita stocks the farm stand shelves with products from local farms throughout the Valley including eggs, milk, honey, maple syrup, beef, pork, and much more. Meanwhile, the on-site bakery makes delicious treats year-round including pies, pastries, and stuffed breads. Their kitchen is always ready to serve up a hot bowl of soup, whether it’s chicken noodle, chili, or squash, and they offer prepared meals to go including lasagna, meat pies, and more. As Lenita put it, “You could do almost all your shopping here.”

The Blossoming Acres Farm Store is open 11 months a year.

The farm stand is also the home base for the farm’s’ unique CSA (Community Supported Agriculture) share. Members of the Blossoming Acres Farm CSA receive a debit card at the beginning of the season which they can use at the farm stand to buy anything grown or baked at the farm anytime they’d like. This gives members the flexibility to buy what they want when they want while supporting the farm through their upfront membership payment. Members also get a seasonal surplus box of produce twice a month during the peak growing season. Sign up with the early bird discount by mid March—early bird shares range in price from $150 to $600 and members receive extra value in spending credits at the farm stand.

Throughout the twenty years that Lenita and Jeff have owned their farm, the couple has developed a deep understanding of their land. Lenita has felt a change in recent years. 2018’s intense heat and downpours were not typical, but she views these extreme weather patterns as an early impact of climate change and an indication of what may come in future years. To make sure the farm will be resilient, Lenita and Jeff have been exploring ways to adapt to a changing climate. For example, they plan to begin experimenting with southern-bred crop varieties that have a higher tolerance for heat. Despite the uncertainty of the future, Lenita and Jeff are confident that they’ll be able to adjust to whatever happens down the road. “You do the best you can and just go on to the next year. Every year is a gamble and I’m just looking forward to 2019.”