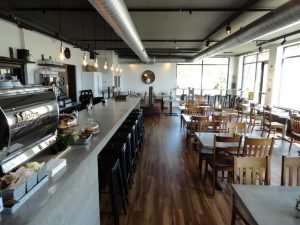 Brian Knox, owner of Bread & Butter, is someone who pursues his dreams. He spent years as a musician in the Amherst area – building relationships with local business owners, working in the restaurant industry on the side, and developing his “background dream” of owning his own restaurant someday. He and his wife Jaime came up with the idea for Bread & Butter; an upscale, local, organic restaurant that focuses on breakfast and lunch, and they’ve been going full steam ahead since opening five months ago.

Bread & Butter is part of The Mill District, a new development that is aiming to bring a commercial center to North Amherst and will soon house a second Atkins Farms location. Cinda Jones, leader of The Mill District project, was thrilled when Brian proposed his restaurant concept to her, and Brian was quickly able to move forward with building out the space. Integrity Builders was responsible for most of the construction and the family helped finish the interior details along with Kamil Peters and Mike Karmody of Brick Co. Workshop who helped with all of the tables, benches, shelves and bar and Rico Guttierez who put the floor in. Everything eventually came together by sourcing bits and pieces locally and refinishing the furniture to bring out the “soft industrial” look that Brian was going for.

Brian and Jaime decided to focus on breakfast and lunch so that they could balance the demands of the restaurant world with raising their nearly two-year-old daughter. Despite this attempt at balance, Brian works very full days, getting up at 4am to prepare the restaurant for the day. Alongside him at this early hour is Claire Maurey, former baker at Peoples’ Bakery and Hungry Ghost, who is well known locally for her amazing bread. “She came in to offer me a sample,” says Brian, “and with my mouth full of bread I immediately said ‘yes!’

Part of the demanding schedule is due to the fact that at Bread & Butter, nearly everything is made from scratch. They source their produce locally through Squash Trucking, Queen’s Greens, The Kitchen Garden, Book & Plow, Red Fire Farm and Jekanowski Farm. Sourcing eggs has been a challenge, as Brian has had difficulty finding a supplier whose scale and pricing matches up with the needs of his restaurant but he currently buys from Pete & Gerry’s Organic Eggs. Brian does what he can to support the local farms in this area. “Sourcing locally is too easy around here to not do it – all the farms are right here and the food is readily available.”

Brian’s vision for the Bread & Butter is ambitious. He wants to ramp up the local scene in the area by adding more local items to his menu and helping establish even stronger connections between food and his community by turning Bread & Butter into an established event space. Currently the restaurant hosts catered events at night, a writing seminar every Wednesday, and they’re planning to host many more events, including weddings and their own “breakfast for dinner” events this fall. Their space is available for meetings, musical events, rehearsal dinners, parties, and more. In a year, he’d love to be smoking his own meat on site and potentially adding a few bee hives behind the restaurant to sustainably collect their own honey. He has longer-term dreams of maybe opening a second location or a smaller café one day but for now, Brian is working on establishing himself and Bread & Butter in what he hopes becomes an alternative downtown Amherst hub.  As far as the menu goes, Brian is proud of everything they offer, but the Pork Belly is a “must try!” He loves seeing his customer’s reactions to it. The flavor is great and it’s a little something different. You don’t find pork belly everywhere but Bread & Butter is becoming known as the place to get it. At Bread & Butter the name says it all. It stands for the basics. It’s what we all need. And there’s simply nothing better than Bread & Butter.