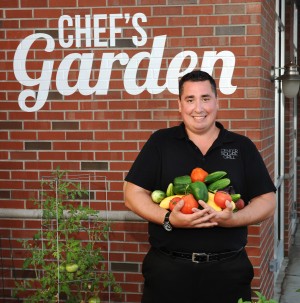 If you eat out at three different Local Hero Restaurants between now and September 30th, you can enter to win a chance to win a Center Square Grill wine-paired dinner for six!

Bill Collins, owner of Center Square Grill, grew up in the restaurant industry – his family owned a hotel and restaurant on Long Island. His career started there, progressed through management at a number of chains and corporate restaurants, and eventually landed him in western Massachusetts in the late 90s. Bill worked with Claudio Guerra on a seven-restaurant concept in the Valley and progressed through the ranks from server to Director of Operations. When the opportunity presented itself to branch out on his own and reinvent one of the restaurants in East Longmeadow, Bill jumped at the chance to see his vision of a creative American grill come to life. With the help of his new business partner Michael Sakey, Center Square Grill was born in 2014.

At Center Square Grill, you can find a rotating menu of seasonal specialties with locally sourced ingredients from the likes of Copperhead Farm, Garlic Farm, Equinox Farm, River Rock Farm and Swazlowski Potato Farm. Bill’s passion for local is simple: he’s interested in clean, delicious food, and quality ingredients simply speak for themselves. “There are great farms in the area at our fingertips, so why not use them?”

Every day is a new set of challenges and wins. Bill gets a thrill out of ‘wowing’ new visitors to the restaurant, and he takes tremendous pride in what he does. He’s involved in every aspect of the restaurant’s day to day function, from menu engineering to food production to presentation. “I take what I do very seriously,” says Bill.

Many times during our interview, Bill mentioned his exceptional team and the hard work they put in. The number one thing that Center Square Grill tries to communicate is that on every single level they care: cleanliness, happiness, enjoyment, great food and creating a special experience for every person that walks through the door. And the team that Bill has put together truly believes in this way of doing things.

The one thing Bill knows about his future in this business is that he’s not interested in opening more restaurants. Being in one location on a daily basis allows him to focus on the details in overseeing the Grill. It takes a lot to run a restaurant, but for Bill the work pays off. “I feel like the luckiest guy in the world,” says Bill when asked to summarize his relationship with his career. “I’m out to dinner six days a week. I’m a social guy so coming to work is not really working at all.”

This summer, get yourself to Center Square Grill and try the Lobster Parpadell with fresh lobster, heirloom tomatoes, grilled sweet corn, artichokes in butter and mint straight from the restaurant’s garden. And if you eat out at 3 participating restaurants between August 25th and September 30th you can enter to win a wine dinner for six at Center Square Grill! More details are available here.