I spoke to Keith Dufresne in early January, when post-solstice sun, lasting just a little bit longer in the day, was starting to make a change in daily rhythms—for myself, and for Keith. As the sky turned golden and then dark, I started by asking Keith how he ended up where he is now. “That’ll take at least forty-five minutes,” he said. It was incredible, though, how those minutes held the trials and joys of years, as Keith recounted the movement of the seasons and his family around the Pioneer Valley, revolving around maple syrup. 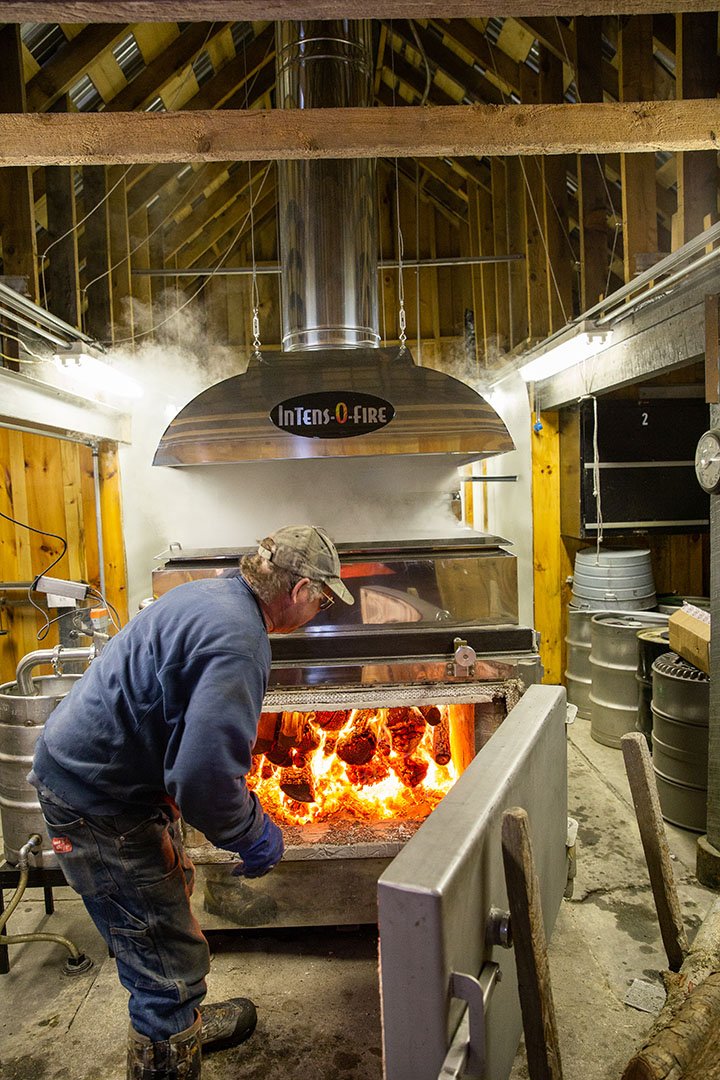 For four generations, starting with Keith’s great-grandfather Louis Dufresne, who emigrated from Quebec, the Dufresne family has been tapping trees, collecting sap, and boiling it down into syrup. In the early 80s, Keith took a walk on his property in Williamsburg and found himself surrounded by sugar maples. In 1983, he built a small sugarhouse up on a hillside. “I never worked so hard in my life,” Keith said of the first few years with his sugarhouse, “but it was awesome, beautiful syrup.” A few years later, determined to make life a bit easier, Keith put the sugarhouse on skids and towed it down the hill. Keith described the seasons flying by, as 1,100 taps grew to 10,000, with constant maintenance and technological advancements. There came a point, Keith said, when the sugarhouse was producing more syrup from 6,500 taps than 10,000, with the assistance of a vacuum system. Forty gallons of syrup produced per hour. Into the night, again and again, the sugarhouse has stayed awake, bubbling sap into syrup. “You walk out of the sugarhouse and see that orange ball crack the horizon and you say—here we go.” The cycle continues.

In all of this repletion, though, there has been such close attention. “After forty years, I can pretty much tell you about every year,” Keith tells me. “You live every year, every season.” Some years, Keith calls back to past seasons, imagining a repeat of ’89, ’00. It rarely happens as he expects, though—“Mother nature is in charge.” It’s alright though, he says, “I get bored easily.”

Some things stay the same—the sugarhouse still burns wood, and “syrup is still syrup.” What seems to also have stayed the same is that it’s difficult to fully understand the immense amount of work that goes into making maple syrup. The story Keith told me during our conversation was one of constant change, constant improvement, and constant care, living within the rhythms of season and syrup. As Keith said, he lived every season, and his pride for the syrup he produces is clear. Today, Dufresne’s Sugar House is one of the few syrup producers in the state to be Massachusetts Commonwealth Quality certified. Tucked away in the ‘About’ tab on the Dufresne’s website are testimonials of people across the country who have enjoyed Dufresne syrup—on pancakes, in baked goods, dinner dishes. Around the Pioneer Valley, Dufresne syrup can be found in several local beers, wines, and spirits. Contact Dufresne’s Sugar House for more information on where to find them. Someday soon, you may be able to enjoy their syrup in restaurants. You can also buy syrup, granulated maple sugar, block maple sugar, maple sugar candy, and maple cream directly from them online at berkshiremaple.com.

Every month or so, Keith and his wife Jacqueline post to a blog about the goings-on at the Sugar House. Every year, Keith says, he is sad to see the season end—whether it was a great year or a crummy year. Every year, the seasons continue, and syrup is syrup—and will be for a while.