“The best feeling for me, is getting a finished product— whether it be a peach, apricot, or
nectarine— that you’re proud of. It looks good, tastes good, and people are happy with
it. It’s a feeling of accomplishment,” says Colin Scott, owner/ operator of E&J Scott Orchards in Buckland.

E&J Scott Orchard was started in 1954 by Colin’s parents. Today the farm is 140 acres, with fifteen acres being used to grow apples, two acres for peaches, apricots, cherries, and nectarines, and the rest is used as pasture and hay land for their small herd of Irish-Dexter cattle.

Since its founding, E&J Scott Orchard has seen some significant changes. “Even just since the early 2,000s, the varieties of apples that people want have changed pretty drastically,” Colin explains. “When I was a kid, we grew a lot of what would today be considered a heritage breed, but used to just be commonplace. We didn’t have the same kind of refrigeration that we do today, so these were hardier apples that could be kept in a shed, for example the Northern Spy. Next, the McIntosh apples really came into popularity, and today its the Honeycrisp and Pink Lady varieties.

Growing over 30 varieties of apples, Colin begins harvesting the earliest varieties in late August, and will continue all the way through November. “We grow such a wide variety, so that we can evenly space it out throughout the season, which makes harvesting both steadier and more manageable,” Colin says. 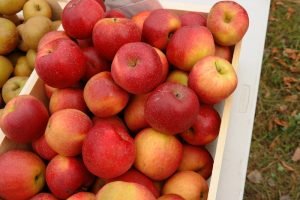 Once harvesting of the apples is done in the fall, there is work to be done packaging and
shipping out the apples to other farm stands and markets across the Valley. In winter, Colin trims the apple and peach trees, and spring and summer is spent fertilizing and mowing until harvest.

Colin explains that the apples don’t need much fertilizer, just a bit of lime to raise the pH of the soil and supplement the calcium and magnesium. The peaches receive nitrogen because the plant requires a lot of growth in order to fruit, and the blueberries require inputs to acidify the soil.

For Colin, the biggest challenge in growing apples has been the increasingly unpredictable seasons and weather patterns. Increasingly warm Februaries have caused fruit trees to sometimes start budding, just to be killed off by another cold front. “Once the buds are done, you’re done for the year,” Colin explains.

E&J Scott Orchard uses integrated pest management (IPM), a growing method that focuses on long term pest prevention through a combination of techniques, including protecting beneficial insect populations. Colin’s top priority has been helping native bee populations thrive in order to help pollinate his crops. He does this by using non-harmful sprays, and spraying early in the morning or late at night when the bees are less active. This has been so successful that over the past five years, he hasn’t had to bring beehives into the orchard because the native bee populations were plentiful. Colin says “I can’t imagine not using IPM. Both my father and my grandfather used IPM practices before it was IPM. It was just standard procedure to help reduce the amount of sprays we had to buy.”

In addition to growing fruit, E&J Scott Orchard raises grass-fed beef as well. They used to raise Herefords, but are slowly transitioning to Dexters, a breed that originated in Ireland. While they are a smaller animal, Dexters have a higher percentage of meat for their size, and they also make good milking cows. “Our herd is down to about two dozen, which is a decrease from our usual size. COVID-19 seems to have inspired new folks to be interested in keeping a family milking cow,” Colin remarks. He only sells whole animals to customers who are able to raise them for breeding stock, meat, or milk.

If you are interested in purchasing fruit or meat from E&J Scott Orchard, you can visit their farm stands in Ashfield, Goshen, and Buckland. You can also find their apples at other local farm stands such as Atherton’s and Red Fire Farm, or at stores such as the Williamsburg Market.