Alan Sanderson Jr.’s father was a farmer. So was his grandfather. His great-grandfather too. On a recent windy afternoon Alan leaned back in his office chair at Fairview Farms Inc. and explained to me that his family has been in farming for centuries. “The first Sanderson that farmed goes back to the 1600s.” For many of those centuries the Sandersons made their living running a small dairy farm but big changes have happened to the farm throughout Alan’s life. 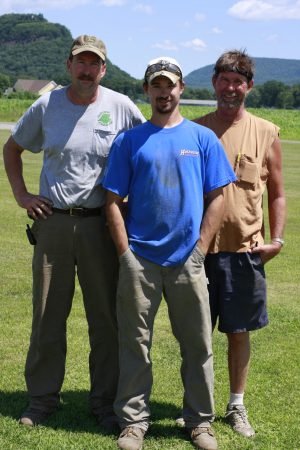 The Sandersons: Brad, Jake, and Alan

Alan loved growing up on the family dairy farm, but he was still a kid when his father and uncle made the tough decision to sell off the herd in 1970. The two thought they would take a stab at life off the farm, but it didn’t last long. Fourteen years later a patch of land in Whately came up for sale so the family pooled their resources together and jumped on the opportunity. Alan was just out of college and trying his hand at an office job “pushing a pencil around.” A month at the desk was enough for him – it was time to get his hands dirty again. The modern Fairview Farms was born.

Those first few years on the new farm were filled with experimentation. The family tried out pumpkins, corn, broccoli, squash, and more but as time went on, broadleaf tobacco began to emerge as their favored crop. Alan pointed out that the climate here in the Pioneer Valley – our hot, humid summers combined with plenty of rainfall and a cold winter – is perfect for growing broadleaf tobacco. Tobacco grown in the Connecticut River Valley has gained international notoriety as the gold standard for cigar wrappers. As Alan puts it, “They have tried all over the world to duplicate Connecticut Valley tobacco and they can’t.” Great conditions combined with booming prices drew the Sandersons into the tobacco business and by the early 2000s, the family was planting over 120 acres of broadleaf tobacco every year.

In 2010, Fairview Farms changed forever when the tobacco crisis descended upon the Valley. Alan recalled that the season had been like any other. In the spring, his distributor had given him an informal estimate at how much tobacco he thought he’d be able to buy in the autumn. Based on that projection, Alan and the team planted over 120 acres of tobacco and a healthy crop sprouted up in his fields across Whately. By early September his crew of over 70 employees had hung tons of tobacco to dry in dozens of rented barns across the county. It was only then that he learned that the international cigar company that usually bought his tobacco by the truckload was spooked by the uncertain economy in the wake of the 2008 Great Recession. The cigar company didn’t want to risk carrying a large inventory and they had decided not to buy any fresh tobacco for the year. Alan scrambled to find another buyer but soon realized that the other major cigar makers were closing their doors too. Alan was forced to accept a bottom of the barrel price for his crop and took a devastating loss. Across the Valley tobacco farmers took massive hits. As Alan explained, “Everyone lost a lot of money that year and for the next few years nobody grew tobacco.” 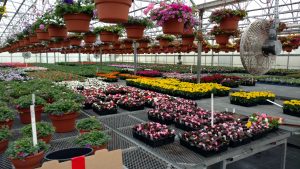 The crisis made it clear to the Sandersons that growing  tobacco exclusively was too much of a gamble. Over the following years, Fairview Farms stopped renting the tobacco barns and started building greenhouses. Instead of tobacco, they would grow flowers. Today, Fairview Farm sports 50 greenhouses and come spring, they’re overflowing with wave petunias, calibrachoa, lobelia, scaevola, geraniums, mums, and so much more. The farm sells thousands of hanging baskets and potted flowers to garden centers and grocery stores across the Valley. You can find their flowers at Ciesluk Farmstand, Golonka Farmstand, Atkins Market, Whole Foods, and many more. Since they only sell wholesale, Fairview Farms doesn’t put branded labels on their flowers – odds are you might have bought flowers that got their start at Fairview Farms and didn’t even know it!

While flowers are their biggest focus, the Sandersons aren’t ones to take the cold season completely off. During my visit, Alan and I drove through a dusting of snow over to their heated greenhouses. It was incredible to step in from the brisk winter air to a greenhouse filled floor to ceiling with lush tomatoes ripening on the vine. Their winter tomato crop will be going strong through January and believe it or not, you can find a fresh, vine ripened tomato straight from Fairview Farm in January at River Valley Coop, Big Y, The Millstone, and many other stores across the Valley. 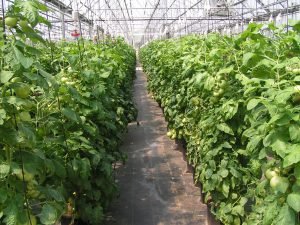 Along with his brother Brad and his son Jake, Alan is constantly looking to incorporate new and innovative methods to the farm. For example, in an effort to take on a pesky aphid invasion, Alan stumbled across the idea to release parasitic wasps into the greenhouses. “The wasps are great,” he declared, “all they do is fly around and eat aphids!” Discovering the parasitic wasps opened Alan’s eyes to the world of beneficial insects – a method he now swears by. Fairview Farms uses a whole host of beneficial insects to tackle pests like fungus gnats and shore flies plus their four hives of bumblebees do a great job with pollination. The beneficial insects are so effective that Alan doesn’t spray any insecticides. He’s glad to cut down on his chemical use because over the years he’s seen that pests have begun to build up resistance to many insecticides. “We don’t want to create a super bug. If there’s something in nature that will control what we have, that’s what we’re going to use.”

Fairview Farms has gone through countless changes over the years but throughout that time the Sanderson family has stuck together in the business. “Working with my dad and my brother has been really rewarding. It’s satisfying that we’ve been able to work together because in a lot of families you don’t see that. With us, sure we have our problems and we might yell at each other but half an hour later we’ll be back to working on something new together. That’s family and it works.” Alan is proud of that family legacy. As he’s seen his son Jake, the 9th generation of farming Sandersons, take a larger role in the farm over recent years, he’s hopeful that the legacy will live on for years to come. “It’s been great seeing my son coming in. He’s been on the farm driving tractors since he was four years old so he’s seen the whole progression of the business. I think he will be next generation and hopefully his kids will follow after him.”