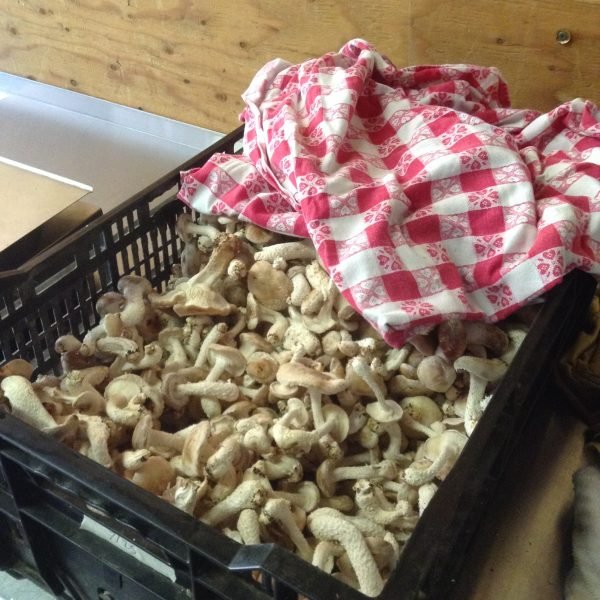 Fungi Ally is located on route 47 in Hadley, close to the Sunderland town line. You’d never guess by looking at the unassuming exterior, but the inside is packed with mushrooms at various stages of cultivation. A fruiting room holds rows of shelves, with the bags in different stages of fruiting: beautiful blue oysters, shiitakes, and lion’s mane mushrooms all emerging from the blocks. There is also a room in back, the lab, where bags are inoculated (and which I didn’t enter, because it needs to be a sterile environment).

I sat down to talk to Willie Crosby, the owner of Fungi Ally. He’s a young guy, 27 years old, who got his start in agriculture working on the UMass Student Farm. His interest in growing mushrooms started back when he worked at Simple Gifts Farm in Amherst, tending to the farm’s mushroom logs. After three years at various farms, he realized that while he respected the dedication and time it takes to grow good vegetables, it wasn’t what he ultimately wanted to do.  Mushrooms, he felt, were underutilized in local agriculture, and there was a niche to be filled.

He points to the incredible, necessary role mushrooms have in the life cycle of all living organisms, and how they remind us that death isn’t the end, but part of a cycle of life and death that continues infinitely. He sees the connection between the mushrooms and their role in the forest and our environment and hopes that humans can understand and foster connections like this as well.

Willie started Fungi Ally in 2013 in North Amherst with two business partners. The business was spread out among 4 different locations, which meant he spent a lot of time driving from one place to the other and transporting materials around. In September of 2015 the business relocated to its current space in Hadley, where everything can happen under one roof. Willie now runs the business on his own, and has upped production from 100 to 400 pounds per week, with an eventual goal of producing up to 1000 pounds weekly.

He eventually hopes to buy a farm, where he could ramp up production this year to 2,000 bags a week. He also mentioned an interesting idea: eventually providing trailers to house ready-to-go mushroom blocks, which could be produced anywhere there is a little extra space.

As it stands now, Fungi Ally is a complex business with a number of components. The first is, of course, selling fresh edible mushrooms locally through CSAs, to wholesale outlets like coops, institutions like UMass Amherst, and restaurants, and at farmers’ markets (where they can now offer a rebate on mushrooms for SNAP customers through the Healthy Incentives Program). They also sell tinctures and extracts of medicinal mushrooms. Another facet of the company is spawn production, which they sell online as grow kits to hobby growers. They also produce blocks that larger farms in states like Pennsylvania, New York, Connecticut and Massachusetts use to grow their own mushrooms, and these sales account for 30-40% of the business. This allows Willie to take distribution nationally, whereas selling the fresh mushrooms is a more local endeavor.

The last, and perhaps most important, arm of the business is education. Willie teaches a class at UMass Amherst, both in person and online, and holds workshops for individuals and farm owners. Through teaching about mushroom cultivation and helping small farms develop their business, Willie aims to promote mushroom production and build community.

Willie enjoys participating in the robust community around food here, which has a wide depth and breadth, and seeing the way it manifests in everything from large commercial farms to smaller farms and specialty products. His business is just another way that the community is enriched by a local product that is not offered in many local food systems and that the Valley is lucky to have.

For Willie, it can be a challenge to balance his work and life, and to balance the business’s growth with its values. It can be difficult finding new customers, and producing more mushrooms but not too many. Fall is an especially busy time, with his commitment to teaching at UMass and participating in various festivals, as well as selling his products at farmers markets and various other outlets. The difficulty is rewarded by growth, which takes many forms: the growth of his business, of people’s interest in mycology, his own growth through balancing it all, and of course the growth of the mushrooms themselves. 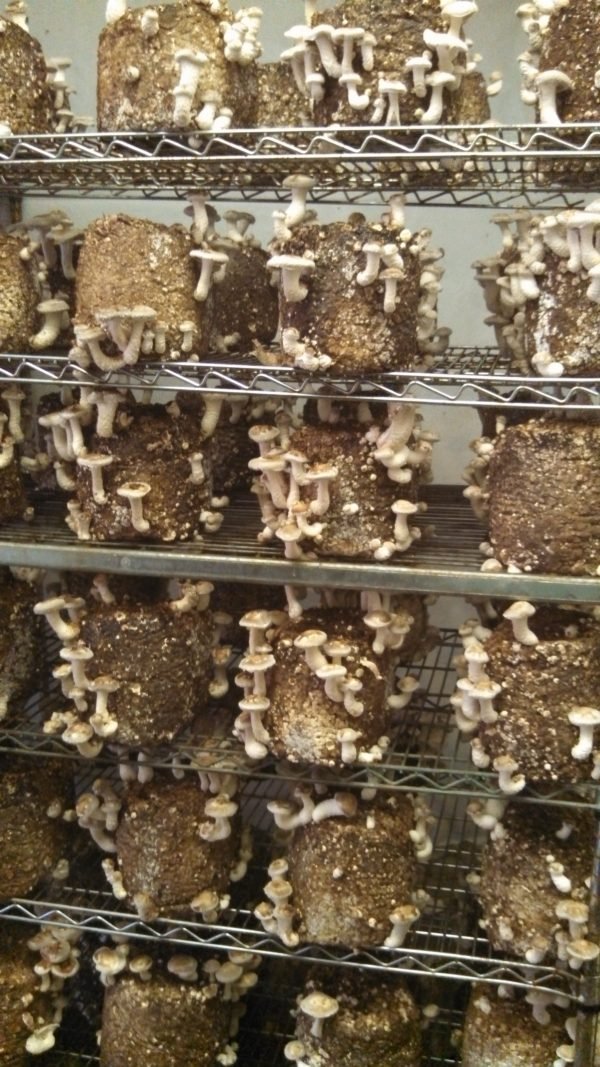 He uses local sawdust, soybean hulls, and wheat bran to grow his mushrooms, the last of which lends the smell of a bakery to his entire warehouse. The mushroom-growing process starts by taking the sawdust and adding either the wheat bran or soybean hulls, depending on the type of mushroom being grown. The mixture is moistened and bagged into 5-6 lb plastic bags with a special air filter attached. Then 170-200 bags are then loaded into a modified cattle trough and sterilized with steam for 24 hours. The bags are moved into the lab, where spawn grown on millet is added and the bags are sealed. Then comes incubation time, when the mycelium start to grow throughout the bag, which takes 12 to 60 days, depending on the species of mushroom.  When the mycelium has spread throughout the bag, they are moved to the fruiting room, where mushrooms emerge and are harvested for sale.

I feel like I have some misconceptions about mushrooms myself, so I asked Willie some questions about foraging. He said many people think all mushrooms are poisonous, when in fact there are over 1,000 species of edible mushrooms. He said there is no blanket identifying feature of poisonous mushrooms, and that there are lots of resources available for people looking to learn more. He suggested going to a class or connecting with the Pioneer Valley Mycological Association, which goes on forays (looking for and identifying mushrooms in the wild) and has a Facebook group. He also suggested interacting with mushrooms more; looking at them, consuming them, and learning about them.

If you want to participate in a local event held by Fungi Ally, there is a workshop coming up on Saturday, October 28th for backyard mushroom growers. There will be information on log inoculation, growing mushrooms in woodchip beds and in straw. It runs from 10:30 to 12:30 and costs $30. Visit fungially.com for more information and to sign up.