“I like being the best at what I do and I always like a challenge,” says Gary Gemme of Harvest Farm in Whatley. It’s clear that Gary takes a lot of pride in his work. He offers to take me for a ride around the farm in his truck, pointing out what’s growing where and talking about the relationships he’s cultivated during his 41 years of farming. Gary answers the question of what he likes best about farming with a simple response: “what’s not to love?”

Gary got into farming as a fluke; he went to college for wildlife management but struggled to find a job in his field, so he started growing produce and selling it roadside in Chicopee. Eventually, he got a few job offers, but by then he’d gotten a taste of the independence that came with being his own boss and decided to keep farming. Gary teamed up with David Wojciechowski to start Harvest Farm on rented land in Hadley in 1974, and in 1979 they purchased land in Whatley and moved the farm to its current home.

Harvest Farm is comprised of 100+ acres of vegetable fields, 60 acres of cover crop seed like rye and oats, and about one acre of greenhouses. The main crops include kale, collards and tomatoes as well as a few specialty crops like spearmint and Brazilian eggplants called Jilos. Produce is sold wholesale to larger farm stands and supermarket chains across New England. The farm’s 15 greenhouses, which are managed by Dave, are where pre order vegetable starts are grown for farms from the Hudson to the Atlantic. They also grow flowers for garden centers all over the northeast.

Since Harvest Farm focuses on just a few crops, it takes careful management to maintain soil health. They have arrangements with neighboring farmers so they can rotate different crops on their land and they plant oat and rye cover crops on the fields in between plantings. One of the special things about the soil in this area is that it has a really nice base for holding moisture without being too wet. This results in what Gary considers the highest quality produce, grown on fields with 2,000 feet of frontage to the Connecticut River. To prove it, Gary pulled out his phone to show me a text he received from a buyer in the middle of a kale transaction who touted that Harvest Farm’s kale is the best in the whole country, and that he would know because he buys it from everywhere — including California. 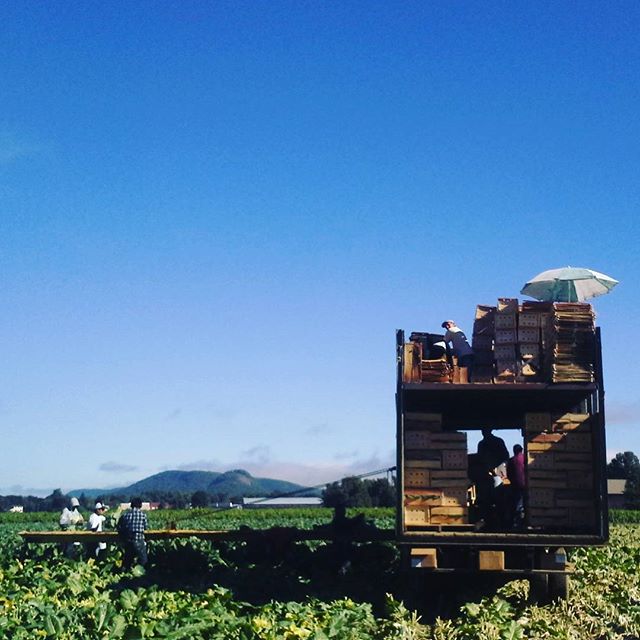 As many farmers would say, making money is the hardest thing; most of the money is spent on infrastructure and supplies. But Gary has managed to save a lot by inventing and building much of his own machinery. He showed me the Hydrocellar; a roofed platform with a grated floor that fills up with well water and cools the produce down. This is something he designed and built himself for about $12,000 after being quoted $300,000 on a similar design. Another invention of Gary’s is called the Harvest Aid; a double decker platform truck that slowly rolls through the field as workers cut collards and send them up a conveyer belt to be packed into crates by a worker on top.

Gary’s long-term goal is to ramp up business with the help of his son Eric, who plans to come back to the farm within the next few years. Gary knows that Eric is going to be a huge asset to the long-term viability of the farm: he’s gained valuable skills in his current job assessing production efficiency. “Eric is a great creative and strategic thinker and an even better inventor than his father,” says Gary.

Gary seems hopeful for the future of his farm. That’s due not only to Eric’s involvement, but also the dedication of his amazing team of workers, some of whom have been there for a long time — like Andre, who is on his 32nd year at Harvest Farm. “My crew really stepped up to move the business forward in recent years,” Gary admits. “I couldn’t have done it without this level of hard work and loyalty.”