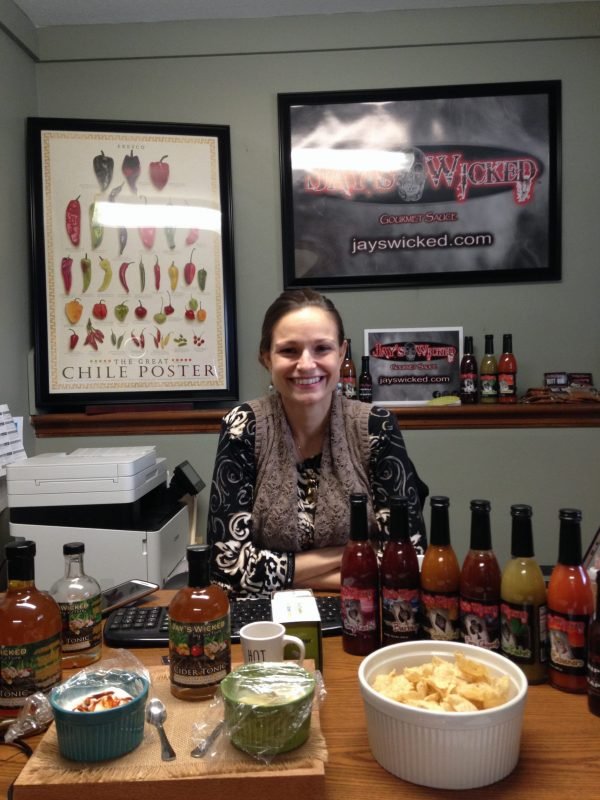 Shannon Green found out that her husband Jason was a sauce fanatic early on in their relationship. On a recent morning, sitting in front of a massive skull-covered Jay’s Wicked Gourmet Sauce poster, Shannon explained, “Back before we were married, I looked in his fridge. He’s a chef and you’d think there would be all this food, but it was full of condiments!”

Shannon soon learned that many of the sauces stuffing Jason’s fridge were freshly concocted experiments. Jason has a passion for invention, and his drive to tinker with things, combined with his love of food, brought a steady stream of delicious concoctions through the couple’s kitchen. One of those early creations was an original barbeque sauce—it was a hit with their friends, and Jason began serving it up on ‘Crazy Jay Burgers’ at Mary Lane Hospital, where he works as the chef. Word about the new sauce spread quickly, and soon people were walking into the Hospital asking for bottles of barbeque. Shannon, with her entrepreneurial instinct, sensed an opportunity. “People liked it so much that they wanted bottles of the sauce – I said we should start doing something with this!” The idea for Jay’s Wicked Gourmet Sauce was born.

Once Shannon and Jason decided to take the plunge and start a new business, they began a year-long sprint to perfect their recipes, track down suppliers, and produce a whole bunch of sauce. After many tough months of figuring out how to make a home-made sauce on a commercial scale, Shannon and Jason were proud to unveil their brand-new line of Jay’s Wicked Gourmet Sauces in the summer of 2016. The couple quickly hit the road, tabling at events throughout the state to spread the word about Jay’s Wicked. With a young child in tow and day jobs on the side, Jason and Shannon were constantly on the move, but the hustle paid off. Shannon was thrilled when she realized for the first time that customers were beginning to seek them out at events. “By the second year, people were expecting us to be places. That was the first, ‘Woah, this is working!’”

Shannon and Jason aim for a high level of quality. Shannon explained, “I don’t like the fillers, I don’t like anything fake in my product.” She picked up a bottle of their Honey RazBQ sauce and began ticking off the ingredients on the label. “Look – there’s tomato paste, raspberries, vinegar, some sugar, honey… it’s all real things. It’s not some word that you can’t pronounce.” For the couple, a keystone of producing a high-quality product also means sourcing their ingredients locally. They buy in peppers from Hubbard’s Dry Brook Farm and Kitchen Garden Farm in Sunderland, vinegar from Apex Orchards in Shelburne Falls, Ginger from Old Friends Farm in Amherst, and are always looking to establish new relationships with their farmer neighbors. 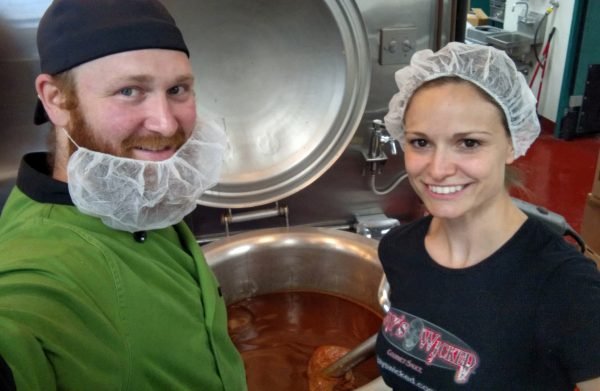 The Jay’s Wicked logo may be covered in skulls, but don’t let that scare you off—they have a sauce for everyone. For those who prefer a milder taste, go for the original Barbeque sauce or Spicy Gold, a mustard-based barbeque sauce, which Shannon points out is great for glazing a ham or on roasted broccoli. The Honey RazBQ sauce (with real honey and real raspberries) is all sweet and no heat. “It’s for the people who thought the original barbeque was too hot,” Shannon told me with a laugh.

Of course, Jay’s Wicked has sauces for folks who appreciate spicy, too. Green Rocket is made with jalapeños (a delicious addition to your morning eggs and potatoes, says Shannon) and Fiery Chipotle can bring a deep, smoky flavor to tacos or a chipotle mayo. For you heat lovers, mix the Jay’s Wicked Habanero with maple syrup for a glaze on your next salmon. Or if the Habanero isn’t hot enough, go for the Triple Black Reaper: black cherries, black garlic, black tea, and the infamous Carolina Reaper pepper. But, as Shannon points out, Jay’s Wicked isn’t about just blasting your socks off. “We focus on the flavor of the peppers rather than just intense heat. A lot of hot sauces you eat them and then you don’t taste your food because your taste buds are blown – that’s not us.” 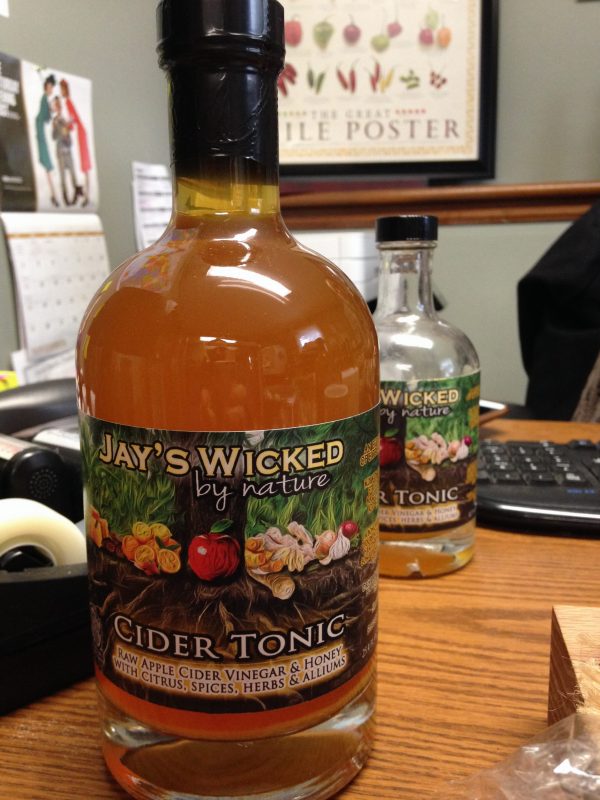 With a full line of seven sauces, you might expect Jason and Shannon to have their hands full, but the couple is constantly working to create new products. For the past few years, Shannon and Jason have been making a cider tonic for family and friends; encouraged by a positive community response, the two took the leap outside of the sauce world with the official release Jay’s Wicked by Nature Cider Tonic this past November. Shannon told me that she loves to use the tonic in salad dressing, in tea, or to drink it straight up as a healthful supplement. The product is packed with nutritious foods including raw apple cider vinegar, ginger, horseradish, honey, black peppercorns, turmeric, rose hips, and chocolate habaneros. Completing a bio-regional herbalism apprenticeship encouraged Shannon’s drive to produce something that would be packed with nutrients while also tasting delicious. Shannon considers herself a naturalist and hopes to continue developing more herbalism-focused products down the road.

Shannon and Jason are in their third year of Jay’s Wicked, and they have come a long way from that refrigerator full of condiments. These days, you can find their products in Fresh Acres, Table and Vine, Big Y’s in Hampden County, Arnold’s Meats, Rice’s Fruit Farm, Atkins, and on their website. It has been a tough road so far, filled with early mornings and late nights, but Shannon is inspired to keep forging ahead by the comradery she has made with the thriving food community in the Valley. “Everyone is in the same boat. Other businesses, farmers, we’re all small business owners and we all have similar struggles. You think you’re going to be a competitor with somebody but you meet at an event and there’s a great value in talking to each other. Learning from each other has been so rewarding.”