I visited Many Hands Farm Corps in November, just after the first frost of winter. I found Ryan, the general manager, hard at work cutting wood with a chainsaw in one of the farm’s greenhouses. As we began our walk around the farms’ ten acres, Ryan explained to me that though he is the general manager, his title really changes day to day depending on what needs to be done. Many Hands Farm Corps is a year-round CSA farm with a strong emphasis on the community it serves. As we walk along the two-track dirt road that winds through the farm, Ryan tells me that the farm’s goals have changed somewhat since its founding, ten years ago. It started as a CSA farm with an internship program designed to address the short-term labor needs of area farms during the summer season. Education continues to be part of the farm’s mission, Ryan says, but the farm has moved toward “trying to have a bigger impact on a smaller community,” rather than focusing that impact on the larger farm community. 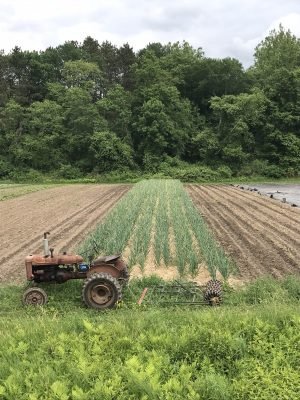 A large part of the farm’s intended impact is increased access to local food. “Maybe one percent of the country eats locally, up to ten percent in this area. I’d like to expand that number,” Ryan says. He explains further, in that eating locally means not only providing CSA members with a large percentage of local food, but also providing them with access to local food throughout the year. The farm offers year-round CSA shares in summer/fall, winter, and spring.

Wild foods add a unique aspect to their movement to increase access to local food: education. CSA shares include wild local plants like sea buckthorn and edible linden—“a bunch of things I’d never heard of before being on this land,” Ryan says. “I’m trying to include them in the CSA to teach people, so they can pick them for themselves.” They also grow perennials like currants, gooseberries, and grapes, and plan to expand next season. Ryan shows me a field that will soon be filled with apple, hazelnut, and cherry trees.

Another goal they have is to grow food in the most sustainable and ecologically friendly ways. The farm does not spray any pesticides, and tills as little as possible. The farm also uses cover crops to protect the soil. Different cover crops can assist with nitrogen fixing, adding organic matter, retaining nutrients, and reducing tillage. The farm is process oriented and cuts no corners to save time—some fields stay in cover crop for full seasons or years. Ryan says he is always willing to experiment with new techniques. He shares a vision of incorporating silvopasture into the farm system, a type of farming that includes livestock, trees, and forage plants.

Though it is mostly empty on this Friday morning, visions of life float around the farm. Soon, the fields 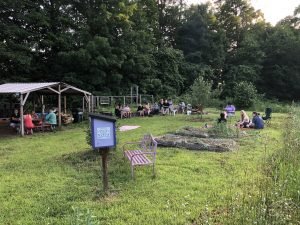 near the farm’s entrance will be filled with pick-your-own cherry tomatoes, paste tomatoes, strawberries, and flowers. During the growing season and throughout the rest of the year, Many Hands Farm Corps is open to community members 24/7. “It’s not my farm,” Ryan says, “it’s a community farm.” He encourages community members to treat the farm like a public park. A couple hundred feet from the pick-your-own fields, there is a Little Free Library, painted purple. A bench sits next to it and picnic tables are nearby, sheltered under an awning. There is also a small stage, framed by two-by-fours and an assortment of reclaimed windows. The CSA shed, where shares are distributed, is also nearby. The shed is cozy and welcoming—it fits the nature of the farm. A sippy cup and a couple kids’ toys are scattered around the now-empty shed, evidence of community presence. In the summer, Ryan plans to sell transplants out of the shed so that community members can grow food in their own backyards.

In this space, not larger than a soccer field, local bands play, families come together for potluck dinners, and birthday parties are held. “My favorite thing is just having people come here and use the space in a more organic way,” Ryan says. The farm also hosts events for CSA members throughout the year, like a pre-Thanksgiving potluck and an end-of-season pancake breakfast. The first pancake breakfast on the farm was last March, organized to mark the end of the winter CSA share, and, in true Many Hands fashion, to celebrate another ultra-local food—maple syrup from the sugar maples surrounding the farm. Ryan hopes to make it a yearly tradition. “I don’t think of myself as selling products to people so much as giving them an experience, an opportunity to be involved,” Ryan tells me. “It’s like a sports team, they’re signing on to root for us, and hopefully we’re a little bit entertaining as well—and the vegetables are kind of an add on.” 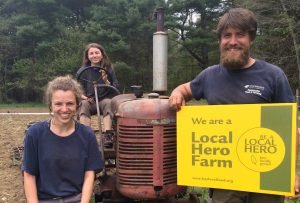 Part of this community “sports team” are the employees of Many Hands Farm Corps. Ryan emphasizes to me the importance of everyone on the team. He upholds a $15 minimum wage for all of the farm’s employees and is willing to share his knowledge with people of all skill and experience levels who join the team.

Throughout all aspects of this operation is a thread of sustainability. The stage and awning, along with the CSA shed and even the greenhouses, were all built by Ryan and Many Hands Farm Corps employees, and, as Ryan says, “the wood is as local as the vegetables.” Ryan cut trees from nearby woods, and hand hewed the timbers. Additional boards came from his landlord’s property. Ryan learned how to hew wood to build the shed. He did work for another local farmer in exchange for use of a workspace while he learned. Cost-conserving practices like these allow Many Hands Farm Corps to direct resources toward reaching a broader segment of the population.

Before our tour ends, and Ryan goes back to cutting wood for the greenhouse he’s building, he tells me about some of the food justice initiatives they are taking on. Along with bringing extra produce to the Amherst Survival Center, they are working toward partnering with Healthy Hampshire, a food justice organization. Healthy Hampshire organizes mobile farmers’ markets, bringing fresh produce to residents of Hampshire County who have limited resources. They also offer discounted CSA shares to community members using SNAP and HIP benefits. 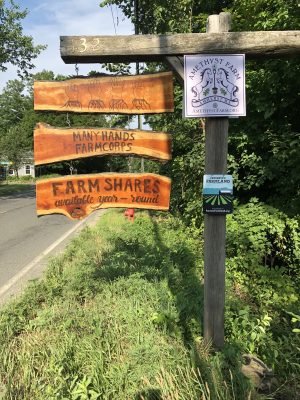 Initiatives like this make it clear that the focus and impacts of Many Hands Farm Corps are truly and thoroughly local, and that the goals of the farm reach past a narrow vision of sustainability toward one that benefits environmental and human communities as one. Leaving the farm, I was filled with a renewed sense of optimism in the power of good, local food, community leaders, and community action.

You can see for yourself the work Many Hands Farm Corps is doing by stopping by the farm at 132 Pelham Road in Amherst. Ryan plans to open a farm stand at the farm this summer. CSA shares for summer/fall, winter, and spring are available on the farm’s website, sign up today www.manyhandsfarmcorps.com (they do fill up fast!).