Mayval Farm in Westhampton sits comfortably between two worlds in the dairy industry. Their 100 cows produce around 256,000 gallons of milk per year (that’s 2.2 million pounds!), and the vast majority of it goes to the Agri-Mark Dairy Cooperative to be turned into Cabot and McAdam cheeses, butter, and more. And with the addition of their on-farm creamery in 2015, Mayval Farm has begun to carve out a niche selling their own cream-top milk, fromage blanc, cheese curds, and skyr (not sure what that is? Read on!) directly to their community. 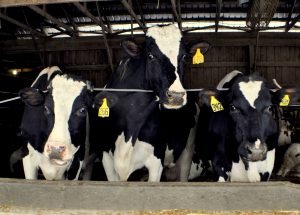 Mayval Farm’s multi-faceted business highlights the interesting position of dairy farms in our local food system: the 142 dairy farms represent less than 2% of all the farms in the state, but they produce an astounding 20% of the milk consumed in Massachusetts and steward close to 10% of the agricultural land. But because the vast majority of their milk is processed cooperatively and sold to the public under the Hood, Cabot, or Garelick (to name just a few!) brand names, the individual farms are mostly invisible to the public. The few local dairy farms with familiar names are those who are bottling their own milk or making cheese, yogurt, or other dairy products – they are visible, but they represent only a tiny sliver of the dairy industry in our state. Mayval Farm is currently managing their herd for wholesale and their small-scale, direct-to-consumer brand.

Mayval Farm’s land has been in agriculture since 1778, but the current farm structure began to take shape in the early 1970s, when Margie and Henry Parsons returned to Henry’s family farm and started to expand the dairy herd. Henry and his brother Ed officially took over the farm in 1991, and they’ve had around 100 cows ever since. They also produce beef, eggs, and maple syrup – 1500 taps this past year, and they still exclusively use buckets to collect the sap!

Around 2010, the family began talking about next steps for the farm. Margie was about to retire from her off-farm job, and her daughter Kate was interested in getting more involved in the farm in addition to her own work. They began to research options for processing equipment, and to think about unique products they could offer. “You really need to offer a variety of products,” says Margie, “in order to draw people to your table at a farmers’ market or to your farm stand.” Kate’s brother Ethan and his wife Rachel, who live in Somerville, got involved in the planning too and put their skills towards applying for a grant.

In 2013, Mayval Farm received a Farm Viability Grant from the state and began construction of their creamery. Their 45-gallon pasteurization tank enables them to sell pasteurized milk and fresh cheeses (raw milk cheese must be aged to be sold legally in Massachusetts). They make cheese curds because that was always the first treat the family went for at the Big E, and they settled on fromage blanc and skyr as the result of extensive research and learning from other dairies. Skyr is an Icelandic cultured dairy product which Margie describes as “similar to strained yogurt, but sweeter.” They make a variety of flavors and offer a lot of samples to introduce customers to skyr. “The most common word we hear at farmers’ markets is, ‘wow!’” says Margie.

While the creamery is currently run by Margie and Kate, with Ed and Henry managing milk, beef, and maple production, the family hopes that the business can expand enough to support more members of the next generation – Ethan and Rachel, and Ed’s son Clint, have expressed an interest in coming back to the farm. This might include expanding their offerings — they have a cheese aging room built into the creamery, but Margie says that they have only just begun to experiment with aged cheeses. For now, they’re working on expanding sales of their milk and fresh cheeses, and they’re grateful for the wholesale market for their milk, which still provides most of the farm’s income. You can find their creamery-made products at Atkins Farms, River Valley Coop, Outlook Farm, and the Mayval Farm Creamery in Westhampton. They are also regulars at the Northampton Saturday Farmers’ Market and the Westfield Farmers’ Market.