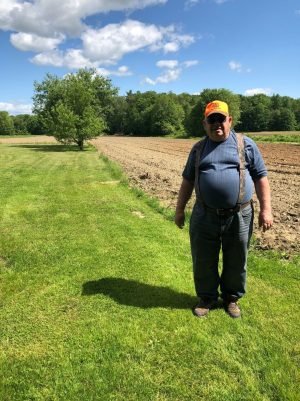 As I drove down the streets of Hatfield on a sunny summer morning, I noticed farm stand after farm stand out in front of various houses. Even though I was only minutes from the center of town, the side roads were peaceful and secluded. I pulled up to Pop’s Farm and took note of a small farm stand advertising asparagus out front.

Right from the start I could tell Pop’s was a small family farm. Behind the shaded brick house sat a small field of crops along with a classic apple tree perfect for climbing. Maze, also known as Mazy, is a thirteen-year-old golden retriever that spends most of her time out in the sun. She curled up at my feet as I sat down with Tom Petcen to learn more about Pop’s Farm.

Tom has always had farming in his family. “We have been farming all our lives,” he said. The farm was passed to Tom from his father, which had been passed through previous generations of the family. One of Tom’s sons lives right across the street in the original farm house on the property. His son has taken over the majority of the farm labor in the recent years. Most of Tom’s family lives in Hatfield, which has allowed Pop’s Farm to continue it’s legacy as a family-run business. The farm is about 10-12 acres. However, in recent years they have had to downsize due to the farm stand competition from the neighboring farms.

Pop’s Farm has one of the oldest farms stands in Hatfield that remains open to this day. Tom emphasized that the three most important things about having a farm stand are “location, location, and location.” Due to the fact that the farm is not on the main road, the Pop’s farm stand location is not always known to the public. Tom spoke of the importance of producing a good product, so the quality of the farm is advertised via word of mouth. “We have always had good products to sell.”

Pop’s Farm specializes in Indian corn, different varieties of squash, ornamentals, gladiolus, and sunflowers. In fact, Tom insisted that his dog be named “corn dog.” His wife opposed, and they ended up agreeing on Mazy to still incorporate corn into the name. The general farming philosophy of Pop’s Farm is to rely on nature. Since there is no way for the farm to predict the forecast more than a week in advance, they mostly go with the flow from season to season and hope for the best. Tom touched on how grateful he is to live in the area where the weather is not as extreme as other regions of the United States. 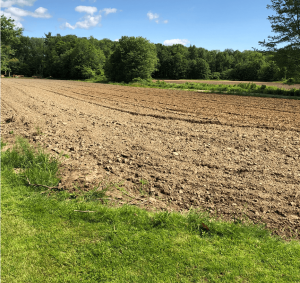 In addition to letting nature take the lead on the farm, Pop’s Farm uses herbicides and pesticides to prevent damage to the crops. Other methods would be too expensive due to the upkeep and extra hiring. The Farm bases the dosages off of what is recommended by the manufacturer. The other farms nearby are a pretty good mix of organic and non-organic.

Aside from the local farm stand, Pop’s Farm sells wholesale squash and Indian corn locally and in Connecticut. While Hatfield is heavily populated with farms, Pop’s stands out in that it is family run and has a small-scale production. Tom believes one of the greatest rewards of farming is being able to watch plants grow. While some may not have that kind of patience, Tom finds joy in developing a product from a seed.

Like many farmers, Tom agreed some of the biggest challenges are getting everything done that needs to be done. Today, farming has become more mechanical which has allowed for more progress on the farm. While more work is able to get done with new technology, plant disease has become more prevalent. For example, tomato blight is a plant disease that attacks the plants’ foliage.

When Tom is not farming, he enjoys hunting, fishing, and most importantly, spending time with family. For the future, Pop’s Farm wants to continue making quality products for the community.