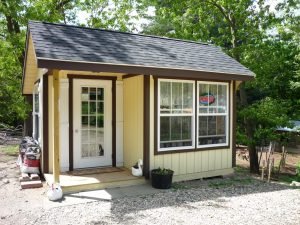 Gabriella Steria got her first goat, Crystal, when she was fourteen. A feisty brown and white Toggenburg, Crystal stood out against the cows on the Steria family’s dairy farm, but that didn’t stop her from bossing the heifers around or sleeping with them at night. “I think she thought she was a cow,” Gabriella says, laughing. Although Crystal started out as a pet, Gabriella soon developed a small business around her, selling her milk to neighbors and discovering how much she enjoyed both goats and entrepreneurship in the process.

Today, Gabriella single-handedly owns and runs Stony Creek Farm in Montgomery, MA, which she founded in 2000. Her goat herd has expanded to over 100, and has been joined by a brood of laying hens. Blueberry, blackberry, and raspberry bushes sprawl across the front of her land, and apple and cherry trees bloomed for the first time this year. From her goats, Gabriella sells raw milk, chevre and feta cheese (the chive and onion is her favorite, but the cranberry pecan flies off the shelf fastest), and, as of last year, fresh goat meat, particularly favored by immigrant communities in her town. She sells all this and more in the cozy store she opened at the farm in 2014.

This morning, as on all mornings, it’s time to feed the kids. Gabriella heads into the barn amid a chorus of excited bleats and places a large bucket of milk in the first stall of youngsters. Rubber teats stick out around the bucket rim and the goats instantly latch on, sucking and jostling, wagging their tails. Thirty-five kids were born in February, and another eighteen in in April. Staggering the birth of kids ensures the presence of a sizeable group of milking does throughout the year, although the members within that group shift based on individual milking cycles. Most mothers milk for ten months and rest for two as they near the end of their latest pregnancy, although it’s not a hard and fast rule. “If they need to rest sooner, I let them rest,” Gabriella says. “And on the other hand, I had one goat that milked for a whole year straight through.”

Gabriella’s herd is made up of a mixture of four breeds; Alpine, Saanen, Nubian, and La Mancha. She recently had the butter fat content of the milk from each animal tested, and decided that the La Manchas are the best. “I don’t think people realize how healthy goat milk is,” Gabriella says. She has customers who drink it not only for its taste, but also to overcome food allergies, soothe bad reactions to antibiotics, and as a replacement for baby formula. She herself has used it to reduce joint inflammation from Lyme disease. 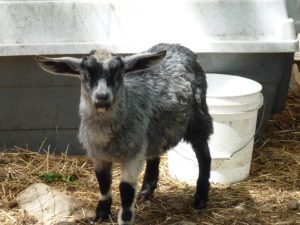 When asked about her greatest challenge Gabriella does not hesitate. “Time,” she says. “I’m only one person and there is always more to do.” The next stall of hungry kids punctuates her sentiment. The kids bleat with impatience, their knobby front legs knocking against the slats of their corral as Gabriella produces another bucket of milk and lowers it into the middle of the throng. Again, the goats fall upon the bucket and their cries instantly subside, replaced by the sounds of contented suckling.

Although she runs her farm single-handedly, Gabriella doesn’t work in isolation. She and neighboring farms have formed mutualistic relationships, helping each other maintain and expand their respective businesses in ways they could not on their own. One instance of this cooperation can be seen in Stony Creek’s partnership with Cream of the Crop Farm, another Local Hero member, located in Russell. Gabriella makes her cheese in their creamery, providing Cream of the Crop with rental income and allowing her to make cheese without building her own infrastructure. Gabriella also cooperates with other goat farms in the area. Registered bucks are expensive to purchase, so local goat farmers pool their resources to buy and share bucks for the mutual benefit of all. Gabriella also shares space in her store with businesses that are smaller than her own, currently carrying goat soap, handmade by a neighbor, alongside her own products. Cooperative relationships like these help allow different sized businesses to coexist at their own scale. No one needs to do everything on their own.

Gabriella does have plans for development, however. Ideally, she’d like to get more purebred Nubians and La Manchas and envisions Stony Creek as a relaxing family destination. Walking out of the barn and into the sun, she shades her eyes with one hand and gestures to different parts of her land with the other as she rattles off her ideas. Over there she plans to put picnic tables, and over there, plant an herb garden. She’ll clean up her berry bushes for a pick-your-own section and let children play with the goats while their parents relax, augmenting their lunches with her goat cheese, jams and jellies. It won’t happen overnight, but the process is something Gabriella cherishes. “It’s satisfying working towards a goal and seeing all your work pay off,” she says. Although she envisions changes at Stony Creek, Gabriella certainly has cause for gratification on this sunny day. From one goat to a hundred, she is steeped in the hard-earned rewards of her loving, dedicated labor.

Gabriella Steria and her goods can be found at: