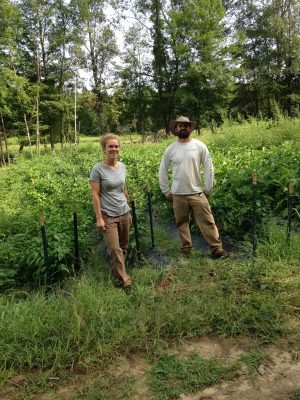 Five years ago, Alice Colman and Brian Cunningham looked out over the invasive Oriental Bittersweet vines that were creeping onto their recently-purchased Wilbraham farm property and they had one thought: goats. Stony Hill Farm is not certified Organic but Alice and Brian use organic growing practices so when noxious weeds came knocking, nature’s lawn mowers were the natural choice. When I visited the farm on a recent August morning, one bold goat strode right up to me, aiming a nibble at my audio recorder. Brian explained, “She’s the queen here. She’s the most territorial and she’ll investigate anyone new.”

A major motivator behind Alice and Brian’s emphasis on organic growing practices is borne out of their care for their eight hives of honey bees. Brian pointed out, “A lot of pesticides that you put down affect bees so the less that we use, the healthier they’ll be. Having a resilient set of insects living on the property makes a more complete resilient ecosystem on the farm.” The pair’s creative solutions to avoid chemical remedies don’t stop at the goats. To fertilize the soil in their high tunnels, they lay down a thick litter of leaves in the fall and then bring in their flock of chickens for the winter. Brian explained, “The chickens stay occupied through the winter turning through all that compost for the worms and grubs. The leaves are high in carbon and the chicken’s fecal matter is high in nitrogen. In the springtime we’ll just turn all that in and then put it into production.” To tackle the tick population in the woods surrounding the farm, Brian and Alice picked up 10 guinea hens which now roam the property. “Sure, we could have blanket sprayed everything with insecticide but that’s not what we’re about. We think about our health, the health of our bees, and the health of our ecosystem.”

It’s not surprising that Stony Hill Farm is chock full of innovative solutions given the couple’s background. Alice and Brian met more than a decade ago in Antarctica where they were both working in logistical support services for a scientific research station. From the South Pole, they moved to Hawaii where Alice pursued her PhD in Geology and Brian managed construction for a solar energy company.  After years on the island, it was time to move on.

Both Brian and Alice worked in farming during their youth and they were thrilled to return to those roots when a patch of land came up for sale in Wilbraham. The previous owner had been a small scale grower for years and the couple was glad to keep an old farm in production. Brian pointed out, “A lot of farms are disappearing and every couple of years another 10 to 20 acres that used to be agriculture becomes a subdivision. Sure, it’s more profitable for the landowner but it doesn’t help the community in the long run.” Today, Alice and Brian have expanded the farm beyond its previous size to include three acres of vegetables and flowers, a flock of egg-laying chickens, eight bee hives, a herd of goats, and, of course, the occasional guinea hen. Beyond growing food, their new solar energy installation produces enough energy to make the entire operation carbon neutral and energy net-zero!

As Alice and Brian walked me around the farm, it was easy to spot a variety of classic August crops, including lush rows of peppers and eggplants. As we passed a bed of husk cherries, Alice declared with a laugh, “They are so popular it’s ridiculous! We started growing them last year and it seems like as soon as somebody tries them they love them.” We strolled over to one of their high tunnels and when I pointed out that the trellised tomatoes looked astonishingly well pruned, Brian admitted, “There’s been so much rain the last 8 weeks that you just don’t want to work out in the field. You come in here and think, ‘Hey, I’m still working but I’m not getting rain dumped on me.’ Spend all that time in here and it ends up looking pretty nice.” There’s no question that the work paid off, their crop of Sun Golds, Pink Wonders, Red Beefsteaks, Ox Hearts, New Girls, Striped Germans, and much more looked fantastic! Alice gave a lot of the credit for their bumper crop of tomatoes to the move to the high tunnel. “We’re realizing how much it helps to have control over the environment. We have our tomatoes in one of the tunnels now and comparing that to last year when we had them out in the field, it’s just incredible how few problems we’ve had with disease and how much the quality and yields have improved.”

Stony Hill Farm also loves to take advantage of their high tunnels and greenhouses throughout the cold months of the year. They produce spinach, lettuce, baby kale, baby beet greens, radishes, arugula, and more all winter long. Alice is happy to point out, “It’s fun showing people how much you can grow in the winter here. People are always shocked when they find out that the spinach they’ve been buying from us all winter is actually grown on our farm.”

With the unpredictability of the weather over the past few years, it has been a tough time to establish a young farm. “Two years ago we lost crops to the drought so we invested in a bunch of irrigation equipment. Now we’ve got it this year and of course it’s raining about every other day so we don’t need it.” Despite the bumps along the road, Stony Hill Farm is approaching four successful seasons in the books. The next four seasons and beyond are sure to be filled with plenty of unexpected turns but you can be sure that Alice and Brian will be putting their heads together to turn those challenges into opportunities. And if we’re lucky, more goats.