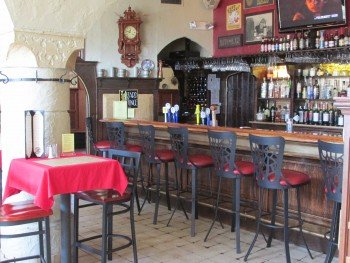 “I love seeing people just have a good time and walk out with a full belly,” says Liz Stevens, who manages The Hofbräuhaus in West Springfield with her husband Joe Stevens.  People are front and center at the Hofbräuhaus, and it’s clear that Liz’s interest in people is what motivates her in her work here. The restaurant, eighty years old and still going strong, serves up fine German, Bavarian, and international cuisine.  Customers can choose between eating outside in the biergarten, sitting at the bar, enjoying relaxed fine dining, or casual seating.  The restaurant offers several private rooms to host family or business events of any size and catering for off-site events. Beginning mid-September, you can also find The Hofbräuhaus’ food at the Big E food court in the German biergarten.   “There’s something for everyone here,” says Liz.  “You get really nice service, and it’s a very friendly, unpretentious place.”

The original owners of the Hofbräuhaus were from Germany and opened the restaurant as a fine dining establishment in 1935. “If you haven’t been to eat here, it’s a piece of history,” says Liz. Over the years, the restaurant has taken several different forms and garnered a strong base of regular customers. Joe has owned Hofbräuhaus for the past two decades; when he bought the restaurant, he already had two decades as a chef and restaurateur under his belt, serving first as Executive Chef at two Boston area restaurants, and then running the Marliave in Boston and the Glass Lilly in East Longmeadow.   Using fresh local produce was something he took for granted.  “We’ve been doing this for years,” Joe told me matter-of-factly.

New Lands Farm, one of only a couple farms remaining in West Springfield, supplies much of the restaurant’s local produce each week. In spring, all The Hofbräuhaus’ salad mix comes from the farm. In summer Liz buys a wide range of vegetables depending on what surplus New Lands Farm has in a given week – a flexible arrangement that works well for the farm and gives the restaurant access to the freshest local produce grown just a few miles away.  Liz believes in supporting neighboring farms and “using people from around here.”  Buying local builds community and supports the local economy, and when given the choice to buy vegetables from local or non-local sources, “of course you want them from an hour away,” says Liz.  “You know they’re fresher.”

The Hofbräuhaus features a wide range of traditional German specialties, like its namesake in Munich, Germany, but it doesn’t stop there. “It’s amazing food,” says Liz.  “We go way beyond Wiener Schnitzel… the menu is different and constantly changing.  We have the best lobster bisque on the face of the planet; our smoked salmon and tomato bruschetta is heavenly, and the thing you really want to try is the duck breast with sweet potato hash and raspberry glaze.”  All menu items are created from scratch –produce is never pre-peeled or pre-cut, and baked goods are all made at the restaurant.

Liz is a great conversationalist, and she loves sitting at the bar to meet and greet customers.  “If you’re lucky enough to sit next to me,” she says with a glint in her eye, “then you’ll really have a great time!”  She has a knack for storytelling, and you might hear about her “secret” marriage to Joe – so the story goes, they were married in the restaurant and back to work within a few minutes, letting the news slip to family and co-workers only a week later!  Or Liz might tell you of her adventures in raising backyard chickens, or of the rumors that friendly and mischievous ghosts haunt the restaurant (she challenges you to come late at night to try to see for yourself!).

What makes The Hofbräuhaus unique? “We have the food, you can’t deny that!” says Liz, without hesitation- and it’s some of the freshest food around, to be sure, served up with plenty of local personality. “There’s nothing like fresh blueberries, or fresh anything,” says Liz, who then confides: “Really, I buy from farms because I suck at growing my own – so I might as well pay someone!”  The other reason to come to The Hofbräuhaus may well be the people – relationships with customers, farmers, and workers alike are valued.  In particular, Liz clearly appreciates those she works with day in and day out – her husband Joe and her co-workers.  “My staff’s a trip!” Liz laughs.  Then, more serious, she follows: “Giving people the opportunity to learn and excel … that’s kind of what it’s all about.”