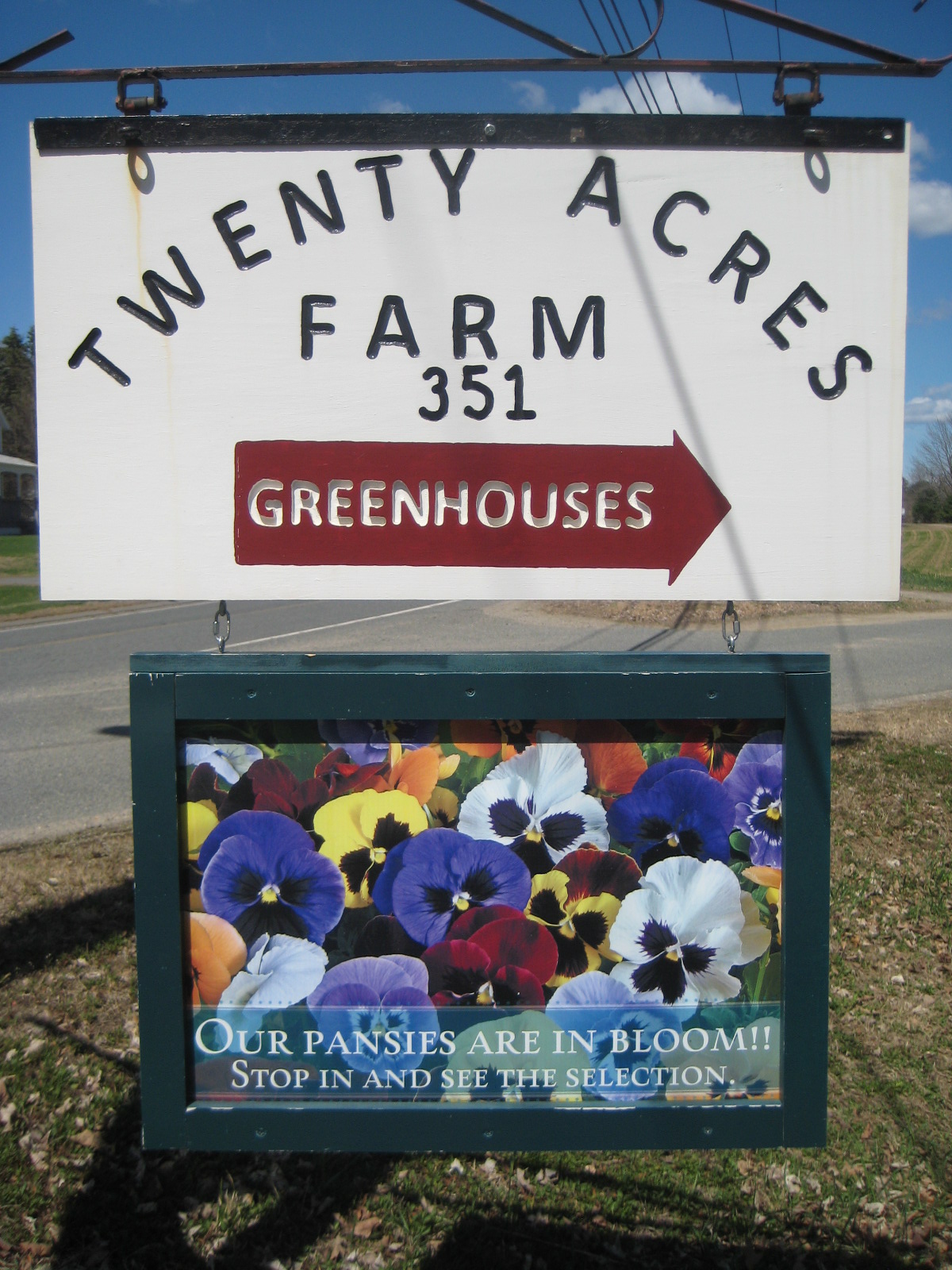 Tom Zuzgo’s relationship with his farm, Twenty Acres in Hadley, rivals the best stories of high school sweethearts. “I knew I wanted the land since I was 14 because I worked on it,” he explains. As a teenager, Zuzgo was one of many high school students working as part of a rotating crew picking tobacco on Hadley’s abundant farmland. “We would work 2 days here, 2 days there,” he describes, “So I worked here and I thought, ‘This is a nice place to have.’” Zuzgo was able to purchase the land in 1965, and from this romantic beginning he and his wife Pat developed a flourishing vegetable and flower business and raised children who in turn spent their own high school summers picking crops on the same Hadley farms. Raised with a love of this community along the Connecticut River, the Zuzgos are part of a tradition of Hadley farm families supporting each other and the land through good times and bad.

Despite his early affection for the land that was to become Twenty Acres Farm, to hear Tom Senior tell it, he didn’t always want to be a farmer. Growing up on a dairy farm in Hadley, the senior Zuzgo was clear at first that he wanted a different life for himself, and entered the field of heavy construction. Yet along the way, Tom Sr. bought the land he admired at age 14 and started developing a business. Not surprisingly, when asked about his early vision for the farm, he admits with a laugh, “I had no idea!” The farm evolved over time, as the Zuzgo family tried different crops and worked with whatever resources they had at hand. Potatoes were the farm’s first crop but, as Tom Sr. describes it, “that business went sour.” Then came tomatoes. “I always wanted to grow tomatoes,” Tom Senior explains. “So I started one greenhouse, then built a couple of others.” In the meantime, Tom Sr. and Pat sold vegetable starts for other local farms, and they began to plant the leftovers from spring sales: “Instead of just throwing it away, let’s see if we can move it.” In the midst of this, as Tom Senior describes it, “my wife happened to buy some flower seeds,” and from this humble beginning, Twenty Acres flower business was born.

While the Zuzgo family moved leftover vegetable starts from greenhouse to cropland, they faced another dilemma. “We planted them, but we didn’t know what to do with them!” Tom Junior jokes, as he remembers the early days of what eventually became a successful wholesale vegetable business. As the fields filled with celery, broccoli, cauliflower, zucchini, yellow squash, winter squashes, and greens, among other kinds of produce, Twenty Acres developed a customer base that now includes farmstands around the Pioneer Valley and stores such as Maple Farm Foods in Hadley. While the family prefers the simplicity of selling wholesale, the farm also maintains a stand of its own at the Route 47 Flea Market, where they have developed a loyal customer base. “People line up and wait for us,” Tom Jr.’s wife Joan Zuzgo says. As they conduct all their business, the Zuzgo family keeps the Hadley community spirit alive and actively supports other farmers in the area, pointing customers to other local farms in the event they are unable to fill an order.

Twenty Acres’ flower business has grown steadily from Pat Zuzgo’s initial acquisition of some flower seeds, with sales growing astronomically over the last twenty years. The family ascribes this success to the growth of cable TV. Joan explain, “The advent of HGTV in particular made a big difference. Suddenly, you’ve got gardening shows and celebrity gardeners. And you have brand name flowers.” While the booming business of flowers has been lucrative, it has also kept the Zuzgos on their toes, as styles in landscaping come and go. “You have to keep up with it,” Joan says, as she describes the changing tastes of consumers. “For instance, one year, they want foliage, the next year, they want floral.” But one thing never changes, Joan notes. “Most people want low maintenance. And we do annuals, which means season round color.”

The Zuzgos have experimented with crops that didn’t pay off – in addition to difficulties with potatoes, the farm also had an unsuccessful run at the tobacco business – but the family’s biggest setback occurred on December 18, 1993, when a fire destroyed an old barn that housed all of their farm equipment. In the wake of this tragedy, the community support for the Zuzgos was overwhelming. Friends and family flocked to Twenty Acres and had the barn rebuilt in 4 days. “People knew me and they just came in,” Tom Sr. explains. “Tom Jr. knew the rest of them.” While the trauma the fire caused is evident in the Zuzgos’ voices as they describe the terrible event, so is their overwhelming and continued gratitude for the Hadley community. “Even now we have friends and family that come up and help,” Joan describes.  “They just help.”

The sense of community the Zuzgos have always enjoyed in Hadley has expanded in scope over the past few years, as more people are supporting local agriculture. “Things have changed with the advent of CISA and getting the word out about local farms,” explains Joan. “People at the flea market come up to us and say “Thank you so much for what you do.’ People are so appreciative of local farming.” The increased community support is certainly a perk for all the Zuzgos, just one of many they are quick to describe as they name what they most enjoy about their farm. “There’s a camaraderie,” says Tom Jr., who adds, “You’d better like it when it’s almost 7 days a week!” Perhaps the greatest testament to the way Twenty Acres Farm has taken care of the Zuzgo family for all these years can be found in Tom Sr.’s quick recovery from having both knees replaced 10 years ago.  Contrary to his doctor’s expectations, the senior Zuzgo was back to work within two weeks of the operation. Says Joan, “With the farm work and getting back out, the doctors said he healed faster than some kids in their twenties!”

For more information about Twenty Acres Farm, including location, hours, and products, check out their page on CISA’s online guide.