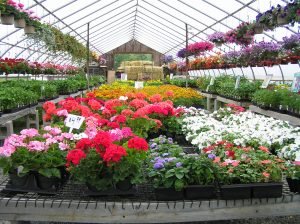 “It’s something that we literally built from the ground up. This was all just a hole in the ground,” says John Burney, gesturing toward the sizable spread of greenhouses brimming with flowers and vegetable plants at his farm stand in East Longmeadow. The stand at Meadowbrook Farm will soon be filled with sweet corn, tomatoes, squash and a full range of farm produce. For now, a table and the nearby U-pick fields display the first alluring harvest of the season: strawberries, the sort that drip down your chin with peak-season flavor.

Strawberries are what got John started in farming. “When I was a kid, for some reason I always wanted to farm,” John says, “but I never thought I’d be able to get into the production side of things.” John didn’t come from a farming family, but an opportunity to try it out came in college when he offered to help a retired dairy farmer with his small vegetable operation. In return, the farmer allowed John to plant 16 rows of strawberries around a utility pole in one of his fields.

From these humble beginnings, the farming bug stuck, and after graduating John continued to expand the strawberry operation part-time while working as a loan officer at Farm Credit. In 1989, he decided to quit banking and transition to full-time farming. “I just really enjoyed the farming,” he explains. “Being your own boss and working outdoors… you’re in charge of your own destiny. If you have a little luck, things generally go well.”

John’s steady optimism is clear. We talk amidst an unrelenting downpour, a reminder of the risks inherent in such a weather-dependent profession. A farm stand customer asks John if he’s worried about all the rain, but John just smiles and shrugs: “What can you do, hmm?”

John built his first greenhouse in 1990, and after the dairy farmer passed away John leased the land from the farmer’s son and then finally purchased the 30-acre farm. He kept expanding the wholesale vegetable business, pedaling his produce to Big Y’s distribution center in Springfield, Stop & Shop and other stores, in addition to selling at the stand. He sees his ongoing relationship with Big Y as a contributor to the long-term success of his farm. In return for providing a consistent, quality product, he feels he gets a fair price and reliable markets. “Big Y is truly committed to buying locally,” he says. “They’ve enabled me to grow.”

As his business has grown, John has continued to pick up more land when he could. Farmland is in short supply here – originally a farming community, now there are only a few full-time farms left in East Longmeadow. Development pressure and high land prices are a clear threat to the future of farming here. As John puts it, “The big problem with farming in this area is that the ‘highest and best use’ of the land is not agriculture – the ‘highest and best use’ is developing the land. So the big challenge is going to be, how do we preserve our farmland? How do you preserve the little land that’s left?”

State programs like Chapter 61A that lower taxes on land actively used for farming are one solution. The Agricultural Preservation Restriction (APR) Program also has had significant success in protecting farmland through purchasing the development rights. In areas with especially high development pressure, though, there are still challenges. “The state purchasing development rights is a good program, but they have to get in tune with the real value of the land,” says John. “You’ve got to be fair to landowners.”

For his part, John tries to seize opportunities to protect his land base as they arise. “As pieces come available I have to buy them,” says John. “Once it goes into houses it never goes back.” Having started out on ¾ of an acre, John is now farming 275 acres. He owns 110 of these, having just closed on a 60-acre tract of prime farmland in neighboring Somers, CT this past week.

It’s clear from his actions that John has a different take on what the ‘highest and best use’ is of prime farmland. When purchasing farmland, “It wasn’t just dollars and cents I was interested in,” says John. His priority is to produce food, and to maintain a lifestyle he values. After all, he says, “I’m a farmer and that’s what I do.”