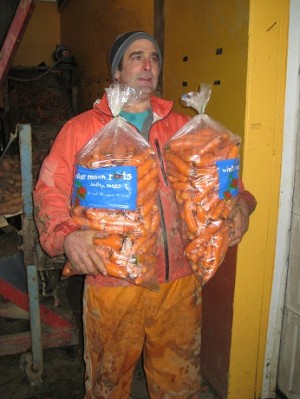 Driving north on Route 47 through Hadley it’s hard to miss Michael Docter’s barn. It’s the one with 158 solar panels arrayed on its southern-facing roof. The barn is used to store tens of thousands of pounds of organic carrots, parsnips, beets, turnips, and radishes that Winter Moon Farm grows each summer on about ten acres. The solar panels generate 45 megawatts, four to five times the amount of electricity needed by the farm. They power a computer and fan which regulate the cold winter air flowing into the storage system, allowing Docter to store crops at the optimum temperature without refrigeration.

Since Docter aims for the farm to be carbon-neutral, he and a friend use cargo bikes to deliver vegetables throughout the winter to Winter Moon’s accounts in Hadley and Northampton. By early March 2012, they had transported by bicycle more than 23,000 pounds of the 2011 harvest to Smith College, Whole Foods, and other customers within a few miles of the farm.

Though Winter Moon has just completed its third season, Docter has been farming in the Valley for several decades. In the early 1990s he founded the Food Bank Farm, which pioneered the concept that organizations supplying food to families in need could produce some of that food themselves. From 1991 to 2009, the Food Bank Farm in Hadley raised organic crops that supported 700 CSA shares, feeding approximately 1,200 local households. In addition, each year more than 200,000 pounds of vegetables were donated via the Food Bank to food pantries throughout the region.

Each season the thirty-two acre Food Bank Farm, farm store, and farm kitchen used apprentices. Docter’s motto was to “hire well and delegate even better.” Using this approach he mentored numerous young farmers who after a few seasons went on to establish their own organic farms, including Next Barn Over in Hadley, Mountain View Farm in Easthampton, and Riverland Farm in Sunderland.

CISA honors Michael Docter for his commitment to innovation and renewable energy, leadership in organic farming and mentoring new farmers, and making farm-fresh food available to the entire community. Docter has been a leader in building the local food system we now enjoy in the Valley.