Opinion: Future of Farm Shares in the Valley 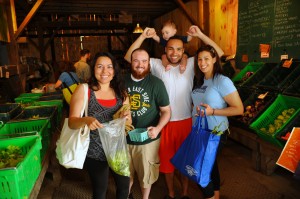 It’s the end of March, which means that local vegetable farmers are busily working in their greenhouses, planting the seeds that will soon grow into this year’s harvest.

And, because most vegetable farmers in the Valley manage complex operations that produce many different crops for multiple markets, they’ve already mapped out the journey that most of those seeds will take, from planting to harvest and sale (with, of course, a huge margin of weather-related error!).

For most vegetable producers, it’s going to be another month or two before the very earliest crops are ready for harvest, which means another month or two until they start seeing any money to cover the costs they’ve already borne, including the seeds in the greenhouse and the labor that put them there. Farms have historically survived this lean time through a combination of careful financial management and reliance on credit, but in the mid-1980s, a new sales model emerged to address this challenge.

On a Community Supported Agriculture (CSA) farm, consumers commit to supporting the farm by purchasing a “share” of the harvest up front. This generates an income stream for the farm during the winter and early spring, when expenses are building up, and it frees the farmer from managing produce sales during the growing season. In turn, shareholders (or members, as they are often called) receive weekly distributions of the farm’s harvest, often at a value that outstrips the up-front fee.

In the 30 or so years since the CSA model was established in the United States (one of the longest-running is South Amherst’s Brookfield Farm), it’s quickly spread throughout the country and taken root here in our region. According to the Community Involved in Sustaining Agriculture’s own tracking, there were 19 farms offering CSA shares in the Pioneer Valley in 2007, and in 2016, there were 60.

And it’s not just the numbers that have grown — it’s the variety, too. The first farms to offer CSA shares were vegetable farms, but today in the Pioneer Valley you can find fruit, meat, herb, plant, and mushroom CSAs, and many farms offer their shares year-round.

The increased availability of CSAs has not necessarily corresponded with a big jump in food dollars going directly to local farms. The most recent federal agricultural census, which was conducted in 2012, showed a 23 percent increase over the 2007 census in the number of Pioneer Valley farms selling their products directly to shoppers through farm stands, farmers markets, and CSAs. During that same time period, the total value of the products sold directly to consumers increased by only 5 percent (accounting for inflation). In other words, quite a few more farms are dividing up not a lot more dollars.

So what does all this mean for the future of the CSA model in our region? If only we could say! The farm share concept has certainly become central to conversations about local food, and many farms, both new and well-established, have tested the CSA model over the last 10 years.

For most of them, the CSA model hasn’t proven to be a panacea for all the financial challenges that local farms face. But it does offer real benefits, including much-needed cash flow early in the season and a guaranteed outlet for their harvest, not to mention the community of regular patrons who are deeply invested in the farm.

Choosing to buy a CSA share brings real benefits to shareholders, too: plenty of the freshest local food all season long, sharing in the bounty of bumper crops, and a strong connection to the seasons, the land, and the people who grow your food. And as the model has matured, many CSA farms offer much more flexibility to shareholders, including product choice at pickup, payment plans and sliding scales, varying share sizes, SNAP/food stamp payment options, off-farm distribution sites, and multiple distribution days.

If supporting local farms is important to you, purchasing a CSA share is an excellent way to put your food dollars directly toward a farm’s bottom line. As the days grow longer and tiny sprouts emerge in greenhouses throughout the Valley, this is the perfect time to find your farm share!