Pascommuck Conservation Trust was named for Easthampton’s earliest known settlement in the late 1600s. The Native American word “Pascommuck” means “where it bends,” a reference to the nearby oxbow of the Connecticut River.

Founded in 1982, Pascommuck’s mission is to protect important land and other natural resources in Easthampton for the public benefit. Pascommuck’s early priorities included establishing a greenbelt along the Manhan River. As the major tributary flowing through Easthampton to the Connecticut River, the Manhan continues to be a focus area for the organization. Preservation of Easthampton’s farmland has also been a priority, given the importance of local agriculture throughout the town’s long history. 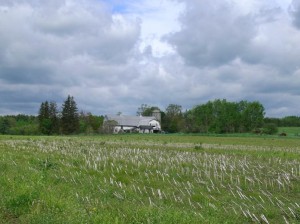 Recently, Pascommuck helped protect Echodale Farm, a Local Hero farm and 165-acre property in the Park Hill area of Easthampton that is the largest farm in Easthampton and has gorgeous views of Mt. Tom. Formerly a dairy farm, Echodale is now part of a 400-acre block of agricultural and forestland preserved in perpetuity. It was a priority to ensure that Echodale would remain an active farm, provide public access to the scenic Park Hill area, and protect habitat for both plants and animals along Bassett Brook, which runs into the Manhan River.

Pascommuck led a successful effort to generate broad community support for the Echodale project, raising $300,000 toward the $2.85 million needed. The Trust for Public Land, the City of Easthampton, and the state’s Agricultural Preservation Restriction Program were critical to Echodale’s preservation, which was completed in 2008. 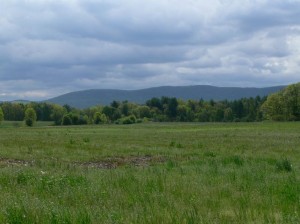 Gail Flood and Rodney Britt, who purchased the 140-acre farm, farmhouse, and outbuildings in 2008, are raising bees and heritage livestock breeds as well as vegetables and flowers for retail sale. As part of Echodale’s preservation, 25 acres across the road from the farm was protected as a City of Easthampton conservation area, which includes 40 community garden plots. Walking trails are planned through the conservation area and around the perimeter of Echodale Farm.

Currently, Pascommuck stewards 18 properties in Easthampton, comprising approximately 225 acres. As an all-volunteer land trust, Pascommuck attributes its success to good working relationships with the City of Easthampton and larger conservation organizations such as the Trust for Public Land and the Trustees of Reservations. With an active membership of about 125 people, led by a 14-member board of directors, the group is always seeking to connect with others who are passionate about land conservation.

For information about Pascommuck’s current projects, as well as descriptions and maps of eight conservation areas in Easthampton, visit pctland.org.