Since Jared Sena was a kid, March has meant spending hours in the boiling room while his father, Paul Sena, boiled sap down into maple syrup. The Sena family, along with their partners David Gage and Richard Mansfield, has been making maple syrup each spring for decades on Hickory Hill Farm. A few weeks back, right before the busy season kicked in, Jared took me for a tour of their property in Worthington. 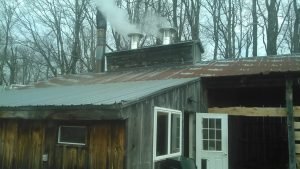 Hickory Hill Farm taps over 10,000 maple trees each year for sap. The taps can hurt the tree if they stay in year-round, which means that the Sena family must trek through their sugarbushes (collections of maple trees) each February to install thousands of new taps. The image of metal buckets hanging from maple trees is quintessentially New England but for a big maple farm like Hickory Hill, a system of vacuum-pressurized lines carry the sap down to centralized collection bins. Of course, the lines come with their own challenges and ‘walking the sugarbush’ is a constant job during the season as Paul and the team check the pressure, identify leaks, and trouble shoot repairs.

Once the trees are tapped and the lines are functioning, the team has no choice but to wait on mother nature. Maple sap flows when the temperature is below freezing at night and above freezing during the day. This sweet-spot weather window typically runs from February through mid-April.

Once the weather falls into place, the sap begins flowing down into the massive collection bins at the base of each sugarbush. Paul collects the sap from the bins in his flatbed truck and drives it up to the Hickory Hill Farm sugar house. When the raw sap is collected from the trees, it only has 1.5-2% sugar content, meaning it takes 45-50 gallons of raw sap to make a single gallon of finished syrup. The purpose of the complex boiling process is to concentrate the sweet, watery sap from the trees into the thick syrup that we all love with breakfast. The team maintains a blazing fire below the float tank as the sap flows in. The tank is wide, which spreads out the sap and creates a large surface area to be blasted by the heat of the fire burning below. Before long, the sap will reach a rolling boil. As the water evaporates, leaving the sugars behind, the sap becomes more and more concentrated. By the end of the process, the thick syrup that’s left is nearly 70% sugar. 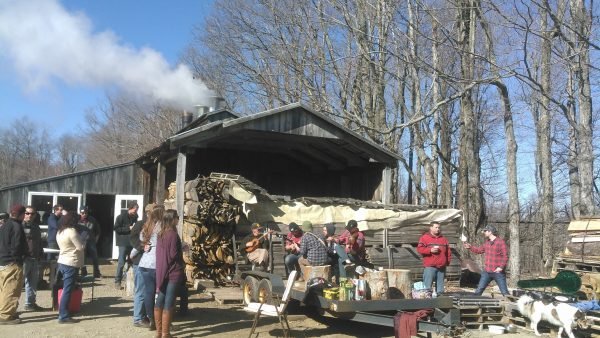 Hickory Hill Farm produces over 3,500 gallons of maple syrup most years and you can find the delicious fruits of their labor around the Valley. Their syrup is for sale at River Valley Coop in Northampton and you can also enjoy it with breakfast at many restaurants including Sylvester’s, the Bluebonnet Diner, The Roost, and more. For dairy lovers, Hickory Hill provides the syrup for Sidehill Farm’s maple yogurt.

The center of Hickory Hill Farm is a big red barn. When Paul’s father ran the farm, it was stuffed to the brim with potatoes. Since then, the barn has been home to an auction house, a cross country ski resort, and a hot air balloon business. These days, Paul’s son Jared spends his day in the barn perfecting recipes for his new brewery, which he hopes to open soon. Through those many decades and businesses, maple has been a constant on the farm. As the new generation, Jared hopes to keep it that way. After all, how else would he be able satisfy his maple syrup addiction? As he puts it, “if you haven’t tried maple syrup mixed into your mac n cheese, you’re missing out!”