MONTAGUE CENTER — A new farm store and bakery is growing where a bar once stood.

Red Fire Farm is readying its latest venture — Red Fire North: A Farm Store and Bakery on Route 63 — on the site of the former Montague Inn. 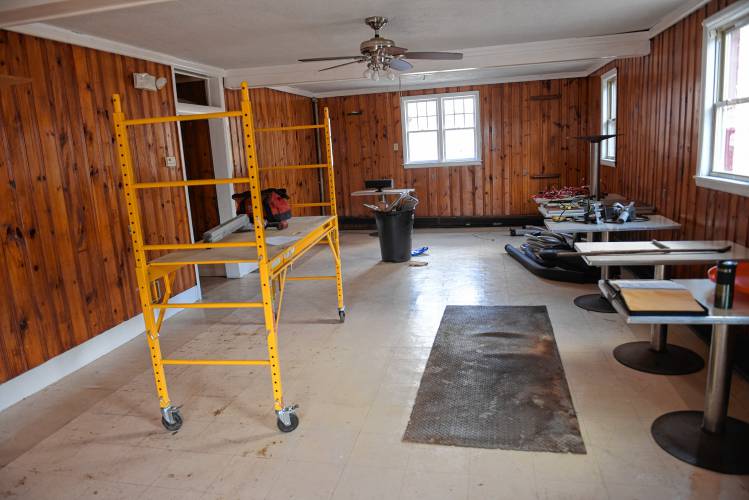 The old Montague Inn on Rt 63 in Montague Center that will be a farm store and bakery called Red Fire North. March 29, 2017.Recorder Staff/Paul Franz—Paul Franz

The new venture is seen as an outlet for produce from Red Fire Farm, as well as foods made from surplus produce made in a commercial kitchen there.

There are also plans to sell other local farm products, breads and bakery items and the new shop will combine the green thumbs of Ryan and Sarah Voiland’s farm, as well as the baking skills of Ryan’s father, Paul, who is now at work converting the 1,800-square-foot space that will eventually replace the Old Depot Gardens retail outlet that he and his wife, Jean, run on Turners Falls Road.

“We think a bakery’s a really good draw. People like bread,” said the elder Voiland, who also plans to sell his own pizza at the new outlet, and who used to be run a bakery in Ithaca and Cortland, N.Y.
“We’re trying to hit this little sweet spot. The bakery will use local farm products,” he added, and may eventually provide a way for the farm to eventually grow grains.

“There’s a whole bunch of strings we’re trying to put together here, providing nutritious foods and having fun doing it,” he said.

Voiland, who works as a heating, ventilation and air conditioning contractor and sees this project as a way to transition into retirement, is planning for the concrete building to get solar panels as well as a roughly 800-square-foot greenhouse for “more of a barn-like entrance.”

He said he hopes to have the new store open by May or June, and that, depending on the schedule, customers may still be able to find bedding plants at the Old Depot Gardens store.

The plan, Voiland said, is for the new store to give the Voilands’ daughter, Kara, who has disabilities, the opportunity to work there, along with other employees who could benefit from a sheltered workshop setting.

The “Red Fire North” name is to distinguish the store from Red Fire Farm South, which is in Granby.

Farmer Ryan Voiland said of the new venture, “We hope sales will go well there, and it will be an outlet for our produce, for our neighbors and other Franklin County residents.”

“We hope it will create some opportunities for value-added products. And then there’s the bread component, and we’re excited about that.”

The Montague Inn, which had been at its location just north of the Route 47 intersection since 1954, had originally been located where the Montague Center Post Office sits.