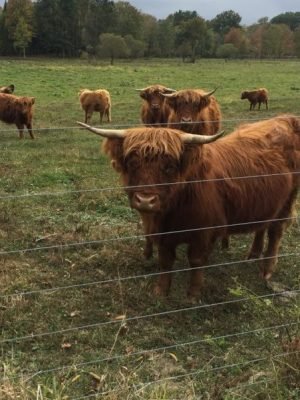 creatures roam in Julie Chalfant’s  backyard. The creatures are Highland cattle, a breed originating in Scotland. Highland cattle have found a home on Roaming Farm for ten years, under the care of Julie, her husband Steve, and their two kids. I took a walk around the farm with Julie on a crisp October afternoon.

Pasture begins almost immediately behind the Chalfant family house. On Roaming Farm, there are eight pastures that the cows rotate through. Highland cattle are browsers, and will eat twigs, branches, leaves, grass, even poison ivy. The cows needed little help from the farmers to change the landscape of the farm to their liking when they first arrived. Julie points out an area outside of the fenced, grassy pasture. It’s covered in bushes and brush. “This field looked like that when we bought it, and they just ate everything.” Highland cattle “basically take care of themselves,” she says.

As we walk toward the pasture, Julie tells me about the uniqueness of Highland beef. Beef from Highland cattle is lean, tender, and flavorful. It is lower in cholesterol and fat and higher in iron and protein than other breeds of cattle. The secret is partially in the fur of the cows—right now, they are growing a wooly winter ‘undercoat’ underneath their distinctive long fur. This wooly layer keeps them well insulated, which is why they don’t have the layer of back fat that other cows have. It also means they can stay outside through the winter. Another reason why Highland beef is special is because Highland cattle are slow growing. They mature at two to two and a half years, while other breeds like Herefords mature at around eighteen months. In this pasture, calves and cows up to three years old graze together.

As we near the fence, many of the cows amble over, some mooing. “They want snacks,” Julie tells me. A few of them ignore us, munching away. A calf peeks out from behind its mother.

The farm is beautiful, with one hundred acres of varied terrain. On our walk, we cross a trickle of the Mill River (Julie makes sure my boots are waterproof), pass through a grove of Christmas trees, and under an archway of white pines. On the western end of the property, the leaves are changing dramatically in the hills. The Christmas trees were planted by a previous owner of the land, who also planted a handful of apple trees. As we weave through the immature pines, stepping over ruts in the ground, Julie tells me about the social lives of the cows. “There’s a lot of social interaction that goes on,” she says. For example, the bull in the herd, Dodge, will occasionally hook his horns into the branches of trees to shake down apples or leaves for the other cows. “He’ll just stand there holding the branches down while the lady cows come and eat the leaves!” It’s clear that over the 10 years Roaming Farm has existed, Julie and her family have gotten to know these cows well. 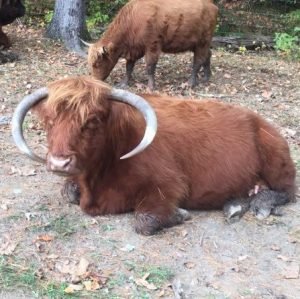 As we wander through the trees looking for the rest of the cows, Julie tells me the story of the first calf born on the farm. The calf was the first born to its mother, Jackie. “Some cows,” Julie tells me, “will keep their calves with them all the time, and some will stash them away in the grass to return to later.” Jackie was one of the latter, and on one occasion neither Julie, Steve, nor Jackie could find the calf. The three of them walked through the property, looking under Christmas trees until Julie found the calf and returned it to Jackie. Hiding spots like this serve an important purpose—pastures on the farm are combination open and wooded, providing the cows with grass to graze on as well as trees for shade and windbreak.

Part of the farm’s mission is animal welfare. On Roaming Farm, calves stay with their mothers for about a year. When they are weaned, Julie says, “They barely even notice!” Instead of separating the calves from the herd, Julie and Steve pull the mothers out, leaving the calves with the herd while they are weaned. The cows on Roaming Farm are not given any hormones or antibiotics for growth. Roaming Farm also works with the slaughterhouse where they send their animals, Adams Farm, to ensure humane and USDA certified meat processing.

Towards the end of our walk, Julie and I come upon the rest of the cows. “There they are!” Julie says, noting, “It’s surprising how cow-like stumps can look!” The cows are lounging and munching on grass, striking hills standing in the background. One of the newest calves in the herd eyes us warily, and Julie tells me the names of some of the older cows. Julie’s husband, Steve, is nearby, cutting wood. “They came here because they think I have something for them,” he chuckles. “Like I can just instantly materialize something exciting!” Eventually, Julie and I walk back towards the house and the road, and the cows continue lounging and munching. The hundred acres of Roaming Farm is theirs to wander. Here in South Deerfield, the cows and the Chalfants live alongside each other as neighbors.

You can buy Roaming Farm beef at the farm in South Deerfield on Saturdays between 9 a.m. and noon, or by appointment. Julie and Steve sell almost anything you could want, from single cuts and ground beef sold by the pound, to a quarter, side, or whole cow. When you buy in bulk (quarter, side, or whole cow), you can build your own package, mixing different cuts. You can also purchase “Good Deed” packages, which donate a portion of beef to The Food Bank of Western Massachusetts. Prices and more details are available at roamingfarm.com.